It’s well established that developers want to work with a database that offers flexibility, versatility, and ease of use. Scalability and reliability certainly don’t hurt either. For an increasing number of developers, MongoDB is the desired solution to meet all these requirements. And for the second year in a row, this has been validated by the opinions of those who matter most — developers themselves.

Today, we’re excited to announce that, for the second year in a row, MongoDB is the most wanted database in the Stack Overflow Developer Survey 2018, the world’s largest developer survey with over 100,000 respondents. 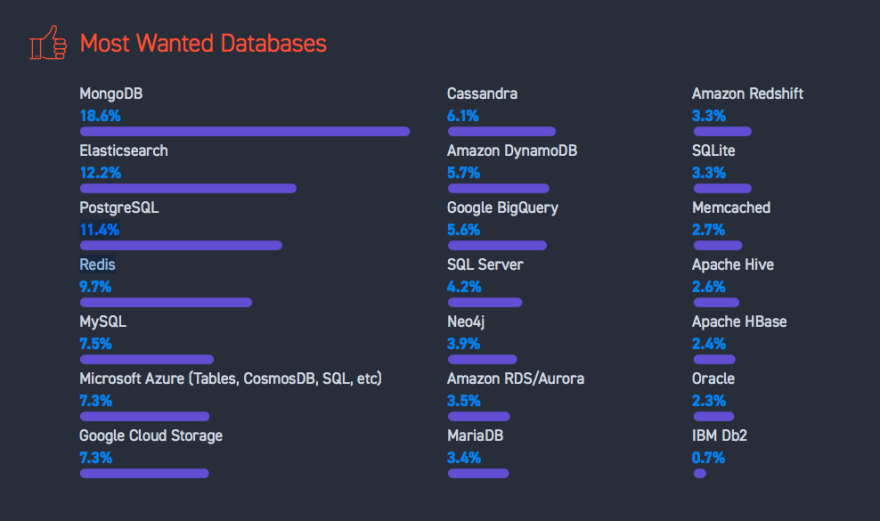 Since its debut, MongoDB’s popularity among developers has steadily increased. This popularity has been driven primarily by the platform’s ease of use and flexibility; more recently, the release of the fully managed database service MongoDB Atlas has made it easier than ever to run the database in any of the major cloud platforms.

MongoDB continues to innovate, listening and reacting to the demands of developers from small startups to the largest of enterprises. New and exciting features to the platform include change streams, which push real-time data updates to downstream applications, retryable writes, which enhance reliability without increasing complexity, and the announcement of multi-document ACID transactions, coming in version 4.0 later this year.

MongoDB’s document model offers developers massive increases in productivity by allowing developers to store data in a way that is consistent with how they think and create applications. Additionally, MongoDB’s native replication and horizontal partitioning give developers the confidence and freedom to concentrate on differentiating code without having to be concerned about challenges associated with data locality, reliability and scalability. Lastly, MongoDB offers the freedom to run consistently all the way from local development environments to the largest mainframe deployments. The database can be deployed on-premises, in a hybrid cloud, or in any of the public clouds.

How can you benefit from this news?

Hiring managers seeking talented developers may do well to review some of the additional statistics included in today’s release. One interesting statistic can be found in the chart entitled “How Developers Assess Potential Jobs”. If you are a hiring manager and you’re looking to attract top talent, considering the most wanted database platform might be a way to enhance the attractiveness of your opportunities.

Javascript and Python developers reviewing the Stack Overflow report will be encouraged as these development environments continue to grow in popularity. Popularity of web application stacks like MEAN or MERN have provided Javascript developers with frameworks for building applications quickly. 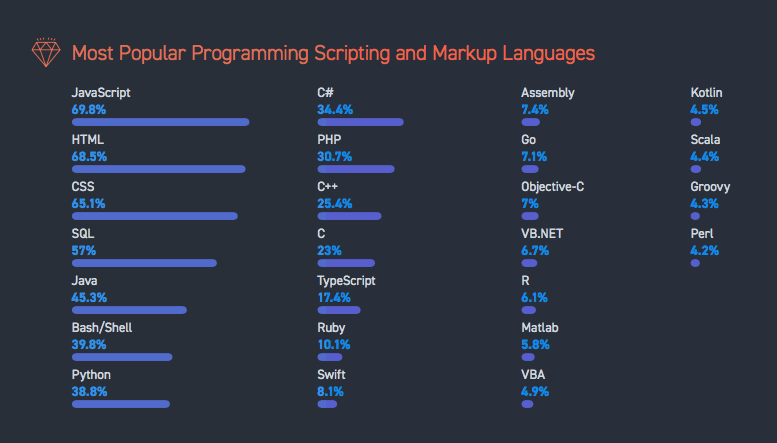 Not using Javascript or Python? MongoDB offers full support for these and all popular development languages. Want to use Golang with MongoDB? A fully supported MongoDB Golang driver has reached Alpha stage in development, giving even more options to developers to build with the latest and most popular languages.

Developers are the new Kingmakers and their opinions are vitally important. The results of the Stack Overflow survey are an exciting validation of MongoDB’s efforts to build a resilient, flexible, and easy-to-use platform wanted by developers the world over.

Are you looking to learn more?

Want to build right away with MongoDB? Get started today with a 512 MB database managed by MongoDB Atlas here.

How to Create Relationships with Mongoose and Node.JS

How to make your MongoDB container more secure?