You've probably heard the buzz-phrase "Internet of Things" (IoT) - but do you really know what it means? I'll be the first to admit, I had no clue what this fancy sounding thing was, when I encountered the term. enter inspiration for this post I'm here to help break down the fundamentals of the Internet of Things, so that beginners like myself can get a grasp on this exciting technology.

The Beginning of IoT:

The term Internet of Things was originally coined by Kevin Ashton in 1999. Realizing the potential of radio-frequency identification (RFID) in supply chain, Kevin was passionate about bringing RFID to the forefront of business strategy. He later founded the Auto-ID Center at MIT which served as a catalyst for RFID research across the globe.

Although Kevin Ashton gets kudos for coining the IoT buzzword, legend has it that the first IoT device was a Coke machine at Carnegie Mellon in the 1970s. Tired of walking down lengthy hallways only to arrive at an empty vending machine, researchers in the Computer Science department decided to track the Coke machine's inventory remotely by monitoring the lights, which indicated stock levels, and temperatures of the sodas. This tracking program was hooked up through ARPANET so that anyone at Carnegie Mellon could see the status of the vending machine.

Despite these early pioneers, the development of IoT was initially slow to progress, as supporting technologies such as RFID and cellular/wireless networks were not yet developed enough to support its full capabilities. However, monumental strides in technologies such as broadband internet, wifi/cellular networks, and affordable, efficient hardware have since helped enable the rise of IoT.

How to Define IoT:

So what exactly does IoT mean? The Internet of Things is any network of devices which collects and shares data through means of the internet. Often times, these devices don't even require the interaction of humans and the data it collects and transmits, is analyzed in real time.

Some examples of the prevalence of IoT are:

One perk of IoT is that these smart products aim to make our lives easier. Instead of having to check or change things manually, IoT products can automatically keep track of different metrics or settings, and with a simple click of a button, allow humans to complete tasks. They allow us to control devices remotely (such as turning on the oven while driving home from work), voice commands into our televisions, change traffic lights to mitigate congestion, and even remind us when to move our feet to stay healthy.

These devices are also opening up endless possibilities for data analytics. As we continue to use smart devices, companies are able to collect more and more data on our behavior. On one hand, this accumulation of data allows for companies to invent smarter machines which will better suit our needs in the future. On the other hand, companies are now privy to our every move and could even know our exact location at any given time.

Devin Pickell has a great intro to Data Analytics if you want to learn more about how companies may utilize this data.

How Does IoT Work?

In a nutshell - your smart device communicates through the internet to reach your remote, which has the ability to communicate directions back to the smart device (such as stop music or turn off lights). Data sent between can also be stored in locations such as the cloud, local databases or any of the devices. 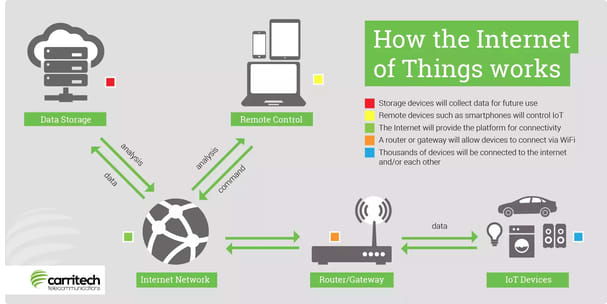 I hope that this post helped to serve as introduction to IoT because it isn't going away anytime soon. The IoT market was estimated at $170 billion in 2017 and predictions estimate that by 2022, the IoT market will be around $561 billion. As companies continue to collect more data and manufacture smarter devices, we can expect more and more integrated technology to be at the touch of our fingertips.

15 Command Line Tools which Spark Joy in Your Terminal