Welcome! Happy to see you in the seventh part of my Vuejs Amsterdam Conference 2022 summary series, in which I share a summary of all the talks with you.

You can read my JSWorld Conference 2022 Summary series (in four parts) here, where I summarized all the first day’s talks. You can also find the previous Talks of the Vue Amsterdam conference 2022 in my blog.

After two and a half years, JSWorld and Vue Amsterdam Conference were back in Theater Amsterdam between 1 and 3 June, and I had the chance to attend this conference for the first time. I learned many things, met many wonderful people, spoke with great developers, and had a great time. On the first day the JSWorld Conference was held, and on the second and third days, the Vue Amsterdam.

The conference was full of information with great speakers, each of whom taught me something valuable. They all wanted to share their knowledge and information with other developers. So I thought it would be great if I could continue to share it and help others use it.

At first, I tried to share a few notes or slides, but I felt it was not good enough, at least not as good as what the speaker shared with me. So I decided to re-watch each speech, dive deeper into them, search, take notes and combine them with their slides and even their exact words in their speech and then share it with you so that what I share with you is at least at the same level as what I learned from them.

Everything you read during these few articles is the result of the effort and time of the speaker itself, and I have only tried to learn them so that I can turn them into these articles. Even many of the sentences written in these articles are exactly what they said or what they wrote in Slides. This means if you learn something new, it is because of their efforts.

Last but not least, I may not dig into every technical detail or live codings in some of the speeches. But if you are interested and need more information, let me know and I’ll try to write a more detailed article separately. Also, don’t forget to check out their Twitter/Linkedin.

Here you can find the program of the conference:

Our mission at @nuxtlabs is to provide the best Developer Experience to deliver the best User Experience for your end users. We are doing this with Nuxt for six Years now.

Nuxt is a web framework for creating any kind of Vue app. That means you can do:

Since the beginning of Nuxt in October 2016 it has been downloaded about 46M times on npm, has 300k live websites, and 18k GitHub contributors.

A comparison between Nuxt 2 and Nuxt 3

This is a hello world bundle size comparison between Nuxt 2 and Nuxt 3: 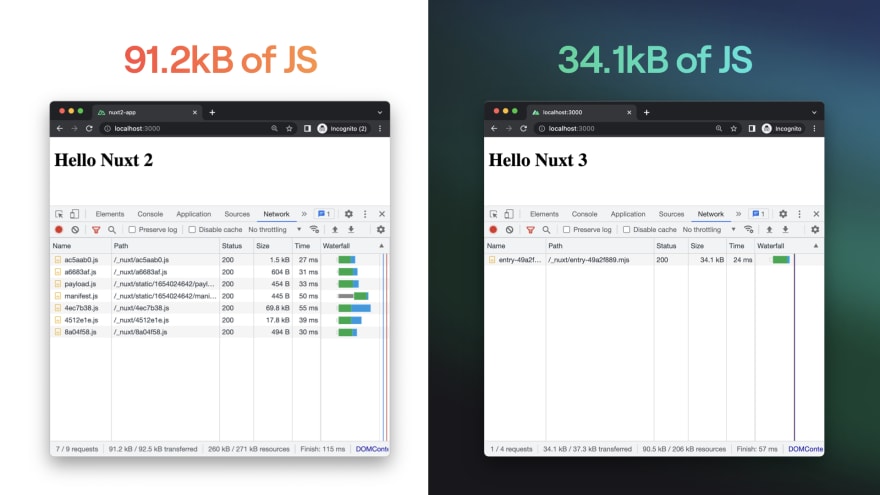 One of the reasons Nuxt 3 is so much smaller is that it's tree shakable, like Vue 3. So if you don't use a feature, it will not be included in the bundle.

The Next equivalent bundle size is around 80kB.

Edge Side Rendering - also named JavaScript containers by Ryan Dahl - is the capability of running JavaScript at the CDN nodes somewhere around the world close to the end user.

Some of the Edge computing providers right now:

Nuxt Content is a Nuxt module that reads Markdown, YAML, CSV, and JSON files in the content/ directory to create a powerful data layer for your application and Content V2 is out now with more features.

End of the Eighth Talk

I hope you enjoyed this part and it can be as valuable to you as it was to me.

Over the next few days, I’ll share the rest of the talks with you. Stay tuned…

Once suspended, mohsen_vaziri will not be able to comment or publish posts until their suspension is removed.

Once unsuspended, mohsen_vaziri will be able to comment and publish posts again.

Once unpublished, all posts by mohsen_vaziri will become hidden and only accessible to themselves.

If mohsen_vaziri is not suspended, they can still re-publish their posts from their dashboard.

Once unpublished, this post will become invisible to the public and only accessible to Mohsen Vaziri.

Thanks for keeping DEV Community 👩‍💻👨‍💻 safe. Here is what you can do to flag mohsen_vaziri:

Unflagging mohsen_vaziri will restore default visibility to their posts.