There are three possible sources of uncertainty: 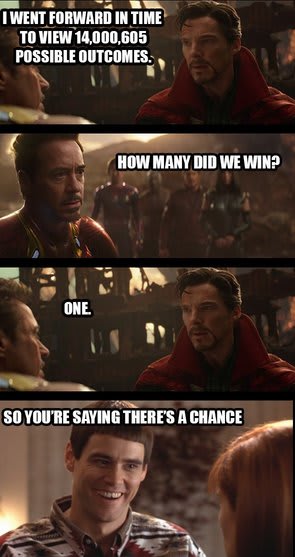 When Dr. Strange said we have 1 in 14 million chances of winning the war, he practically saw those 14 million futures, this is called frequentist probability, which defines an event's probability as the limit of its relative frequency in a large number of trials. But not always do we have Dr. Strange's time stone to see all the possible futures or events that are repeatable, in this case we turn to Bayesian probability, which uses probability to represent a degree of belief for certain events, with 1 indicating absolute certainty and 0 indicating absolute uncertainty.

You can read this section and the following topics:

at Deep Learning With TF 2.0: 03.00- Probability and Information Theory. You can get the code for this article and the rest of the chapter here. Links to the notebook in Google Colab and Jupyter Binder are at the end of the notebook.

Why you should invest in Julia now, as a Data Scientist