Hi all! I'm Marc and I'm currently learning Unity. The way I learn best is to first consume a whole lot of videos on a topic and then start a real project.

So why a public devlog?

To recap my learnings I will post most of the stuff here on dev.to. On the one hand those are general Unity learnings (you will find these in my "Digging into Unity" series) and on the other hand it's some kind of diary about the progress of my own project (this devlog).

This is by no means a perfect solution or way but I find devlogs of others even more interesting than a presentation of a finished project. With finished projects you are missing the most important parts: the thought process. How do you get from one thing to another?

Notice: my devlog will be a beginners devlog, I will run into the wrong direction here and there until I figure out a better way (or never if I don't and nobody tells me).

So let's talk about the project. When I create something for learning it needs to be something that's real. If I just follow practical tutorials I won't turn on my brain.

So I need an idea that has potential to grow and where I can dive into deeper topics. Furthermore it's scope should not be too big, e.g. at this stage I don't want to deal with things like scaling and performance optimization or heavy visual effects and such.

I will create an online Foosball game. So I have been working for a few years in an internet agency that had a foosball table in the office and it was so fun to me. Unfortunately other agencies didn't allow them because they were too loud, also nowadays during Corona times you cannot enjoy playing such a game with others. So I want to recreate the emotional gameplay that you have when playing a real foosball game in a digital way. 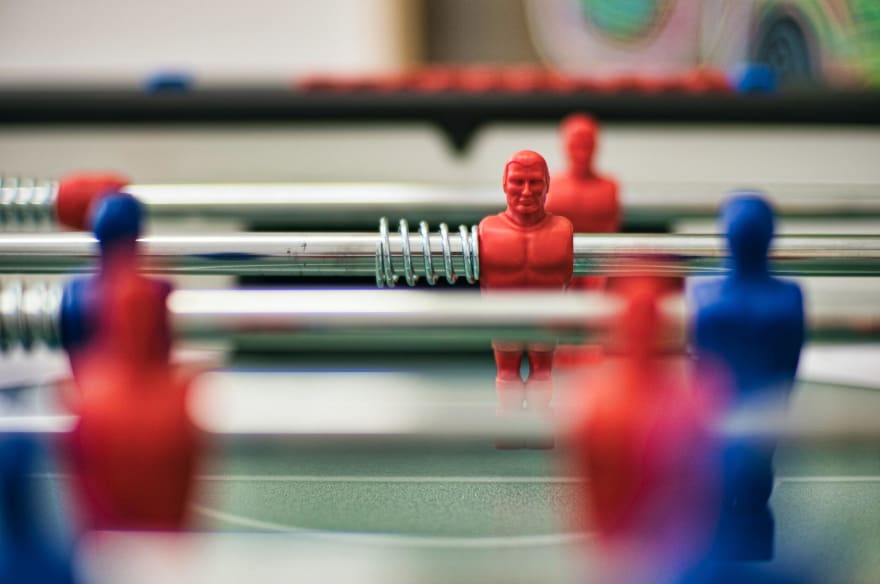 What makes a foosball game great? The core mechanic of my game will definitely be great physics and controls. Foosball is a really fast skill based game. It should be easy to catch up but hard to master. Also it's a competitive game so multiplayer mode is essential. On the other hand you will also need a way to play solo to train your skills so there is also a need in creating an Enemy AI.

The basic game play should be straight forward: create the basic environment, add the figures, attach controls and physics and create a scoring system. That's it.

How can I grow this game? So you might say a foosball game is boring, but I doubt it. To extend the basic gameplay I could add an Enemy AI, maybe even using machine learning. I can add multiplayer gameplay, a ranking system and so much more. The controls are not that difficult so I could even imagine publishing this game cross platform.

I know good projects need planning and a great concept, prototypes and market research. I don't care. I don't know if there are any great games like this already, I won't do any research as this will probably just lead to a point where I loose motivation. I focus on my game and I will add features and ideas step by step, it just needs to make fun and as long as I learn from it this project was a success.

That being said, I will see you on the next episode where I will setup the basic environment.

30+ Free eBooks for all developers