We are closing down to the end of the year, 6 months into the approval of ES2020 specifications - and likely at least 6 months away from ES2021.

Before discussing rumors about next year's release, let's recap what was introduced in ES11, aka ES2020.

You can check how each feature is supported here:

It's used to provide a default value in place of null and undefined (only).
Fixes the abuse of ||, which defaults on any falsy!

It's well supported already in browsers and NodeJs (from version 14).

The assignment version of the ?? operator is also introduced and supported.

x ??= y, however, only assigns a new value to x if x is nullish (null or undefined).

As you can see, it's particularly useful for objects, when you aren't sure if a property has been defined already and you don't want to risk overwriting it (but it can also be used with variables, like car ||= {};).

Allows access to nested object properties without worrying if the properties exist or not.

Did you know that it can also be used for function calls?
Like this:

The coolest part is, this works so nicely together with the nullish coalescing operator, providing defaults whenever the property chain doesn't exist!

Optional chaining is supported in modern browsers and NodeJs (starting with version 14).

A single global object valid and consistent across all JS platforms.

Why is it important? Before ES2020, it was madness when you had to write cross-platform JavaScript referencing the global object.

You had to use:

This feature is already supported in browsers and, of course, in NodeJs: let's double check... 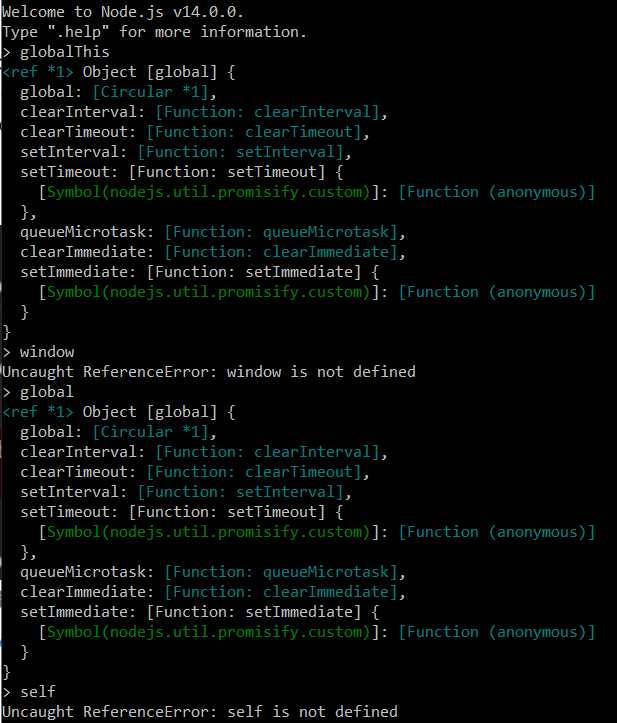 The matchAll method for strings allows you to iterate through all matched groups of a regular expression.

With respect to String#match it allows access to the capture groups, which is particularly convenient to extract info from matched strings! For instance, for an email, you could more easily get username and domain.

Before matchAll, you still could get the same result, but you would have needed to run a loop where you called RegExp.exec

This new method takes an array of Promises and resolves once all of them are settled, one way or another (either resolved or rejected).

You can hence run a group of promises in parallel, but get a single "exit point" when all of them are completed - in practice allSettled created a new promise that is fulfilled when all of the original promises are either fulfilled or rejected.

Suppose you have a function that returns a Promise, something like fetch, which makes a http call.

We can use it to create an example where we have an array with 2 or more promises, and implement an action that will be performed only when all of these promises are settled:

(Obviously the array passed to allSettled can also have promises with a completely different nature and origin, and that can take very different time to settle).

NodeJs supports this method since version 12.9, while you can check out support in browsers here.

Method Promise.all was already defined in ECMAScript specification, with a similar behavior and just a small, yet significant, difference: it will reject as soon as any of the promises passed is rejected.

Now the limit is your RAM! 😁

Well, at least in theory, since each JS engine needs to put a limit, while implementing it, to the maximum size a BigInt can take - for instance, for V8, it's apparently around 16K (😱) bytes (which is still a lot!).

As you might have noticed, BigInts have a peculiarity, there is an 'n' appended at the end of the number's digits; when you declare a BigInt, to distinguish it from a regular int you also have to add that trailing 'n'. You can highlight the difference by checking the type returned with typeof.

As you can see in the my first example, it's also possible to convert an existing int value or variable:

Be careful, though, because the value to convert must be an integer, you can't pass a floating point to BigInt constructor:

For the same reason, you cannot mix BigInts and numbers in expressions: while it's kind of obvious for floating points, there is no automatic conversion for integers either:

How is it supported, you might ask: NodeJs supports them since version 10.4.0, check out here for browsers.

Dynamic import in JavaScript allows you to dynamically import JavaScript modules (or more in general, JavaScript files as modules) in your application. Before ES2020, you could do dynamic import through bundlers; now, this is supported natively.

If you run this code snippet in node's console, half of the time it will print undefined, and half of the time the result of importing your module. You can leverage this to conditionally load one library or another (which, of course, only makes sense if their public interfaces are compatible, i.e. they expose the same methods... or if you find the right workaround).

Check out which browsers support it here.

We only have one last minor feature left to discuss for ES2020, the import.meta object.

This new property exposes context-specific metadata for a given JavaScript module. These data contain information about the module, specifically, at the moment, the module's URL.

How is it supported? NodeJs supported it since version 10.4, and for what concerns browsers... check it out here.