To better understand TST, it's important to look at some concrete implementations - in particular, I chose to use Java in this series.

With recursive structures, like trees and lists, I usually define a class for the container, what will be shared with the clients and implement the public interface of the data structure, and a private class for the list/tree nodes.

The Tst class is just a wrapper for the root of the tree, and all methods are just forwarded to their equivalents for the single nodes.

Of course, in Java you might also want to define an interface that sets in stone the behavior of the container, if you have another concrete class that can interchangeably perform the same operations (in this case we do, because we can implement a Trie class that has the exact same behavior), or in general if you want to decouple the abstract API from the concrete implementation.

The TstNode class is much more interesting than the tree wrapper, because it contains all the logic.

It needs to have fields for the three children of a node, and for the character that each node holds.
I t also needs a way to mark nodes that stores a key: in this version of trie/tst, the containers are just sets, holding the strings stored in them, so I used a boolean flag; however, we can easily implement these trees as dictionaries (which will thenn associate a value to each key stored) by replacing the storesKey flag with a generic field for a value, for instance:

You can also see the implementation of the constructor for the dictionary version above. Obviously value could be any type inheriting from Object.

Constructing a new node to store a key-value pair is easy: we need to create a middle-link chain (which resembles a linked list, at this point!), so we take the first character in the string, store it in the currently-being-created node, and then (unless is was also the last character) create a sub-tree (or better, a sub-chain of nodes, linked through middle-links), that will be stored as the middle-child of current node.

Notice that value will be stored only in the very last node of the chain.

Once we have created our empty TST, we need a method to fill it with key/value pairs. This is probably the one method with which we need to be more careful when we write the TST wrapper, because we can deal with an empty root, and in that case we also assign it.

The core of the algorithm, however, still lies in the TstNode class.
In the listings above and below I omitted some of the checks on the arguments just for the sake of space: we want to make sure that the key is not null and not empty, and that the value is not null. We can perform those checks once per client call in Tst::add.

The figure below shows the results of adding words in the tongue-twister "she sells sea shells on the sea shore" to an empty TST. All words are added in the order they appear in the sentence, but we don't add duplicates ("sea" appears twice 😉). 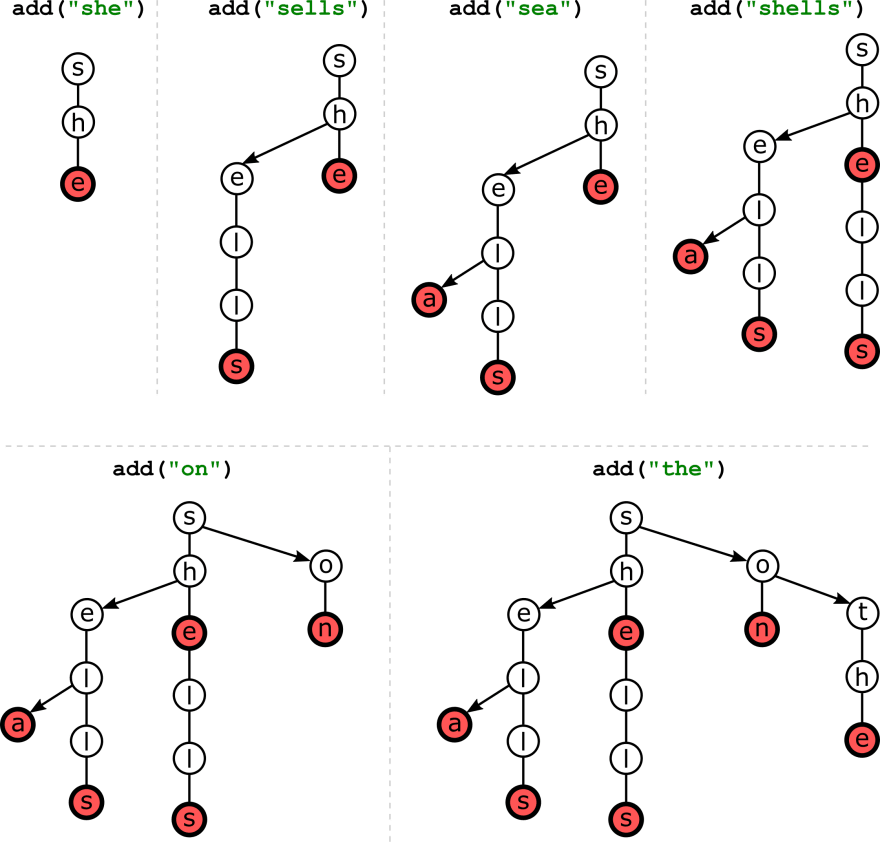 Since we start with an empty tree (i.e. Tst::root is null), for the first word, "she", the method just creates a middle-link chain, a list of nodes holding those three characters. As we progress, more and more branches are created, each at the end if the common prefix of an existing word and the newly inserted one.

Let's pause before adding the last word in the sentence, "shore", and review how the add methods work: then we can use this word to detail a step-by-step example.

The first and most important thing that the method needs to check is (assuming key is not empty) how the first character in the key compares to the character stored in the current node.

Above we also declare the storesKey method, that will be useful to abstract checking if a node is marked as "key node", regardless of the implementation.

As promised, here it is an example of the method in action, with a call to add("shore") illustrating a few of the cases that are highlighted in the code. 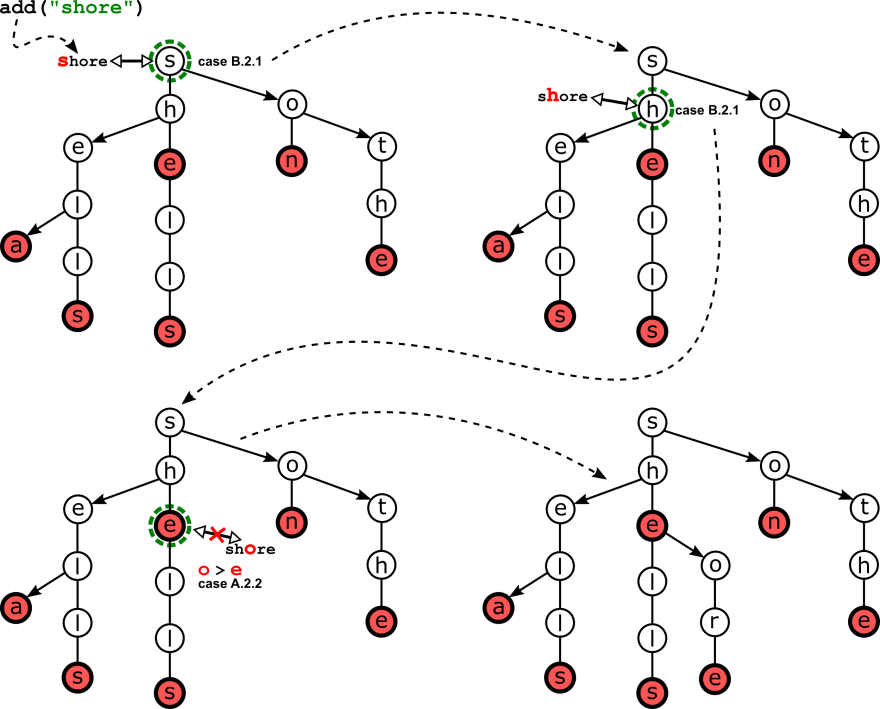 As we have already seen, search works similarly to binary search trees: for each character c in our search string, we first need to find out if, in current sub-tree, there is a node that contains c and is reachable only through left/right links (we can only follow middle-links after a match!).

So, without losing generality, we can restrict to the case where we search for the first character in the string starting from the tree's root. Both strings and TSTs are recursive structures: each node in a TST is the root of a subtree, and a TST is either an empty tree (base case) or a node with left, middle and right - possibly empty - sub-trees).

The following figure illustrates some of the cases above on an example trie. 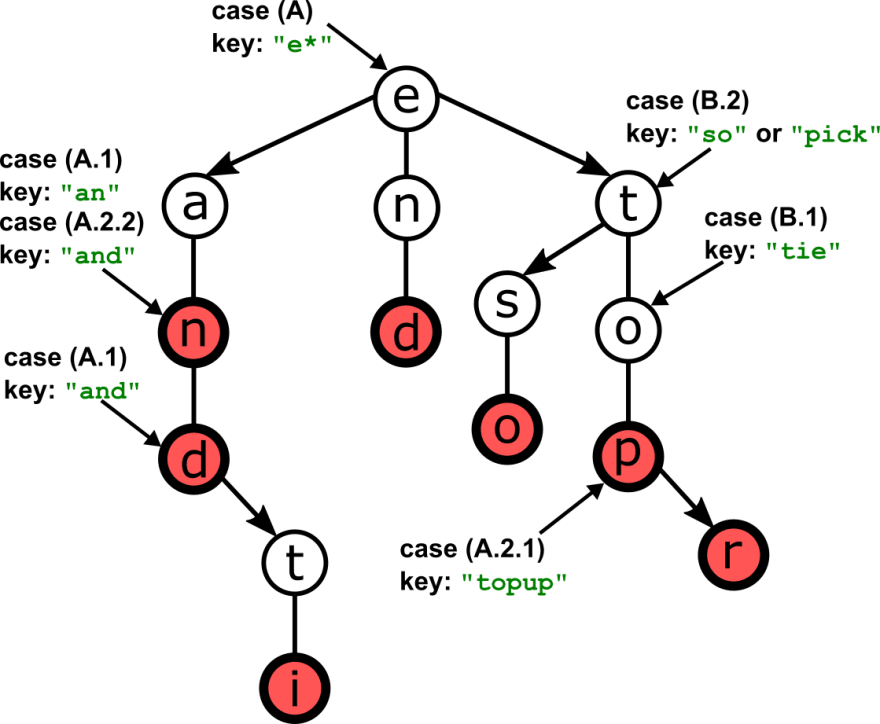 Let's put this into some Java code:

Now, in practice we would like to avoid all those calls to String::substring, because each of them needs to create a new string, and traversing a large tree this gets really expensive.

The good news is that we can easily find a workaround by just passing around the index of the next character to check. It's not as elegant, and we'll need to define a private method to keep the public API clean, but the efficiency boost we get is really worth it.

The next base operation we would like to perform on a container is... removing elements.
Surprise surprise, this method follows the same structure as the other two: comparing the first character in the key passed, and then choosing the right branch to traverse depending on the result.

If it wasn't for a caveat, we could have implemented remove almost by cutting and pasting search.
Where is the catch? Well, if you think about it, what's always the catch, in Java but also in all other programming languages, when you delete something from a collection?

If we are not careful, of course, we won't free the space previously used.

You can see from the figure below that, for such trees like TSTs, there are cases where we can't free any space, because we are deleting a key stored in an internal node. But whenever we delete a key from a leaf, we can delete that node, and all its ancestors that both don't store any key/value, and have no siblings. 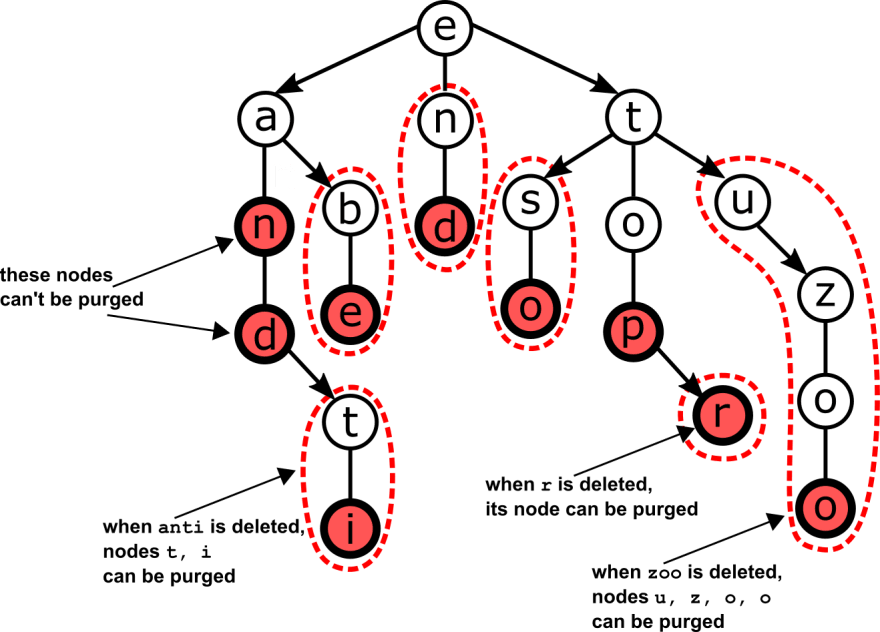 The remove method is still conceptually easier than binary search tree's or, even worse, treaps, because we don't have to perform any rotation nor replace the deleted node with the minimum or maximum of its subtree.

We simply check, while backtracking, that we can remove the link we had traversed and, if so, if current node becomes itself eligible for being purged; the condition to meet is simple: a node can be purged when it's a leaf and it doesn't store a key.

Notice that, the way this method is implemented here, it will never purge the root of the tree. This won't cause problems, but if you'd like to go the extra mile, you'll need to check, in Tst::remove, if after the call to root.remove returns the AtomicBoolean flag purge is set to true: if that's the case, you can set root = null.

Performing this purging is not, however, mandatory: if we know that the rate between add and remove operations is highly skewed towards insertions (and possibly deleted keys get periodically re-inserted), or even better if we have a high ratio of reads-to-writes, we can decide it's not worth to get into the trouble of purging nodes.

Why would you not free-up deleted nodes? First and foremost, it allows you to write a shorter, cleaner and more efficient method: check out the difference in the following snippet, where we called this variant removeNGC as in "no garbage collection".

Moreover, the point is that if you expect the deleted keys to be added again shortly after, then clearing up those nodes and re-allocating them becomes a huge waste of resources.
So, how do you know which version you should implement? There is no answer but: study the context and requirements, and run some profiling - let the data suggest you what to do.

If you read it this far, you got an idea of how the core methods for TSTs work.
It's time to take a break to process all these new information, but stay tuned, I'll go over prefix search and how to use it for cool stuff like autocomplete or spell check in the next posts.

The Principles I Followed While Building Java Microservice