What is a rollout?
A rollout is the process of
gradually deploying or upgrading your application containers.

What happens in a deployment?

When you first create a deployment, it triggers a rollout. A new rollout creates a new Deployment revision. Let’s call it revision 1.

In the future when the application is upgraded – meaning when the container version is updated to a new one – a new rollout is triggered and a new deployment revision is created named Revision 2.

This helps us keep track of the
changes made to our deployment and enables us to rollback to a previous version of deployment if necessary. 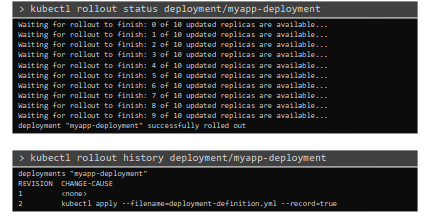 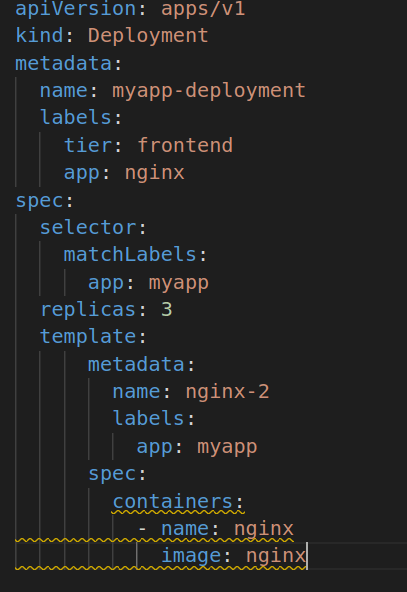 here we have just changed the kind to Deployment. Other than this, most of the things are same as replicaset.
We have given the file name as deployment.yaml.

It shows we have 1 deployment and 3 out of 3 ready pods.
check the pods 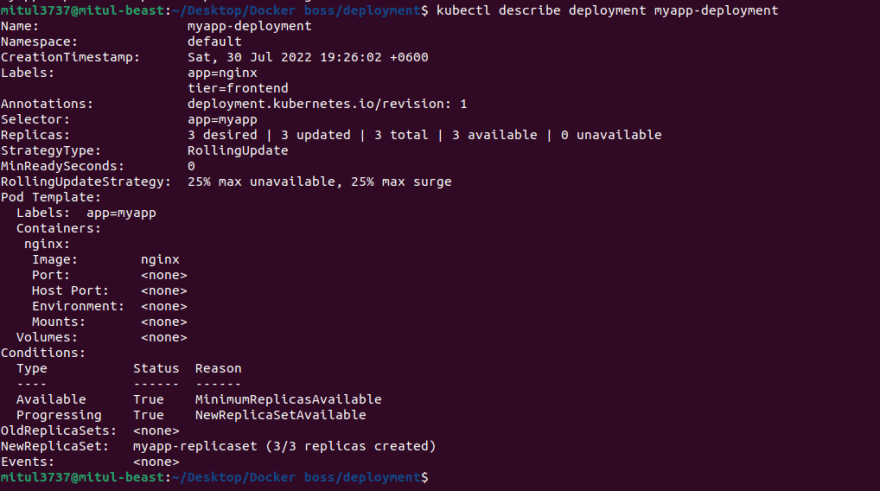 Now use this command

Other than the service, all of the things are related to the deployment

Meaning first, destroy the 5 running instances and then deploy 5 new instances of the new application version. The problem with this as you can imagine,
is that during the period after the older versions are down and before any newer version is up, the application is down and inaccessible to users.

This strategy is known as the Recreate strategy, and thankfully this is NOT the default deployment strategy

Note: if you do not specify a strategy while creating the deployment, it will assume it to be Rolling Update. In other words, RollingUpdate is the default Deployment Strategy.

Lets do it practically: 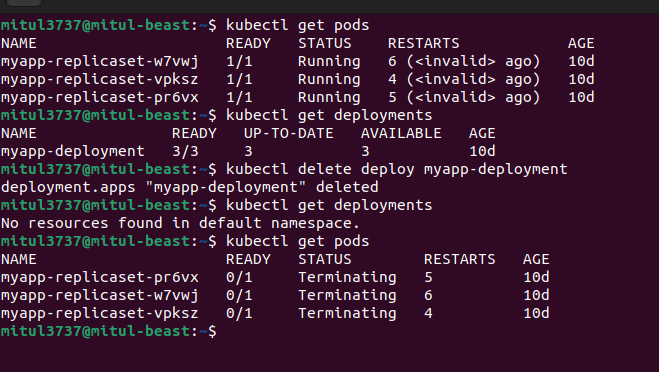 Lets update our replicas to 6 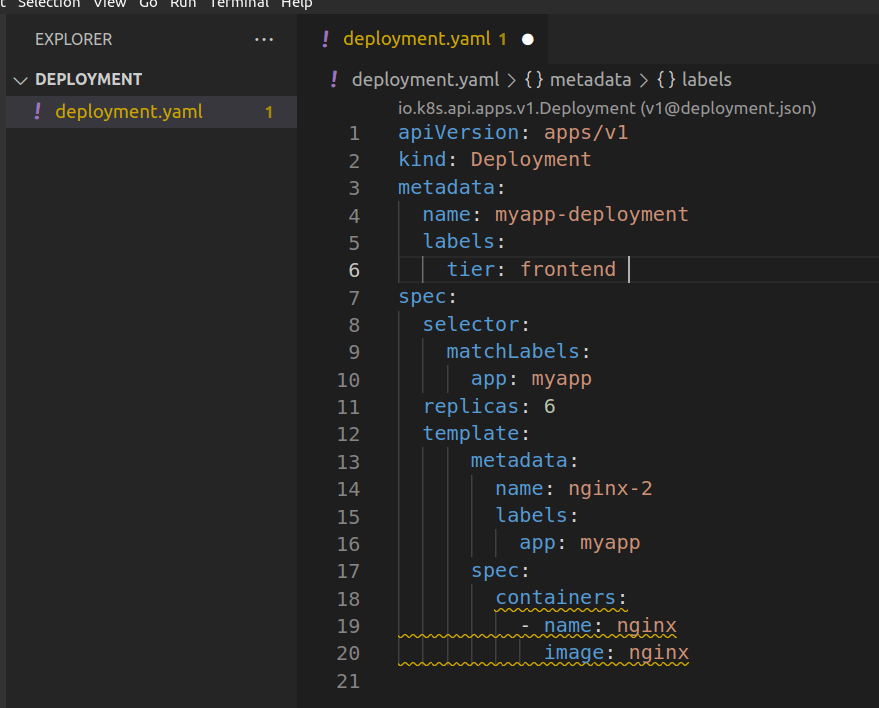 You can now check the status of deployment by watching the 6replcas (pods) getting created live :

Lets use the rollout status command to see status:

Did you realize what happened?
I guess no.Let's delete the deployment and create it fast . Then check the rollout status.

Lets check the history of the deployment

You can see that, we have just 1 revision. You can seethe Cause change None as we did not set anything to record while deployment.

Lets delete the deployment and set this time.

Lets create the deployment with --record command to record the Cause of change this time.

You can see the cause of change.

As we have used the --record command, it has recorded the command "kubectl create --filename=deployment.yaml --record=true"
You can check the deployment information properly: 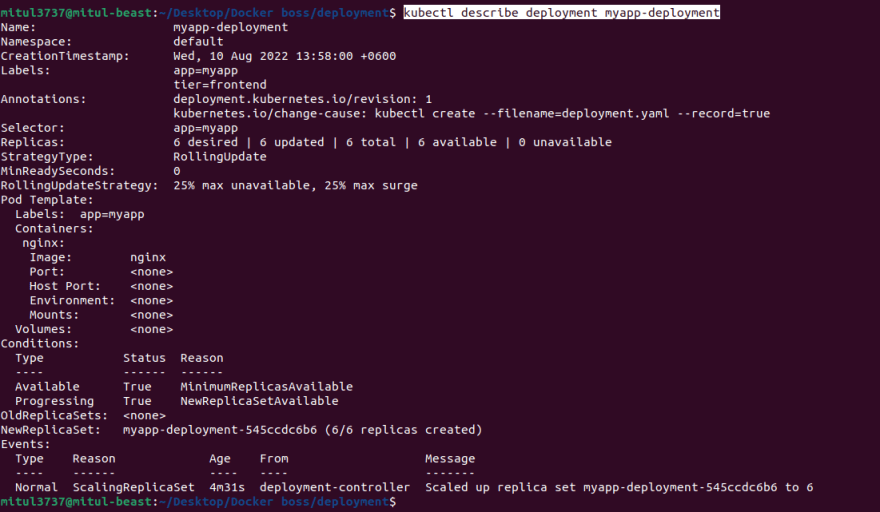 Lets change the image of the replicas (pods) :

we are using --record to record whatever we are doing... 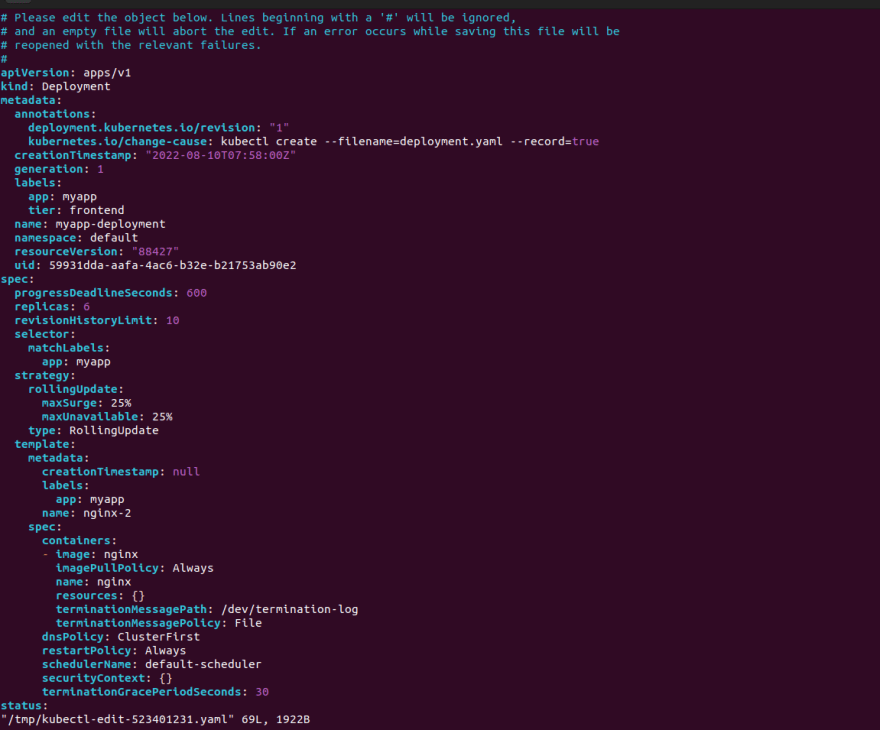 first press "i" to get into insert mode and then change the image to nginx:1.22 which is a stable version and older one. 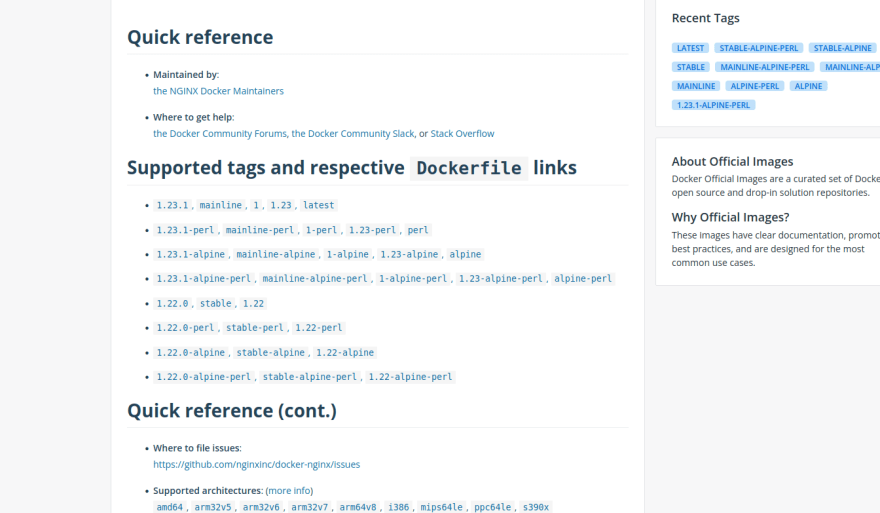 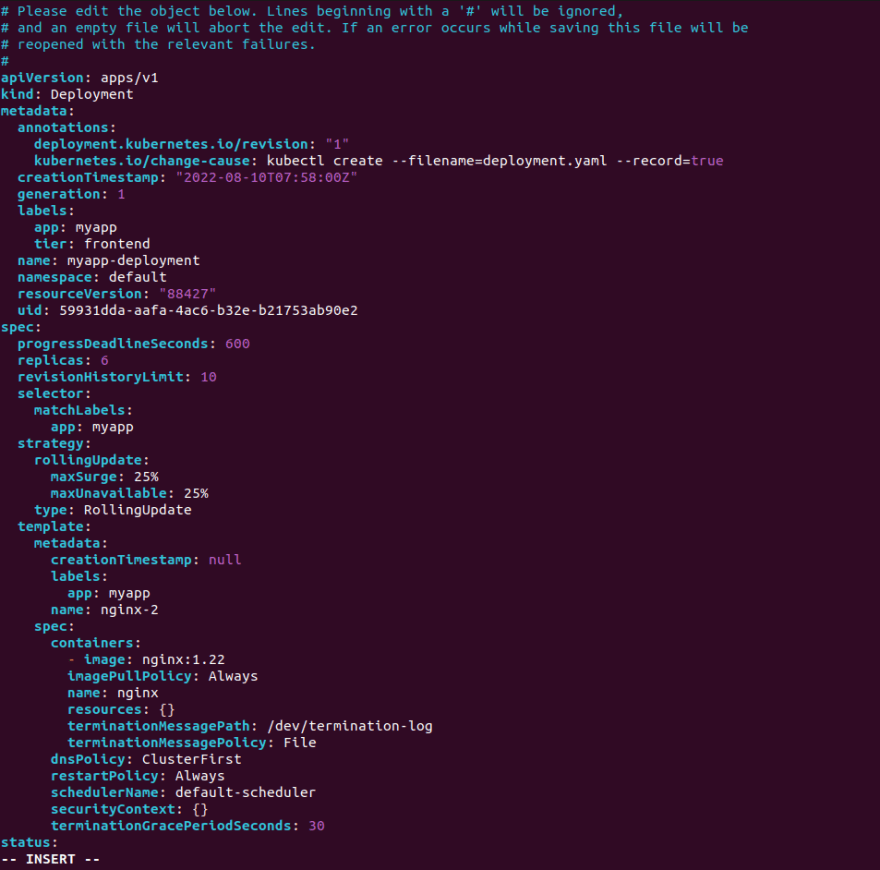 Once we have updated the image, you can press "Esc" then ":wq!" to exit

Now the old pods (Which had nginx image) are terminated and new pods are created using image nginx:1.22. 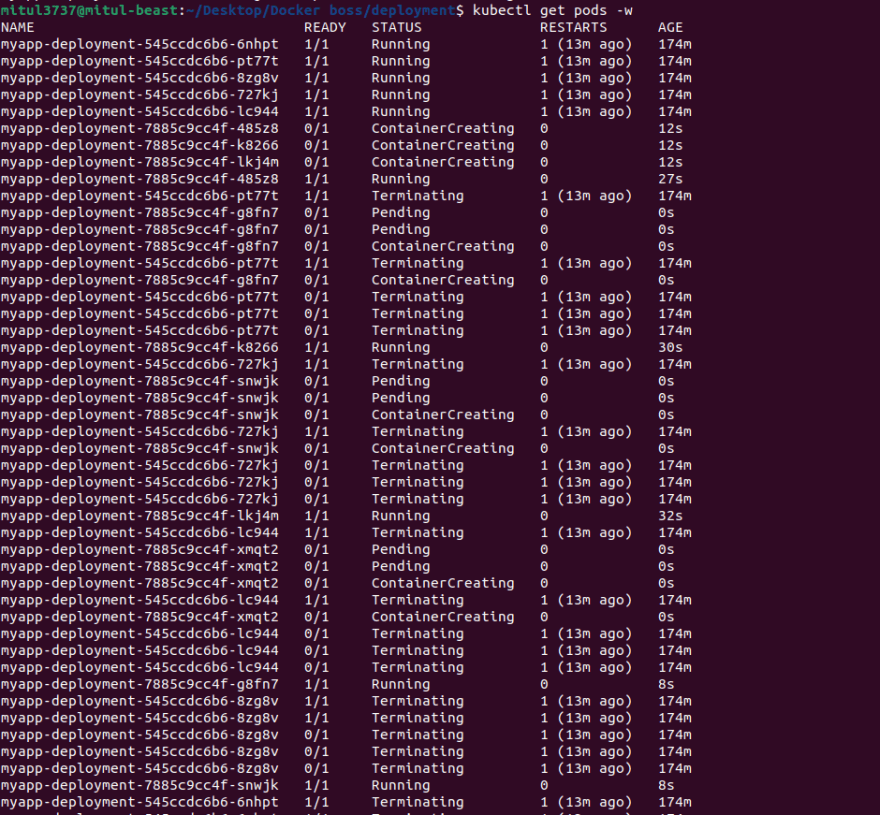 If you type this command within a very short time,

Now check the pods or replicas;

They are completely new made of ngnix:1.22 image

If you check the description of the deployment now, you can see something like this 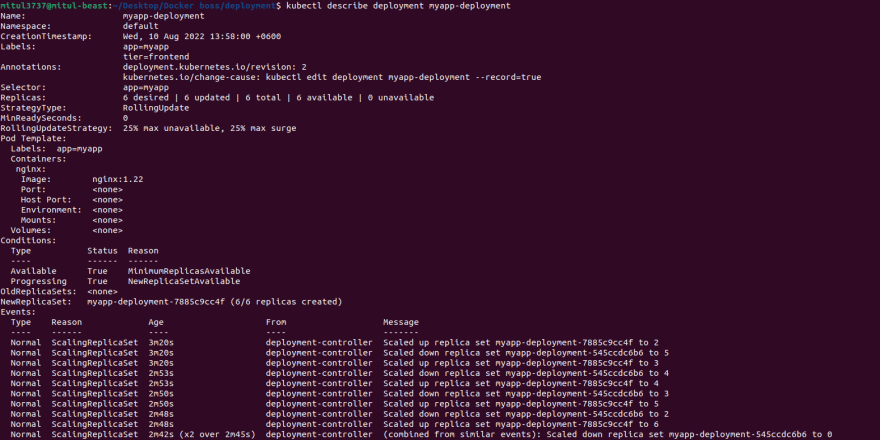 You can see the image has been changed to nginx:1.22 and events . Also it is revision 2 now.

Lets change the image to nginx:1.22-perl again. You may use

SO, in this case

Remember for this yaml file , we did set container name as nginx and image was set to nginx:1.22 which we are changing to nginx:1.22-perl

You can now check the rollout status

You can see the old replicas to be terminated.

Now, you may check the history of rollouts:

There are totally 3 revisions. for the 1st time, when we created the deployment, 1 rollout happened and 1 version was created .

Now, assume that your boss told you that the revision 3 was a bad decision. You should have been in revision 2, then what should you do? You can undo changes . Use this command:

This will undo revision 3 and take you back . This will create revision 4.
Thus new pods will be created which will have image nginx:1.22

Now check out he description of the deployment and you can see the image nginx:1.22 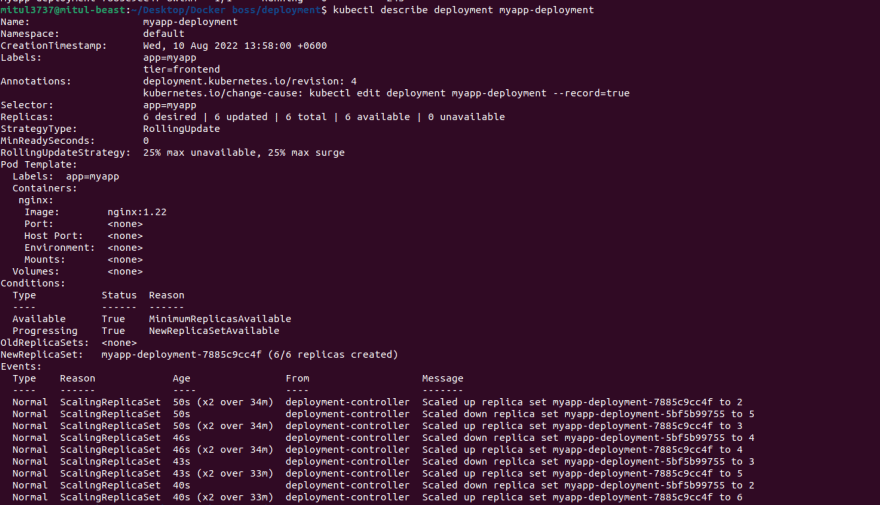 Hey! Did you notice that we were just applying RollingUpdate strategy by now?

You will find a section under spec defining strategy 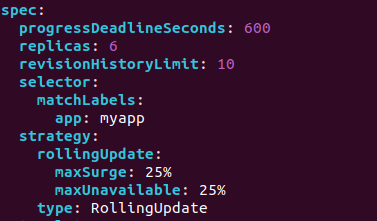 Why I always favor Serverless over Kubernetes

Once unpublished, this post will become invisible to the public and only accessible to Shahriyar Al Mustakim Mitul.