This demo shows multiple parallel coroutines on the main thread.

Slow is smooth and smooth is fast

We all know that user reported performance is massively impacted by our perception of speed. So if a smooth animation suddenly glitches it’s important. If a user decides they clicked the wrong button, they’d probably like the opportunity to abort or change their choice without waiting seconds for results that they no longer want. These are all about user experience and performance perception. In fact the speed at which processing happens is less important than the perception of smoothness. We could blow another 500ms doing something so long as the interface is slick and responsive and the user would think that the app was faster than one that completed quicker but was as janky as an old jallopy.

We often write code that has to do some data processing on the front end, especially in SPA apps. If we find ourselves sorting or processing lots of data then it’s very easy to cause glitches and significant delays. They can be a nightmare to debug and happen differently depending on the hardware the user has.

With Worker threads we can offload a bunch of processing to another thread and it will not impact the performance of the main thread. Sounds perfect, except it isn’t. Because of the heavy sandboxing of the Javascript environment using another thread only really works well if we have small inputs (small data, urls, other parameters) and reasonably small output. Because all of the data going to and coming back from another thread is going to be serialized - blocking the main thread while that happens (unless you are using binary arrays that can be transferred).

If threading works for your application then this article isn’t going to be that much use for you. This article describes a technique that shares the main thread, so it isn’t driving home multi-cpu advantages but it is providing for a seamless user experience by utilising every ounce of the main thread without blocking high priority updates.

Ok so lets dive into how you can process vast amounts of data that takes seconds to execute without interrupting the main thread animations etc.

It boils down to coroutines.

You are most likely already aware of coroutines in one form or another. A coroutine is basically a thread of programming logic that is working its way to completion at the same time as other things are doing the same.

A thread is a kind of coroutine, but normally we differentiate them. A coroutine is therefore another logical processing state machine in your main thread. We see them all the time as Promise execution chains and async functions with await.

Anyone familiar with the Unity game engine will know it uses Coroutines in many cases to create fire and forget logic that updates every game frame to control a bullet, an AI or whatever. We will see how we can use it here in a very similar way.

We can have multiple promises waiting the next step of operation at any time and they will resume when their entrance criteria are met - execute in a blocking fashion until they either return or wait for the next step.

Typically those operations are awaiting the result of something on another process, server or thread. You may (like me) have had occasion to try to break up long running processes in an async function with:

The main loop has a list of things to do, the above line queues the resumption of this routine after the next time the loop executes. 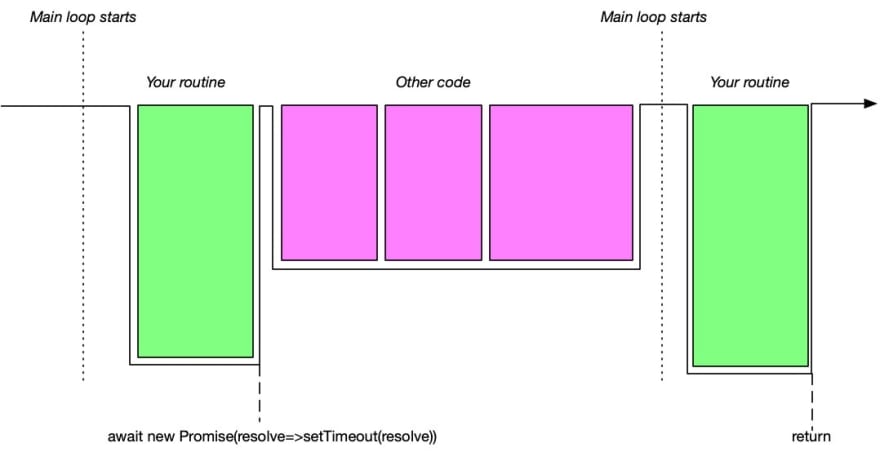 Executing this code will result in your async function resuming the next time the main loop has finished its other available work. Giving the system time to do something else, like animate or resume another async function.

Ok so the above is a rough way to allow other processes to run. It’s a blunt instrument, we are giving up any more time this main loop and starting again next time. Do that inside the middle of a tight for loop and your code will take forever to run.

Takes 16 seconds to run to completion. We can’t use this method easily and it gets worse:

Might take 1 second to run, and so you’d get a glitch.

If we want this to work we need another way of writing coroutines that:

So we want to do something like an await but we want to carry on right now if we still have enough time before we’d glitch animation.

There is something like await we can use for this, in fact before await many of us used it to make Promise based code easier to read. That’s generator functions.

Most demos of generator functions show you a for next loop over Fibonacci numbers or something equally useful. But they are very powerful constructs. A generator function is syntactic sugar over the ability to make an iterator. A iterator is a class that has a next() function that will run some code and return the next available value. Hence the Fibonacci examples.

So if we write a generator function and call it, it gives us something that we can get the next value from any time we like.

So now we need to stop worrying about the value being returned, and just use the side effect that the code is being run whenever we like. (Although in my implementation yielding true will abandon more work on the current frame to allow control when Garbage Collection might happen)

We can run the next step of the code, see how much time we’ve used, if not too much then we can run another step. If we’ve used enough, we can defer to the next loop of the main thread.

How much time is left?

Browsers have a call requestIdleCallback() that will call us when the main thread is idle and provide a parameter that can be used to enquire as to how much time is left before the next frame. Nice.

We can build a generator, call it repeatedly until there isn’t enough time left for any more, then just request another run next time the main thread is free.

This is polyfilled for unsupported browsers - so it will work all the way back down the chain.

That’s it. This version allows returning true to abandon the current frame and also provides the returned promise with a terminate(result) method that can be used to stop early in case of re-entrancy.

When you call it, it returns a Promise that will resolve with the final return of the generator function. It will run in the idle time of the main thread, and yep, you can run more than one.

Ok so having built that we now need versions of the common “heavy” operations that we can use with a few yields in there.

Douglas Crockford’s JSON stringify is fine, although it does massive work on strings that need splitting up, so that got rewritten to be stringify and stringifyAsync in js-coroutines.

Parsing in Crockford’s code uses eval() - not going to help as we can’t split that up so I used and optimised someone’s AST parser for JSON and stuck in some generators. Seems performant enough - given we have 60 fps animations.

A few obvious array operations are easy to implement with generators:

You can see in here we are using yield* that actually doesn’t yield it lets the whole statemachine hand off to a sub function which itself can yield back out to our .next(). So yielding in these functions requires that the reduce function does it. To make that easy I wrote a yielding(fn) call that makes a generator that yields every few iterations out of a standard function. If that sounds hard, it isn’t:

The function returns a generator function that passes through its parameters and yields every frequency loops.

So being able to write your own generators is really nice, but much of the time we probably just want to do a big JSON parse or a sort. Bothering with generator syntax for that - when you aren’t working out how to split up your own deep processing functions - well it’s a bit of a chore.

In comes wrapAsPromise(generator) which takes away the effort, wrapping a generator function in all the necessary boiler plate to initialise it and wait for the result. It returns a function that runs the process.

Which means we can then just define an async JSON function (as I do in the library) like this:

And we get async JSON in any async routine by just calling:

The Other Kind Of Coroutine

Imperatively controlling animation is nice. We can write a for next loop and just tell something where to go each frame. High priority coroutines can do this with generators just fine:

Here the update function uses a requestAnimationFrame() to run, and yield does wait for the next frame.

We can't account for GC hitting a frame here or there. You can try by writing routines that yield true to allow more time for it.

It turns out it’s really not hard to completely split up work across multiple frames and maintain 60fps. I’ve got to thank Paolo and his excellent article where he messes with React Fiber to enable reparenting React components for giving me the inspiration to read some of his references - where suddenly seeing the requestIdleCallback() gave me a eureka moment.

Frankly after years of struggling I can’t quite believe I can now write:

And not risk a massive glitch.

Other great NPM packages included Timsort (for the sorting) and (yastjson) as the starting point for a fast JSON parser that works as a coroutine.

The project home page has many more details and examples. The library is available on GitHub and via npm:

Once suspended, miketalbot will not be able to comment or publish posts until their suspension is removed.

Once unsuspended, miketalbot will be able to comment and publish posts again.

Once unpublished, all posts by miketalbot will become hidden and only accessible to themselves.

If miketalbot is not suspended, they can still re-publish their posts from their dashboard.