As I was wrapping my head around everything I had to review about building web user interfaces in 2021, I came across this "I Design, You Build" challenge here on DEV: 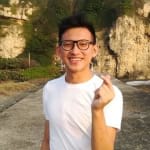 Joy sparked. Challenge accepted! With a twist — I'll use this same design to build the website multiple times with all the different technologies that I want to explore:

In the intro to this blog series, I imagined I would only write one article about UI comparing all these technologies. But after finishing just the HTML & CSS part, it's obvious they each need their own blog. I will preface them all with "UI -" like I've done for this first one.

Except no. We now have very good browser support for Flex and Grid layouts — it would be a shame not to use them. Wait how do you use them for building full responsive pages again? Is mobile-first still the thing to do by the way? To soothe the sudden existential dread caused by the influx of these questions, I read this from start to finish:

It works. I mean, the best thing would've been a recording of this talk by the author, but such a recording doesn't seem to exist on the internet yet, so the article will have to do.

Here's a video I watched to review what I know about CSS Grid:

Everyone's learning style is different, but for me, I remember I put that video at 1.5x playback speed, and it captured my attention long enough to watch to the end. After that, when you run into specific problems while building something with grid (as you will), gridbyexample.com will have your answers.

As for flexbox, I don't remember all the different places I've learned it from, but if this doesn't make sense to you, it probably means you should review one of the many good resources on flexbox out there: 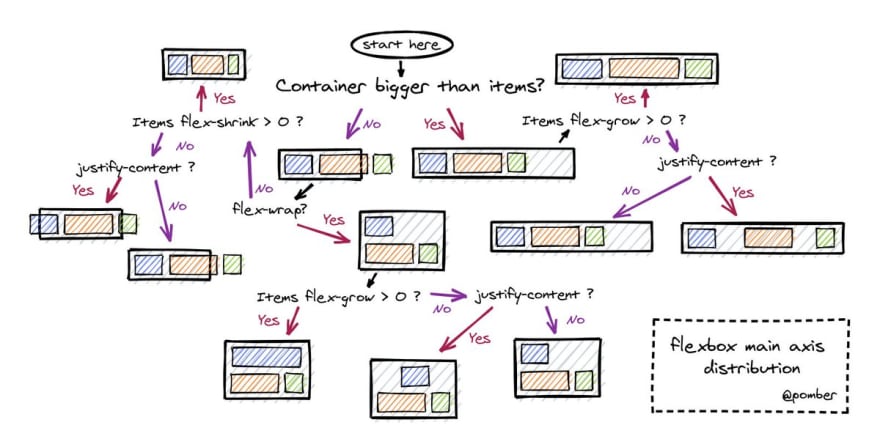 While we're on the prerequisites part of this blog, do you know what else is required reading? Accessibility. Yeah, I know you plan on learning about accessibility... someday. And I can't blame you entirely, to be honest — putting the responsibility of making web browsers work correctly with assistive technology entirely on developers, feels akin to fighting climate change with paper straws. Still, there is a grain of truth in both of those outwardly absurd situations: just like the fight against climate change will most probably require some changes in consumer behavior, accessibility in its current form (WAI-ARIA, etc.) is necessary until we have better solutions to the problem of inaccessible technology.

Where do you start? This awesome introduction, right here:

And here's the last piece of reading I'll suggest before we start working on the challenge. This is the most fun to read, though — it's an interactive guide about the basics of CSS animations:

Alright, so with our refreshed knowledge of responsive web design with flex and grid, accessibility, and animations, we are ready to jump right in and:

Here's a first look at the design: 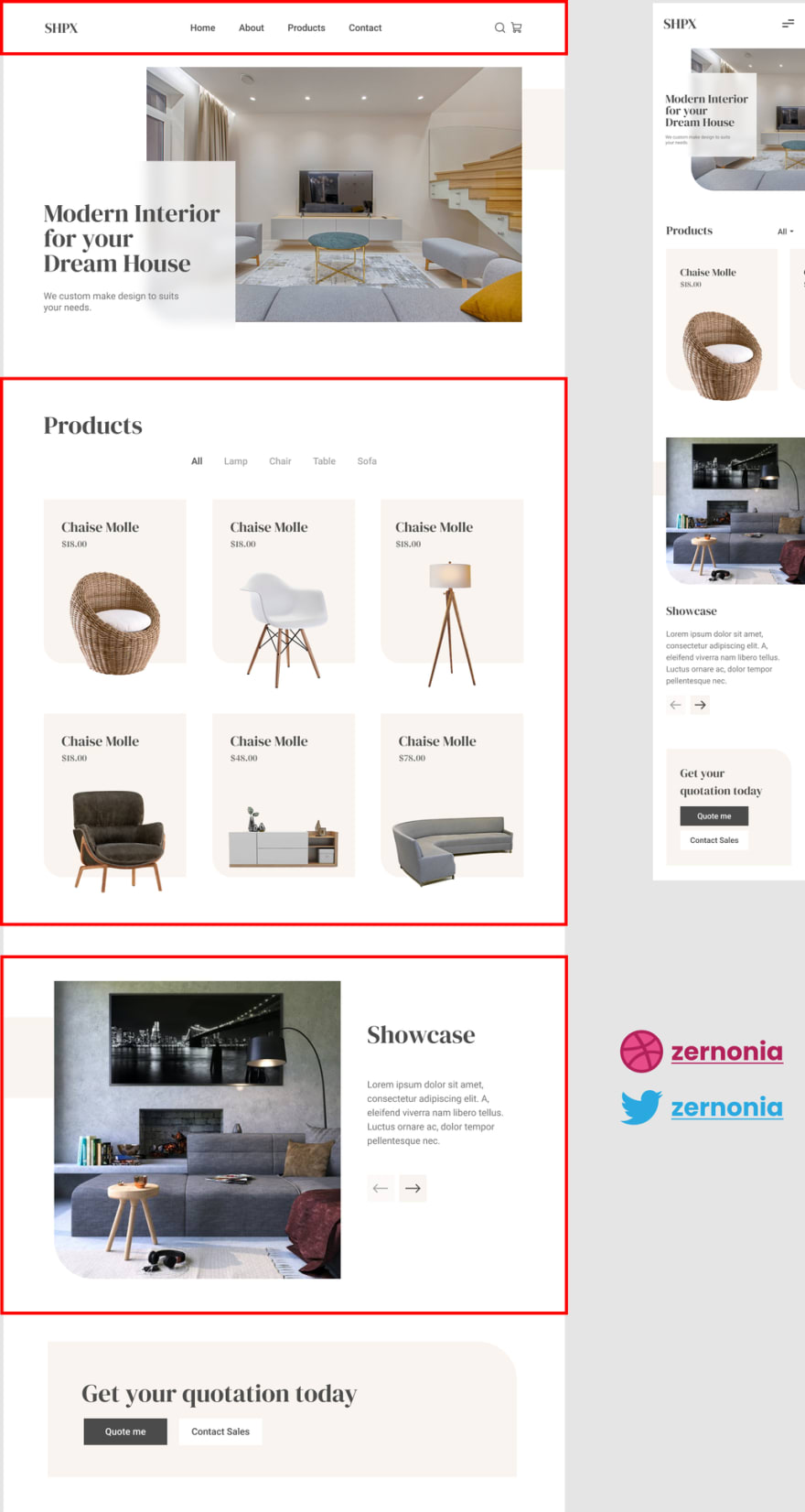 I've highlighted three important components in the desktop design: the top navigation bar, the products listing component which is a grid of items you can filter, and the showcase/slider/carousel.

We'll cover UI component libraries later in this series, but we must take a first look at them now as case studies to copy best practices from. UI components, like the three that we have in our design, are very common patterns, that are implemented again and again in all kinds of websites and apps. It makes sense to get a bit more familiar with how others are doing that.

Ten years ago, that would have meant reading what some distinguished designer had to say about it in his (yes, the distinguished designer was a he) personal blog. Today, a good place to start would be the most popular design systems/component libraries. Of course, you should still read widely, listen to podcasts, and consume all kinds of content you like, but as a culmination (usually — not looking to start any debates here) of current best practices, popular component libraries are a good place to start.

Material Design is the best Google has to say about the subject. Chakra UI is a truly collaborative project built under the watchful eyes of the open-source community. Bootstrap suffers from the plague of having once been uber-popular, but is, in its current fifth version, an invaluable mix of best practices and real-world experience. We'll look at these libraries, and many other sources, to learn about the three components we identified.

I've separated each component into its own git branch, so that you can inspect them in isolation, without getting distracted by unrelated code. The master branch contains all of them put together.

If the others are components one, two, and three, this is like component zero? While writing the base styles for the page, and the two simple sections that I didn't circle in red, we also have to take some things into consideration as they come up, that we haven't covered in the prerequisites section above. It's very easy to fall into deep rabbit holes through each of these topics, though, so I'll keep it super short and give no "further reading" links at all.

Doing art direction and handling different resolutions by hand, for a large website with dynamic content, is practically impossible. You will definitely need to reach for some images service like Cloudinary.

In our proof of concept here, I exported two sizes of big images like the hero image and used srcset and sizes to serve the most appropriate one. I didn't export a separate file for the cropped mobile version but achieved the crop effect with object-fit and object-position.

Probably the most ubiquitous piece of UI in websites. It has always been there in almost all websites, evolving with the time from a dl with links in the first website ever, to uls with padded lis floated left or right for the horizontal look that started in the 90s and continues on today, to the web 2.0 fad of dropdowns on hover, to the proliferation of hamburger menus despite people making the case against them.

From the popular component libraries mentioned above, Material Design's top app bar, even though heavily biased towards apps rather than websites, is still a good high-level overview. The first related link from that page is also a good read to get you to think more in terms of UI/UX rather than solely converting a design into a web page. In terms of implementation, bootstrap's Navbar seems closer to what we're looking for.

Speaking of which, what are we actually looking for in our nav component? We have both desktop and mobile designs so that's good:

Now, I didn't make you read all those articles for nothing, so let's apply our knowledge to fully specify our nav component:

Ah, the carousel — web designers' most hated component. This is probably why you won't find it in most of the popular component libraries (okay bootstrap still has one, but that's probably part of why bootstrap is not so hip anymore). The carousel is not going away anytime soon though. Especially on mobile where swiping is second nature. Airbnb's scrolling features on their home page and app are iconic by now. Swiping on, how do we implement it?

You may not find a carousel component in component libraries, but do you know where you can find one? At the WAI-ARIA Authoring Practices.

I took an even simpler approach, though. Here's the code first:

As I said, I took a simpler approach. Not because I'm a contrarian, but because I found out about CSS Scroll Snap! Oh em gee! Is this real? How can this be real?

You add two CSS properties, and things... just... work? This just doesn't happen on the web. Who allowed this? Didn't they think of the slippery slope?

OK, for real, this is awesome, but let's move on.

With scroll snap, our carousel doesn't have to be a carousel at all. All the "slides" content will be present at all times, just waiting to be scrolled into view. As far as screen readers are concerned, this is normal content on the page (I gave slides a role="group", but even without it, screen readers would do fine reading the content in order).

For keyboard navigation, when the showcase has focus, pressing left or right arrow keys would normally just scroll the content horizontally by a little. Thanks to snap scroll, that little scroll becomes a complete scroll to the previous/next slide. scroll-behavior: smooth; ensures the same happens when you tab through, moving the focus from one slide to another (except for firefox apparently, but that's easy to fix with some JavaScript if you want).

The JavaScript for the buttons becomes trivial too: next/previousElement.scrollIntoView(). The IntersectionObserver keeps track of the current slide to conditionally disable the prev and next buttons as needed.

Have you seen that "drawing spiderman in 10 min, 1 min, 10 seconds challenge" that went viral a while ago?

The 10-second version of our page would just be the products listing component. It's the main function of the site. The reason why visitors are there. I learned to recognize this most basic pattern as soon as I got into web development. I started with WordPress — you had this index.php template to design the page that lists all the blogs/items, and single.php to design the individual view that shows up when the user clicks one of those items. That pattern is everywhere in different variations: youtube, twitter, news sites, your portfolio. See a bunch of things, click one.

Now, because this is so often the main functionality — it is closely tied to the business logic of the website/app — you won't usually find a generic "product listing" component in the component libraries. Instead, you'll find helpful bits intended to aid you while you're building this core feature yourself. For example, you'll find cards in material design, and this nice link overlay in chakra. Bootstrap also has cards, list groups, pagination etc.

And without further ado (lol as if I could drag this out any longer), here's the full challenge demo and code:

I'll try to do this in a bulleted list form too. Here are my observations from building a website with HTML and CSS in late 2021:

Alright then, on the next blog we'll rebuild this in React and some CSS-in-JS library like styled-components. Follow me on twitter. I almost never tweet, but if someone follows me from here, I'll make an exception and tweet about the next article when it comes up.

People disable javascript in their browser? 😱 Give 'em something to cry about!