In this two part article I will show you how to build an app that collects people's opinions about companies and how to turn that into sentiments. Disclaimer: Trade at your own risk!

As for technologies my current go to stack is AWS serverless tech and deployment with the Serverless Framework. This article assumes that you are familiar with both.

Many platforms have APIs that let us collect opinions. The prime example is probably Twitter where everyone screams into the forest. We will start by setting up an app and collecting the raw data.

In order to collect data from Twitter, you have to create a developer app and generate oauth1 keys. You can do all of that through the browser. Store the details in the config.<STAGE>.json file. The value for <STAGE> is either dev or whatever you provided with the --stage parameter. 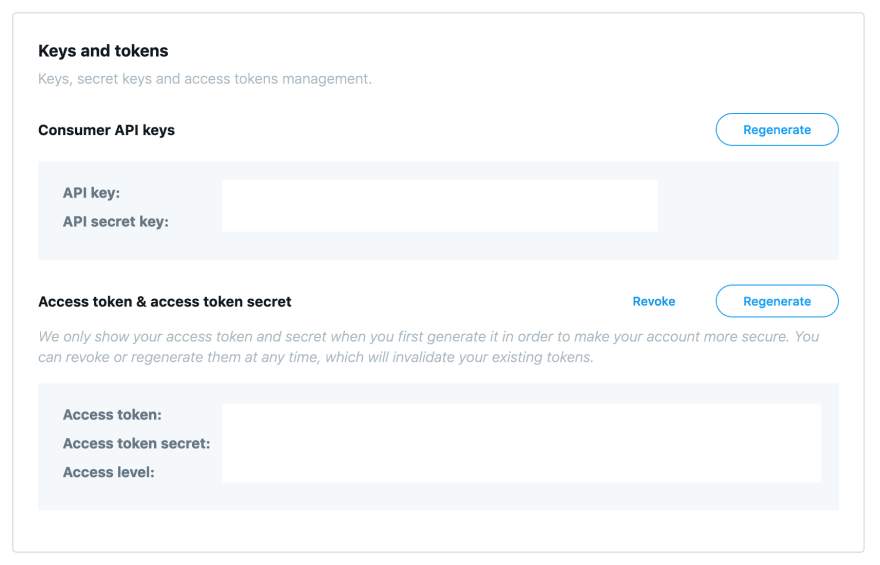 Next we set up a serverless app. With serverless technologies like AWS Lambda we don't need to worry about creating and maintaining serves, and it's also super cheap. You can find the source code on github or learn how to create a serverless app at serverless.com.

Our first function will run in a regular interval. I chose 10 minutes because that was usually enough time for for 10-50 new tweets to appear. Learn more about the scheduling options by visiting the CloudWatch docs.

The function needs to authenticate with Twitter, load new tweets and then store these in our table for later processing.

The first step is pretty simple with Tweepy. In the following snippet we load the oauth1 keys from environment variables and then authenticate. Our script will abort if the authentication fails. You can find the full source code on Github.

As I'm running this on AWS Lambda, search queries are a better fit than the Twitter streaming API. The following search query allows us to define a search term, how many tweets we want to load per query as well as a max_id and since_id for pagination.

To store the data I'm using a DynamoDB table. As this query may return tweets that we already have, we check if a tweet already exists before writing it. We could just overwrite the tweets, but this would leader to higher DynamoDB spending. As a rule of thumb a read costs 1/5th of a write operation.

Before you deploy, make sure to fill in the configuration. The config is documented in the readme.

Finally deploy the app with sls deploy and let the tweet collection begin. Keeping in mind that the schedule only fires every 10 minutes, check the logs for errors if no tweets arrive. The most likely errors are missing AWS permissions or bad Twitter keys. The first new tweet in our table shows that our collector is up and running!

To understand the yearly cost of this stack, we will look at two parts: The Lambda function and the DynamoDB table.

The free tier is likely to cover all of that.

If you exceed the free 25GB per month, then DynamoDB will charge you $0.25 for every additional GB. My table with 1.5m tweets weighs ~270MB.

You can additionally lower the cost by switching to provisioned mode, where DynamoDB offers 25 WCUs and 25 RCUs for free.

Note that CloudWatch will charge you too, should you exceed the free tier.

Collecting data is fairly simple and very cheap. But will it be the same if we monitor 100 companies? Feel free to test that by using the source code on GitHub.

In the part 2 of this article we will use sentiment analysis to understand if a tweet is positive, neutral or negative.

Serverless enthusiast, Opinions are my own

Learn Go with the help of Python