In the previous post we looked closer at the algorithm and connection between Redis and Node. Today, quickly I summarize how the recommendation is made.

A single recommendation is an overlap between item tags and actor tag-event interactions. 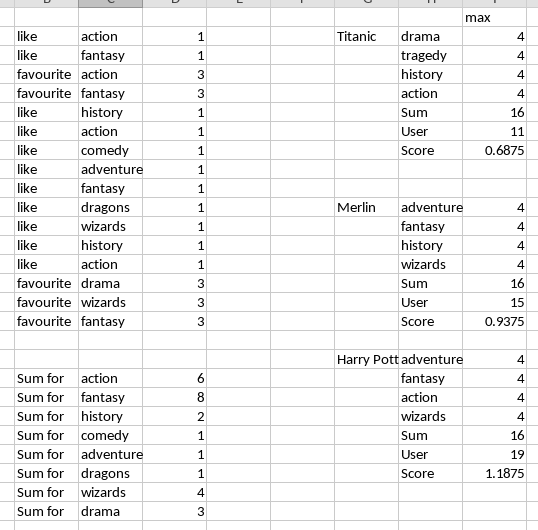 To make sure tags are still relevant, they have an expiration time. So as the interest may change, they expire and will be replaced with new tags. In this approach is also worth to notice the more keywords items have, the more suggestion is precise.

Demo of film recommendations with 10,000 videos

And the source code:

Open source recommendation system based on time-series data and statistical analysis. Written in TypeScript and Node.js using Redis for storage. The recommendation system uses the Jaccard index to calculate the intersection between two sets. One set is represented by the maximum possible sum of tag score and the other set is the score sum of user events per tag. The higher the Jaccard index, the higher the recommendation. It uses numbers to represent sets to increase performance.

How the data is stored:

That was the last post about my Redis Hackathon journey. It was fun to participate and learn more about the technical aspects of Redis. Also, the hackathon allowed me to stay focused and finish another side project! What a wonderful event! ;)

A Blockchain RPC Provider That Won’t Track You