The Dart language is unimaginable without the command-line utility (CLI) of the same name. This is a full-fledged tool that greatly simplifies the life of a developer in terms of its capabilities, far exceeding the built-in capabilities of the Python interpreter.

Among the dart features available are project creation, source code analyzing and formatting, and even publishing packages to pub.dev and more.

Bear in mind that the goal of this cycle is not a complete immersion in Dart from scratch, but a quick acquaintance for those who already know how to develop, in particular, in the Python language.

Python does not have built-in capabilities for automated project creation, everything has to be done manually: create a folder structure, describe dependencies in requirements.txt. Of course, there are third-party applications that make this process easier, such as poetry or Cookiecutter. However, they are third-party and require installation in a system or virtual environment. Dart has this feature built-in.

So, dart create is a CLI utility that can help you to create a project from the specified template.

By default, this is a simple console application like dart-sass. However, this is not all. Using the -t option, you can specify which template to use for creation, it can be:

When run, dart create will first create the project structure and then try to load all required libraries from pub.dev. This behavior can be changed by specifying the --no-pub flag when invoking the command.

Analogue from the world of Python: poetry new project_name

When working with several people on one project, it is very often necessary to use a single style of code design, writing comments, using variable names, etc. In the Python world, we use linters flake8, various formatters (black, yapf, autopep8) and mypy for type checking. How can Dart help meet these challenges?

The utility allows you to perform static analysis of the source code and point out errors and shortcomings.

By default, the call will run a check and indicate errors and warnings, indicating the need to respond to the info level with the --fatal-infos flag.

The behavior of the analyzer can be adjusted using the configuration file or comments in the code.

Using the command, we can style our source code according to the Dart guide.

This command will overwrite the files, formatting them "properly".

To see the changes, specify the --dry-run flag; to apply --apply; there is no default behavior for this command.

Launching a Dart application is extremely simple, just run the following command in the terminal:

If you are inside a package and in the bin directory there is a dart file with the same name as the package name, then the application can be done without specifying the file:

It is also possible to run applications from the packages specified in the dependencies to the current. For example, if your application has a dependency on the package foo, to run a program in this package, just call the command:

Or specify a different program inside the foo package:

You can also specify additional flags, for example, to debug the application:

The dart compile command allows you to compile a Dart program for the target platform. The output you specify with a subcommand can either include the Dart runtime or be a module (also known as a snapshot).

Every program needs testing, this will reduce the number of errors during development and improve the quality of the application. For Python, there is an excellent framework that simplifies the work with tests, writing, and executing them - Pytest. Running tests with it is extremely simple:

The output of the command is quite detailed and makes it easy to understand where and what went wrong when running the tests. Here's what it looks like: 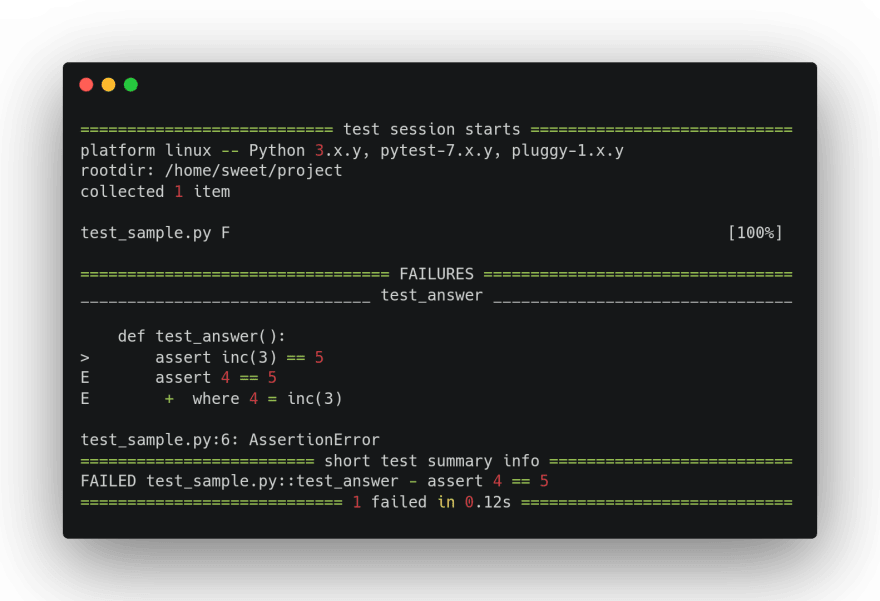 Testing in Dart is done with the dart test command.

Several flags such as --name (-n), --tags (-t), or --exclude-tags (-x) allow you to control which tests will be run. If several flags are specified, then tests that satisfy all conditions at once will be executed.

Python has a built-in pip utility that allows you to easily manage packages, install, upgrade, and remove them. For more control, there are also third-party tools like poetry. Dart also has a tool that makes it easier to work with external dependencies - this is dart doc.

The possibilities of dart pub are much wider than installing and removing packages. With it, you can manage the local package cache, publish packages to pub.dev, etc.

For example, consider installing a package in Python:

This command will install the up-to-date version of the Django package, however, it will not write it as a dependency, which means that on a new installation, you need to learn about this dependency somehow.

The same can be done in Dart like this:

In this case, the package shelf will be added to the project, specified as a dependency in pubspec.yml and loaded into the cache.

An important part of the development of applications and libraries is the documentation of functionality and source code. And for this, Dart has a special utility, which is extremely easy to run: 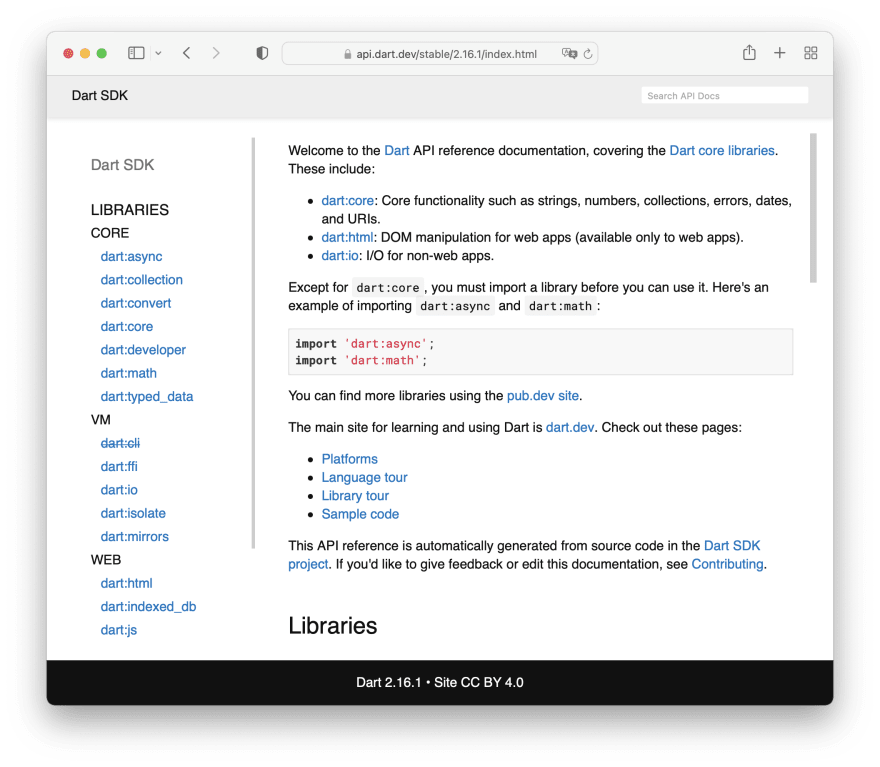 Dart allows you to use comments and markup in your code to describe classes, functions, modules, and other structures. We'll look at these in more detail in a separate article, but for now, we'll mention that Dart handles special document comments. You can read about how to make documentation as effective as possible in the article Effective Dart.

Analogues in Python can be the generator Sphinx or pdoc, their capabilities are far beyond the capabilities of dart doc.

We have reviewed some of the commands available using the dart utility, some of them require a deeper understanding. However, even this cursory glance gives an idea of ​​its capabilities and convenience available "out of the box" for the developer.

Next, we'll start diving into the Dart language and compare it to Python.

Once suspended, meamka will not be able to comment or publish posts until their suspension is removed.

Once unsuspended, meamka will be able to comment and publish posts again.

Once unpublished, all posts by meamka will become hidden and only accessible to themselves.

If meamka is not suspended, they can still re-publish their posts from their dashboard.

Once unpublished, this post will become invisible to the public and only accessible to Andrey M.

Thanks for keeping DEV Community 👩‍💻👨‍💻 safe. Here is what you can do to flag meamka:

Unflagging meamka will restore default visibility to their posts.