A few weeks ago, memoization helped me to fix a performance issue in my Vue.js application. The result looks like a "Vue.js computed property with parameters", although it's not possible!

The problem appeared in this big timeline component.

To make it short:

To position an event on the grid (left, width, top, height/lineHeight), I have to call a function to compute if this event overlaps with another one. This function was called many times and sometimes with the same parameters.

This component used to work nicely on my local environment™️.

But, with more events/day (≃ more squares) and more users (≃ more rows), it was a different story. The component was taking ~4 to ~6 seconds to show up. I added a console.count() and I realized that my function was called +700 times! 🙈

My first call was to use computed(), a cached property (based on their reactive dependencies).Unfortunately, they're not working with parameters. In other words, you cannot do that:

I had to find something else.

Memoization to the rescue!

(If you're already aware of what memoization is, you can directly jump to the next part)

The fibonacci function is a good example of how memoization works because this implementation uses recursion. In this example, a function can be called multiple times with the same argument.

And with memoization, the same function will be written like this:

I splitted this function in 3 steps:

If you add a console.count(n) in the second if(), you will see that with memoization, fibonacci(12) will compute the value of fibonacci(4) only one time instead of 34!

Memoization is possible because, in JavaScript, functions are prototypes of Object.

As you can see, with memoization, we trade the code's readability for performance.

Now we have seen how memoization works, let's see how to apply this technique in a Vue.js component.For that, we have to put the function into a Vue's methods. Then, it's pretty much the same as what we saw before.

Is it worth the trouble?

In this very particular case: yes. My component is using a time-consuming function multiple times with the same parameters. 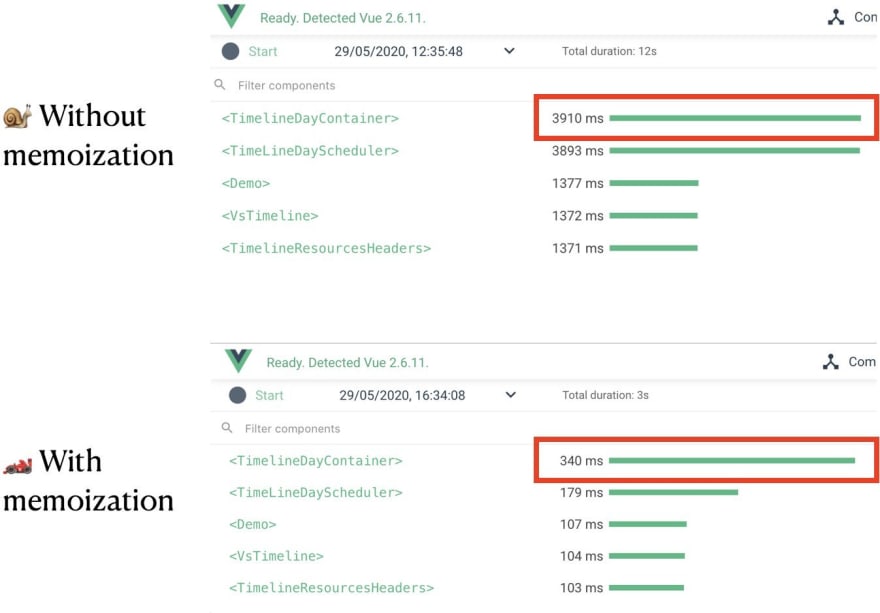 However, I don't see memoization as a golden hammer. To be honest, it's the first time I use memoization in years of web development.

And that's it for today!

Thanks for reading this article 🤘. I hope you found it useful! If you liked it, please give it a ❤️ or a 🦄!

Once suspended, maxpou will not be able to comment or publish posts until their suspension is removed.

Once unsuspended, maxpou will be able to comment and publish posts again.

Once unpublished, all posts by maxpou will become hidden and only accessible to themselves.

If maxpou is not suspended, they can still re-publish their posts from their dashboard.