This blog post is the first of a serie of 3, called "Enigma: Understand it, implement it, crack it":

If you find any typo please just make the edit yourself here: https://github.com/maxime1992/my-dev.to/blob/master/blog-posts/enigma-part-1/enigma-part-1.md and submit a pull request 👌

Have you ever heard of Enigma?

Maybe if I mention the movie "The Imitation Game", does it ring any bells 🔔?

Enigma is an encryption device built in 1918, right after World War I. During World War II, the Germans started to use wireless communication systems (using radios and morse) on the battlefield because wires were fragile, could be cut and were hard to move. It also gives an important strategic advance as you could communicate from the land with a boat for example. There's only one catch: Whoever tunes in can listen to the broadcast. It's not what you really want to keep the advantage over your ennemy...

Instead of broadcasting plain messages, they decided to send encrypted ones, using Enigma.

Few weeks ago, I went to Bletchley Park (less than an hour from London by train). It's where a lot of efforts have been made in great secrecy to break Enigma's code. At some point, 9000 people were working here on a daily basis and as small as the whole complex was, the importance of the mission was paramount.

I've been really amazed by the work of all the brilliant minds there, the whole organization and of course, by the "Bombe". 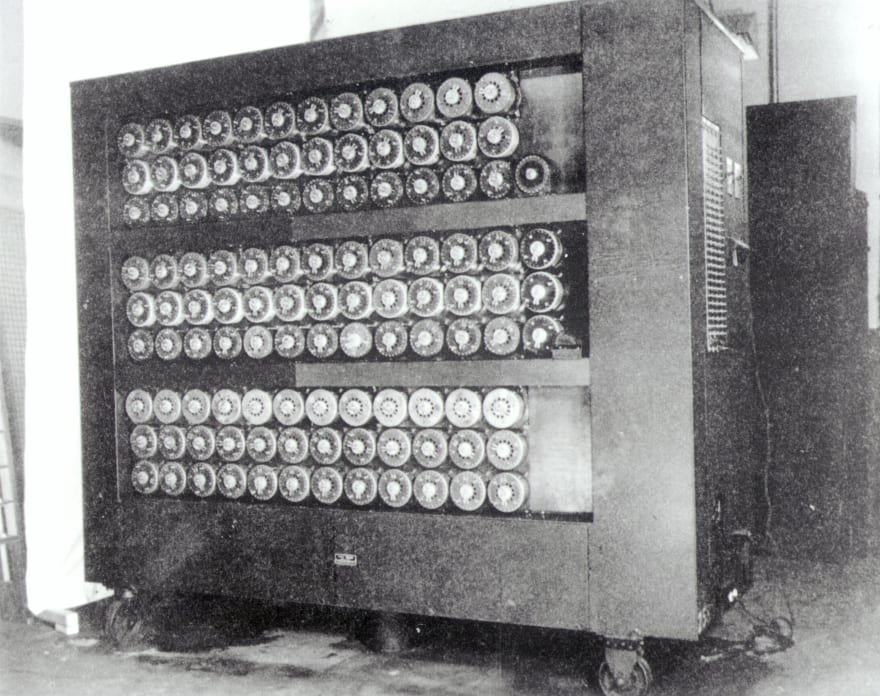 In order to get a better understanding of how Enigma works and what's happening behind the scenes, I've decided to implement a Typescript version of the machine. But before we dig into the code in the part II of this serie, we have to actually understand the mechanism first.

Many versions of the Enigma machine exist. But today, we will be focusing on one of the first versions. Why? 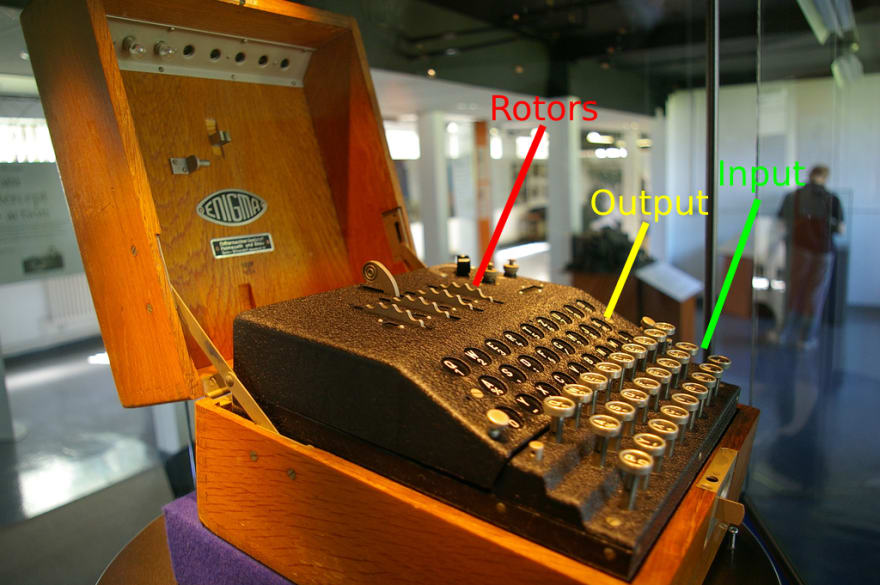 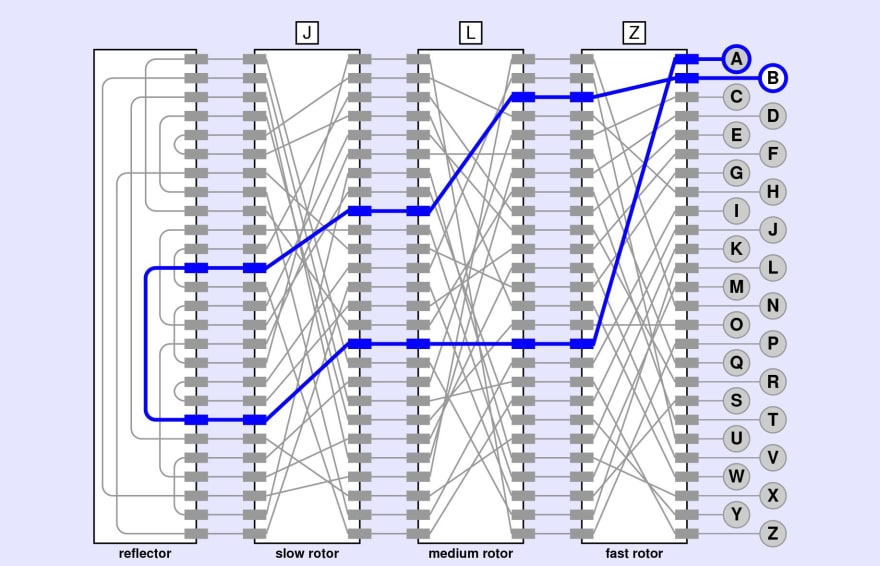 How does a rotor work

From an internal point of view, a rotor is simply mapping letters to other letters. 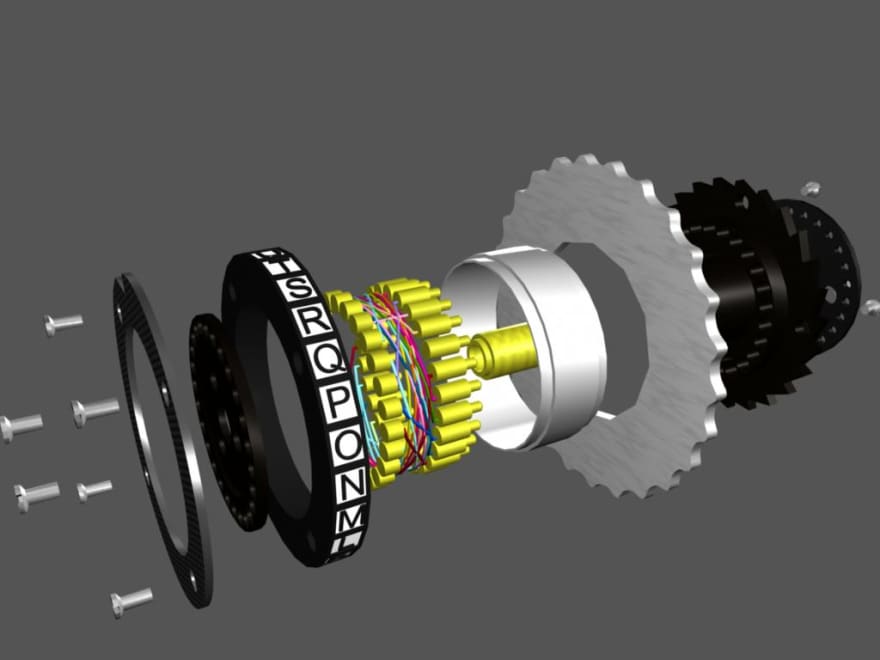 Notice the yellow part above with all the wires? For every input of a letter, it's physically connected to a different output or the same output. (CF the pink cable around the top, connected to the output in front of the input --> same letter).

The first versions of the machine only used 3 rotors, but 5 where available. The connections inside the rotors didn't change, but it was possible to change the order of the rotors and their initial letter. Those settings were changed every days, generating a humonguous number of different solutions to encrypt a message.

Here's an example of that remapping with the first 3 rotors:

The first thing you'll probably think about, is that it can be represented in the following way:

But it's important to correctly understand what the above means:

Here's a visual example, where if we type the letter D as input, we would so far (without the reflector) get the letter E as the ouput: 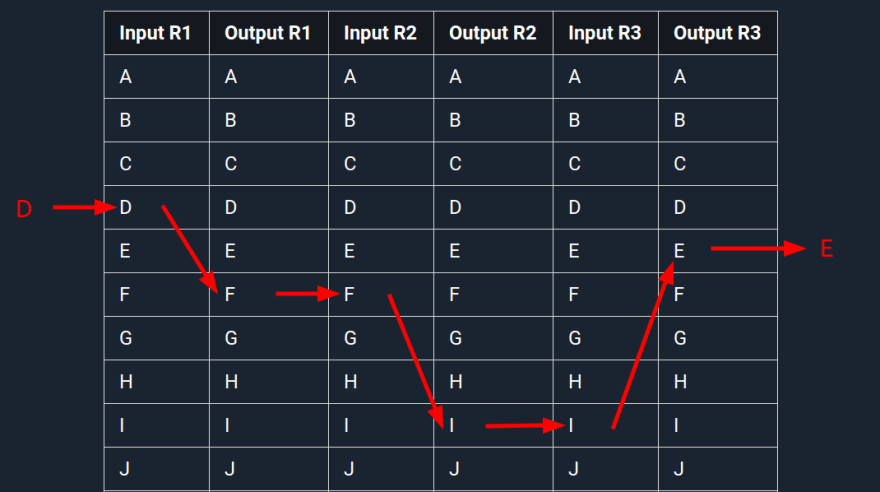 Do you notice how the arrows between 2 rotors are always horizontal in the above schema?

How do they interact with each others?

Physically, this is how the rotors are connected: 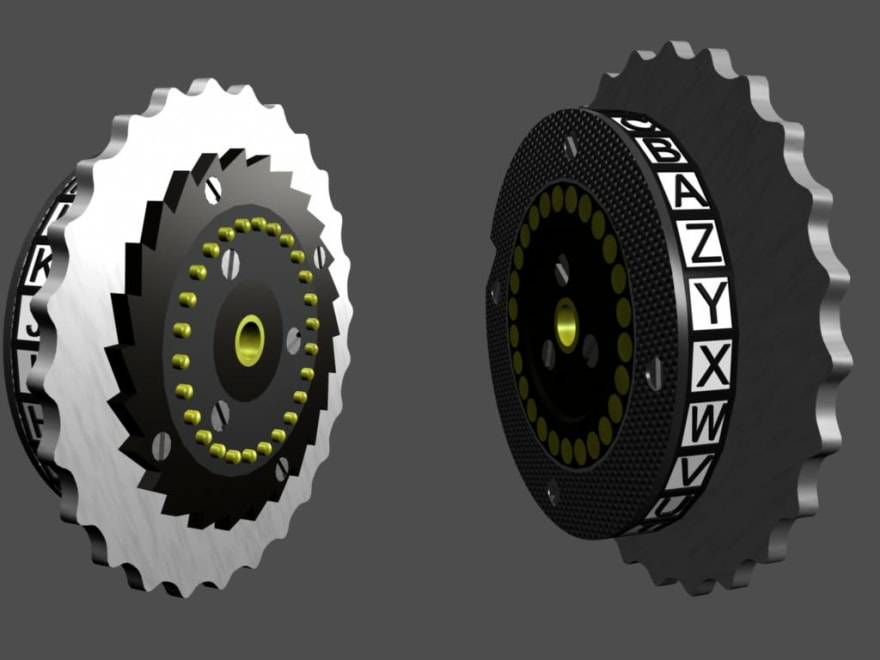 It's important to understand that the "scramble" happens within the rotor itself and only the index of the output counts. Because a pin from the first rotor will always be connected to the pin right in front of it, to the other rotor.

How and when do the rotors spin?

You can think of the 3 rotors like you would with the time displayed on a clock:

With Enigma, it's pretty much the same but with a base 26 instead of 60 (for the length of the alphabet).

How does the spin impact the path of a letter?

When the first rotor spins, the path will completely change.

If we type D as an input the first time, we have:

But if we type D again, the first thing happening is that the first rotor will move by an offset of 1. So the new path for a D will be: 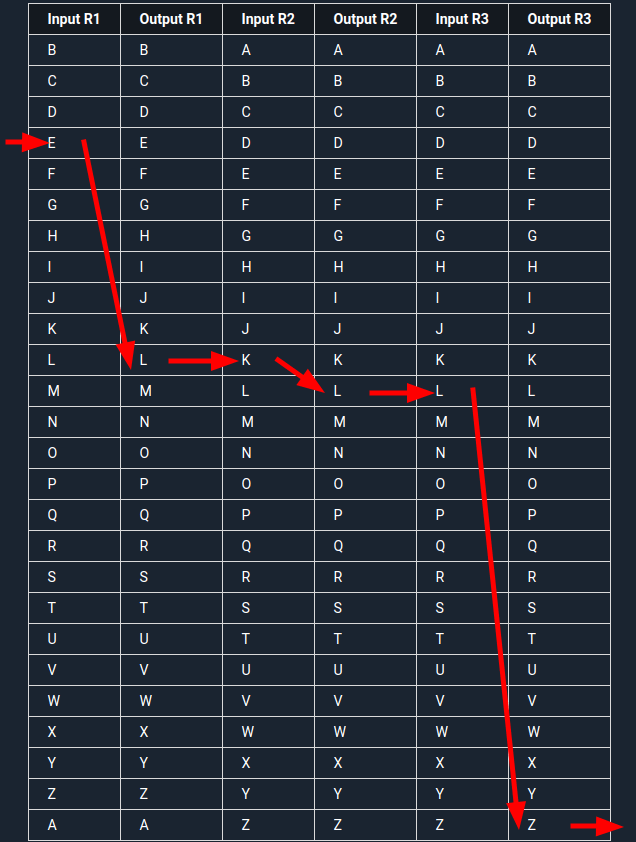 In the above, 2 important things to notice:

At the beginning of the "High level principles", I mentionned briefly that the machine has a reflector.

If you look at the image again, you can see it on the left:

The particularities of a reflector are:

Note: The second point is a really important characteristic of the machine. When typing a letter as an input on Enigma, it is impossible to get the same letter as the ouput.

The full path would look like the following when we type the letter D as the input: 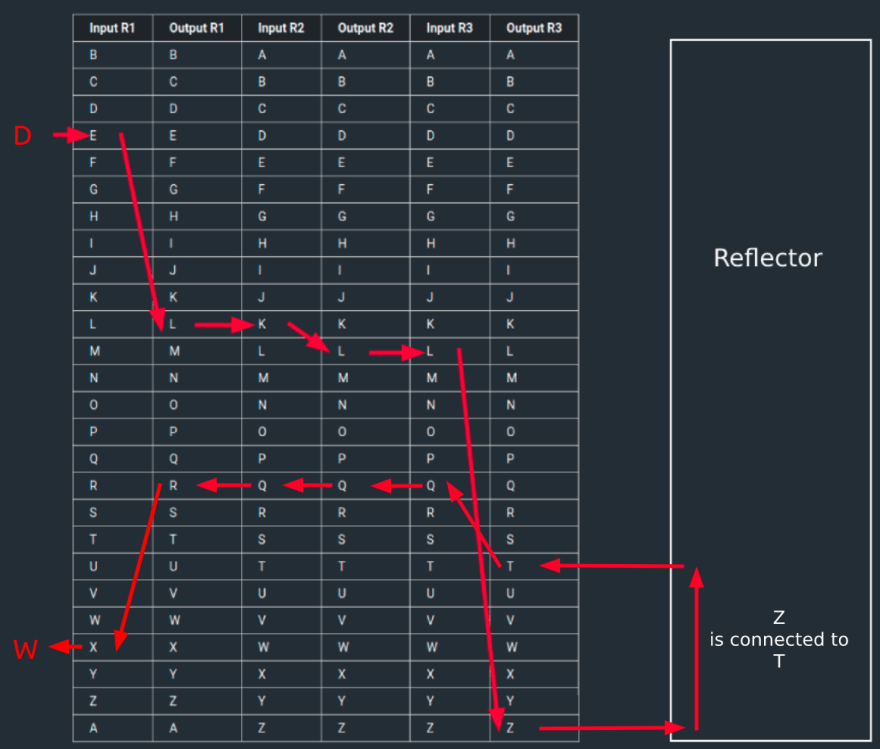 The core principles of Enigma are not so much complicated, but the machine was considered as a secure device (and unbreakable) for a long time due to all the possibilities, settings and "randomness" where you could type the same letter multiple times and get different outputs.

I hope you enjoyed learning about Enigma in this blog post. Please let me know in the comments if anything is unclear as the next part of the serie will be to see how we can simulate the behavior of the machine with Typescript.

Challenge: Implement your own Enigma!

Can you come up with the above specs to your own implementation of Enigma before reading the part II of the serie? ;)

It doesn't matter the language, it doesn't matter the platform (web with a UI, command line, Android/iOS app, etc). If you manage to build it, share your code on an open source repository and let me know in the comments. I will add your solution to a list so that we can all easy find and compare different approaches! Spread the word 🐙 ...

If you've found a typo, a sentence that could be improved or anything else that should be updated on this blog post, you can access it through a git repository and make a pull request. Instead of posting a comment, please go directly to https://github.com/maxime1992/my-dev.to and open a new pull request with your changes.

My First Ruby On Rails Project

Continuous vs. Categorical: How to Treat These Variables in Multiple Linear Regression

Maxime
Software engineer. Trying to share more on dev.to about my discoveries and side projects. Favourite stack: Typescript, Angular, NestJs.
Brute-forcing an encrypted message from Enigma using the web worker API
#cryptography #enigma #angular
Building an Enigma machine with only TypeScript and then use Angular DI system to properly instantiate it
#cryptography #enigma #angular