Shopify powers 20% of the world’s online stores according to Statista. It provides a virtual storefront as well as everything merchants and brands need to run their business. As you scale though, it’s possible that you outgrow its native capabilities and need something more flexible.

Enter headless: By separating the back from the frontend, headless commerce provides merchants with greater flexibility and scalability. Headless Shopify is a solid option for brands and merchants already using Shopify to take their online stores to the next level.

With an online store built on headless Shopify, you have total control over your eCommerce design, technology stack, user experience, and features. All while keeping all the things that make Shopify great like its payment processing options, inventory management, and PCI compliance.

In this blog post, we will explore what headless Shopify is and how it can benefit your business. We will also discuss some of the pros and cons of using this platform so that you can make an informed decision about whether or not it is right for you. So, let's get started.

What is headless commerce?

Headless commerce architecture decouples the presentation layer –your storefront, composed of templates and themes– from your database or eCommerce platform. This gives businesses more flexibility and control over their checkout process, product pages, SEO, user experience, and overall branding.

In a headless model, your commerce platform isn’t in charge of every aspect of your online store. Instead, you use it as a hub to connect third-party software and tools like ERPs, OMS, and PIMs using APIs. Rather than centralizing everything like a monolithic platform would, a headless one serves as the connective tissue that enables the interaction of different, separated tools. 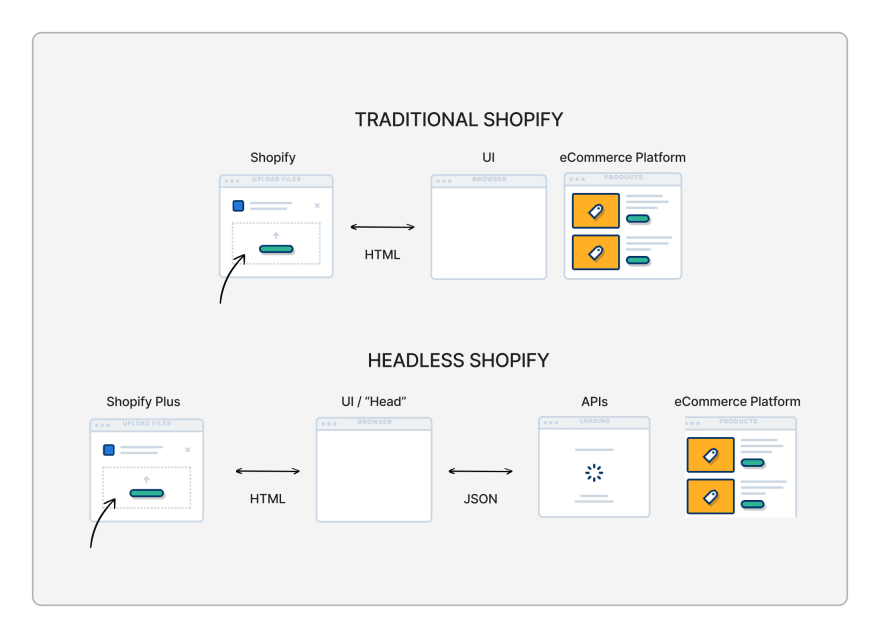 Because of its independent architecture, you can update every part of your eCommerce infrastructure without compromising your storefront and vice versa, enabling you to swap components with ease.

Leveraging a headless commerce platform gives mid-size brands and online stores the tools they need to go to the big leagues, grow faster, and build feature-packed digital experiences tailored for their customers.

We wrote a comprehensive article about what is a headless CMS, if you want a deep dive into the headless architecture, take a look.

What is headless Shopify?

Headless Shopify separates the frontend from your backend, enabling developers to use frontend frameworks like Gatsby and Next.js to build storefronts. This can be easily done by pulling data from Shopify using the storefront API.

Shopify is built on a Rails monolith that handles every aspect of your eCommerce store, from back-office operations to product management and commerce capabilities. Headless Shopify rests on a Shopify Plus backend that integrates commerce services like product management, shopping carts, and content management. All of these integrations are connected via APIs and the Shopify storefront API connects it with your frontend. 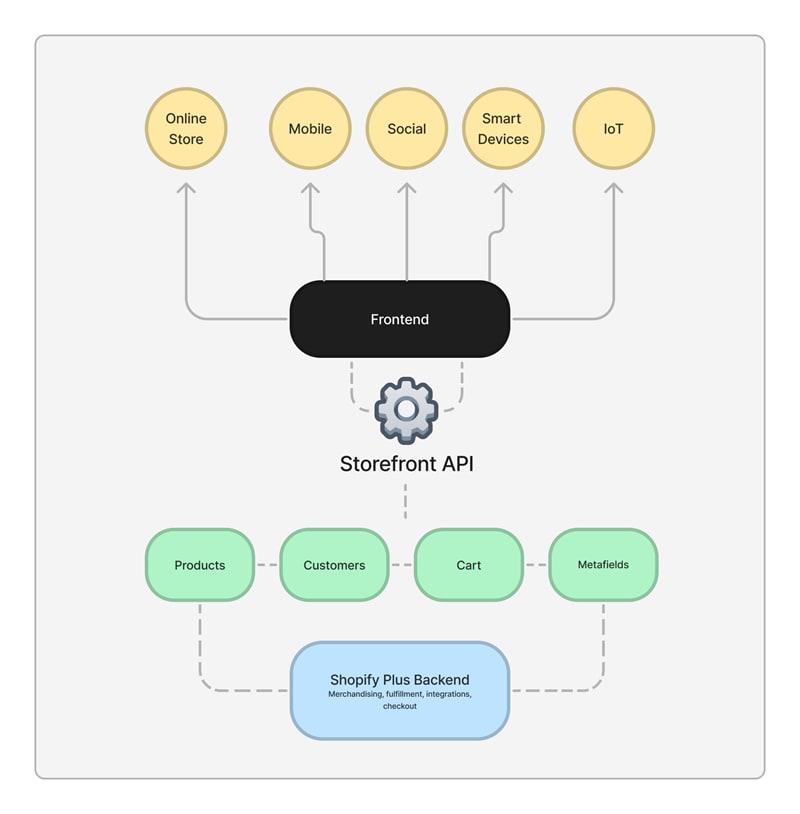 While traditional Shopify is a great commerce platform, as you scale your Shopify store may become unwieldy in a similar way to what happens with WordPress. A headless Shopify store, on the contrary, can scale almost infinitely without needing a costly overhaul.

To go headless, you need a Shopify Plus account. Shopify Plus gives you access to Shopify API, a connective layer that enables developers to extend Shopify, unlocking higher performance and deeper integrations with third-party software.

Shopify’s storefront API is device-agnostic and enables developers to build custom storefronts using pretty much any frontend framework or libraries like Next.js and Gatsby. Thanks to Shopify’s API, you can create all kinds of commerce experiences such as mobile apps, web apps, and deliver content to IoT apps and smart mirrors.

Decoupling Shopify is a great idea when you need more than what WordPress has to offer through its templates, but you still want to sell through Shopify. However, bear in mind that going headless with Shopify is a rather technical process. You should note that it requires help from experienced developers or a headless commerce agency, especially if you want to launch your store soon.

What’s the difference between headless Shopify and traditional?

More control over your commerce experiences

With traditional Shopify, you’re constrained by plugins and themes. Headless commerce gives you complete control over not only what you build but where to deliver your content as well. Headless architecture unlocks new channels and devices, allowing your brand to go omnichannel and deliver a better customer experience to consumers in emerging channels.

By decoupling the frontend from the backend, a headless setup separates concerns. That means developers can focus on building the UI while marketers and content editors can create content and update product information independently, resulting in faster time to market and less time spent on updates.

When used in conjunction with frameworks like Gatsby and Next.js, a Shopify store can reach a sub-three-second speed, no matter how many products you have. Modern frontend frameworks are optimized for speed and aren’t constrained by plugins or themes, which makes them faster than a custom storefront.

While Shopify is great for SEO, the headless approach gives you greater flexibility on choosing SEO-friendly tools and frameworks to give you even more granular control over how to optimize your websites. Plus, most of the Shopify headless sites score high in the Google Core Vitals score, giving you an edge over your competitors.

Let’s not forget that Shopify is the biggest eCommerce platform in the market. That means everyone wants to partner with it.

Themes are awesome to use if you want to get started quickly. With that said, they dictate how your store should look. A headless storefront, while unable to use traditional Shopify themes, can use website starters to get things going quickly. You can also edit from there, almost like a theme but with all the flexibility to change every pixel of your Shopify store.

Granted, all the new pieces of your headless build will introduce some complexities to your store, but they will give you freedom of choice. A headless store can scale up and down with you and will always be ready to meet your customers’ demands, whereas a traditional store that’s relatively easier to set up can fall short and become unwieldy.

Things you need to know before going headless

In this experience, we worked closely with Varcroft & Bianco's tech team to create a seamless integration between their 3D product configurator and Shopify. We designed the UI with Figma and built it in React.

Users are able to design their own drawer inserts in the progressive web app and order it directly with Shopify, which has been integrated into the app through the Shopify API.

Is a headless Shopify store right for you?

Undoubtedly, headless commerce has many benefits. Most notable is complete control over customization, flexibility, and speed. The most important of these depends on your specific needs and how much scaling you anticipate.

In addition, if you already use Shopify, Shopify headless is definitely worth considering.  if With a little bit of set-up work up front or the help of a trusted partner, you can future-proof your eCommerce business and avoid costly overhauls as your consumer base grows.

Ultimately, going headless is the right move if you:

If you meet at least three of those five requirements, a headless Shopify solution can be the catalyst for your brand’s growth. Likewise, partnering with a headless commerce development agency like Ikius could add some fuel to that fire. Contact us and let us help you take your brand to the next level.

How to Easily update an Object that's in state in React

How to simplify QA by testing frontends in production

How to Use Morgan in Your Node.js Project

Pico.css : Do you ever heard of this CSS framework

Once suspended, maxikius will not be able to comment or publish posts until their suspension is removed.

Once unsuspended, maxikius will be able to comment and publish posts again.

Once unpublished, all posts by maxikius will become hidden and only accessible to themselves.

If maxikius is not suspended, they can still re-publish their posts from their dashboard.

Once unpublished, this post will become invisible to the public and only accessible to Max Ikäheimo.

Thanks for keeping DEV Community 👩‍💻👨‍💻 safe. Here is what you can do to flag maxikius:

Unflagging maxikius will restore default visibility to their posts.