Ever wondered when you make a change in a single file and on saving it some tools like angular or other clis or nodemon automatically react to it by bundling and redeploying the application?

Also while using an ide, when you do some mistake in code and save it, all the dependent files turn red due to an error!

The reaction is coded on ide or cli...but how they keep a watch on files and How it gets to know about events like create, modified, deleted and How we can custom automate something.

I needed such a tool that can listen to the file change events as I was using AngularJS and it does not have an inbuilt cli as angular2+ has. So I looked for something that can help me to automate the build. I use ubuntu so I searched and I found the tool named inotify.

I achieved the hot deploy feature by using the inotify with a bash script. I have written a shell script like below 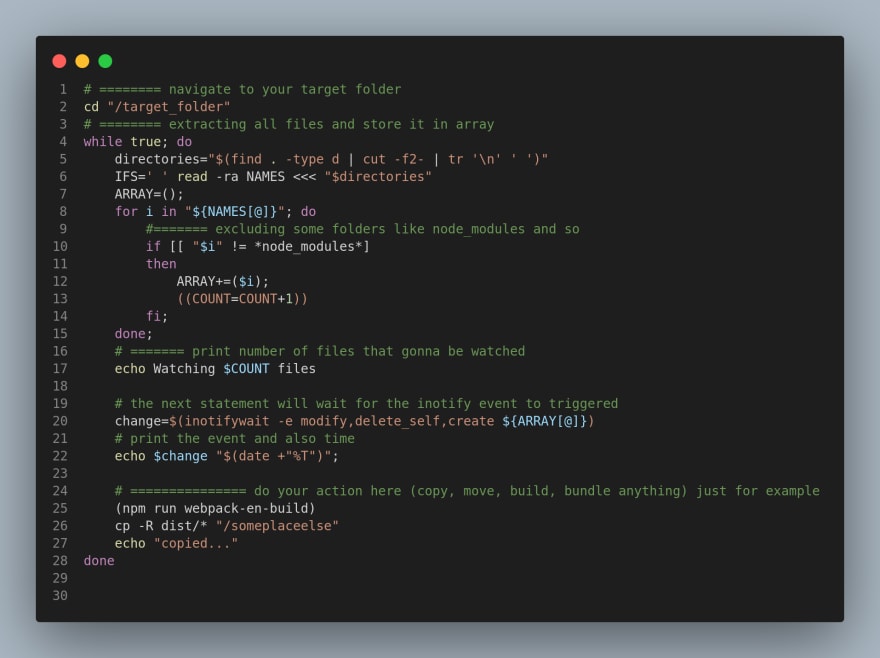 or check out this git repo

I'm not gonna bore you by writing about more functionalities, and stuff of inotify but let's just take a look at the simple example
First to install the inotify, just hit the following command

Here is a simple bash script which watches the changes of a file name a.txt and on change, it writes the log to b.txt

How to Make a Rideshare App and Is It Worth Doing?

Maulik
An ever-smiling full-stack developer, specializing in the rapid development of custom web applications. Always eager to learn new technologies and concepts and share knowledge.
Go Corona Go - 3d web game
#dohackathon #javascript #webdev #gamedev
Why did I choose to become a developer?
#webdev #watercooler #devjournal #career
What is load testing? and why is it important?
#webdev #testing #performance #productivity
Forem Open with the Forem app