MatHem is Sweden's leading independent online grocery shop, with a distribution network reaching over 50% of Swedish households and a strong brand built over the past ten years.

Using your fingers to type on a keyboard or phone when searching for things to buy is the assumed most efficient way to shop online. Along came voice assistants a few years ago as a good alternative to the screen.

I think there's a good point in minimizing pulling the phone up from our pockets and in my family we have a habit of using old fashioned hand written shopping lists that, when it's time to place the order, we type into the search bar at Mathem. This means we're writing it twice - once with a pen and once with a keyboard which is way too inefficient.

To tackle this problem I decided to bridge the gap between the physical list and the online cart by building a scanning device that uses hand writing recognition along with existing Mathem APIs. I wanted to have this done as a weekend project, and knowing that the 3D modelling and printing would be the most time consuming parts, I decided to time cap the development time to a minimum and write as little code as possible.

Since MatHem is already runs on a 100% serverless architecture, the obvious path was to hook this into that and rely on AWS's serverless offerings for AI/ML.

I decided to use components I had lying around at home;

The case was printed using a Creality Ender Pro 3

Wiring the bump sensor is easily done. It has three pins - one for ground, one for power and one for GPIO - take note of the pin you use. In the code below I use GPIO 12, but it could be any GPIO.

Firstly I had to decide where to do the inference - on the edge or in the cloud. There are solutions for this that can run on the Pi, but that would tie this feature to the hardware. What if I want to move it to a less performant hardware or integrate it in our mobile apps?

The only benefit I could see for running it on the Raspberry Pi would be that it'd probably be faster since it would be fewer round trips to the cloud.

With extensibility in mind I decided to make the edge device dumb and literally just capture the image and upload to the cloud and handle the AI there.

At Mathem we use Cognito User Pools for authentication. Since the UI for this this device is just a bump sensor we need to perform a headless login. I perform this the same way as you do headless authentication to your WiFi network, but with a custom file in the boot partition, mh-credentials.json:

This reads the credentials file and uses pycognito to authenticate the username and password.

Next, we initialize the camera and the bump sensor

The above snippet assigns capture() as a callback to the GPIO event.

Note that the S3 key will have the format <userid>/<timestamp>.jpg. More on that later.

To make this run on startup, add the following to /etc/rc.local:

Already having a 100% serverless architecture made it simple to hook this workflow into the mix.

The prerequisite for uploading an image in a secure manner is to obtain a pre-signed URL that allows this. Having already authenticated the device, we can now call an API Gateway endpoint that authorizes the user before invoking the following code. For nodejs we use Jeremy Daly's lambda-api.

Next we need to act when new images get uploaded. We do this by triggering a lambda function upload-trigger.js when new objects get created.

AWS offers two AI services that can recognize hand writing; Rekognition and Textract. At first I wasn't aware that Textract had this capabliity, but it turns out it was announced only about a month prior to the time of writing.

Using the Rekognition API worked ok, but it wasn't great once the hand writing turned scribbly. Also, as you'll see later on, the camera is fitted a bit too close to the paper, so no matter how I adjust the lens, it will always be out of focus on that distance.

Once I realized Textract had similar capabilities I did some side-by-side comparison and saw that using Textract takes this project a step away from being a fun proof-of-concept and closer to an actually useful device.

Here follows an example of using the same blurry image in Rekogintion vs. Textract. Since MatHem is currently only offered in Swedish, so are the items on the list:

Here we can see that Textract nailed all four words while Rekognition really struggled. Now, our product search engine allows for typos, so the end result still often made sense with Rekogintion's results, but Textract was still superior.

Also - Rekognition just gives a list of words and their coordinates in the image while Textract categorizes the matches into blocks, so for example "bar of soap" would be one search term using Textract, but three separate ones using Textract.

Pricing is similar and although Textract is charged a bit higher, for our volumes it's neglectable.

With all that in account and the fact that Textract is the better service name, the choice was simple.

When an image is uploaded, we trigger the following Lambda function:

When calling the Textract API you can choose if you want to do it synchronously or in a asynchronous fire-and-forget manner. The latter means that you pass it an SNS topic ARN to which it sends a notification when the job is done.

Here I went for the synchronous call since these images are small and processed fairly quickly (~2s) and I feel it favours the end-to-end duration.

That's it for the code. The detected text is passed to internal APIs and the front end is updated using web sockets, but that's out of scope for this article.

The initial proof of concept wasn't presented in a very usability inviting way, so I had to wrap all the wiring up in a sturdy case:

The end result is this wall mounted beauty: 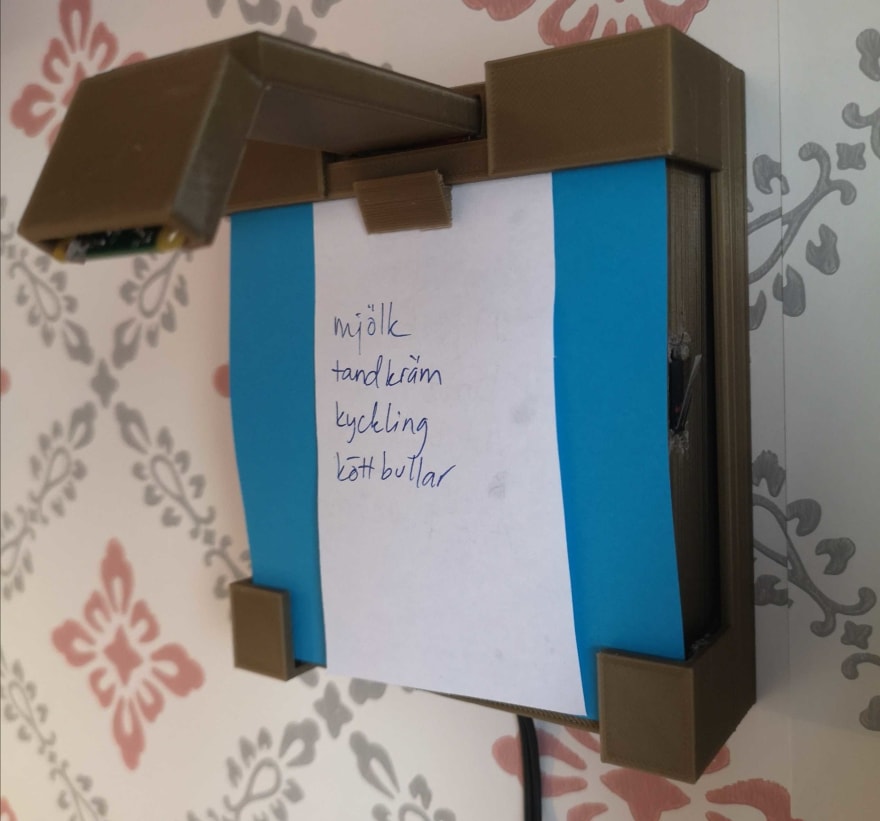 I'm a noob when it comes to 3D modelling, but it's really easy to get started with Tinkercad.com.

The case consists of three items; 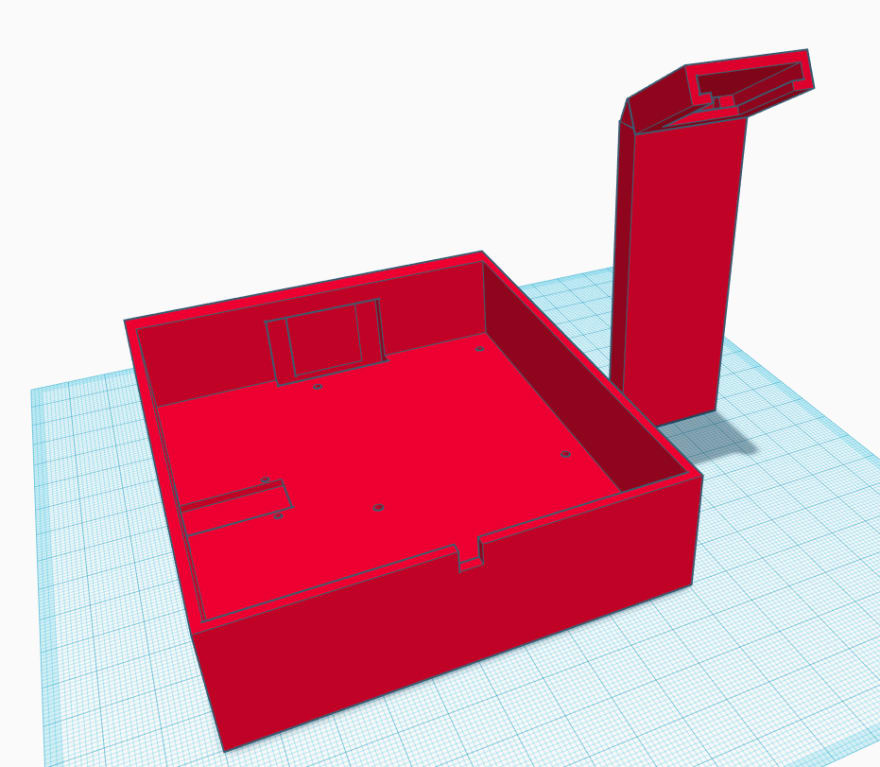 Printed and all wired up it looks like this: 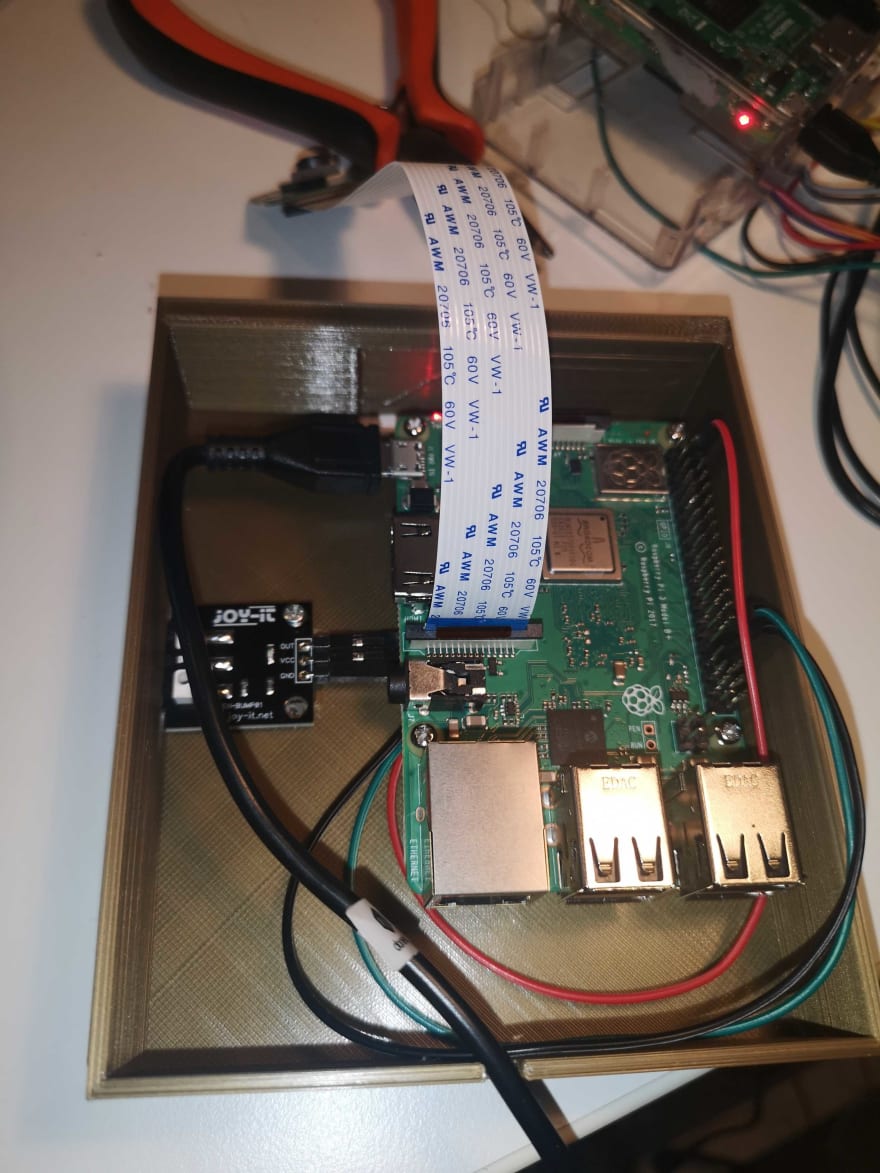 These took ~12 hours to print 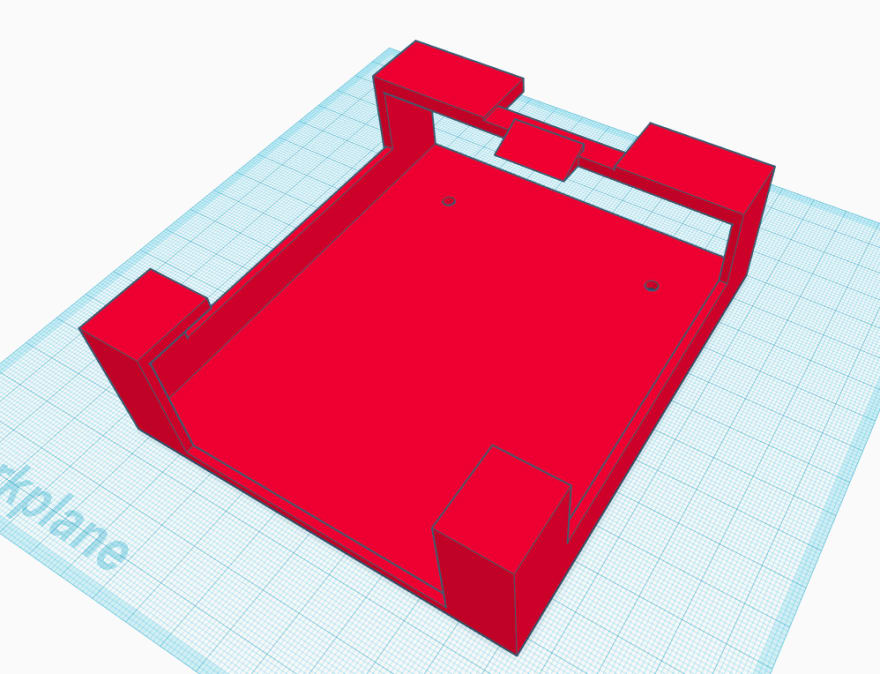 This took an additional 8-9 hours to print.

The inner casing slides perfectly into the mount and the back of the mount secures the loose cables in place.

Here I have mounted it on the wall in the kitchen next to my Echo Show on which I've used Firefox to browse and log in to mathem.se for the sake of this demo. I also coated the device with a blue paper to add some friction to when I push the shopping list in.

Please get in touch if you have ideas for improvement or other applications for this use case.

Build a Wordle-like SMS game with Twilio Serverless in JavaScript

How to Become an AWS Community Builder

Different Ways of Deploying a Microservices Application on AWS

Serverless can benefit from not being so Lambda-centric