Some time ago I blogged about a fantastic project Gerardo Richarte and I were doing with an 18-bell tower located in Argentina.

Back then, I showed some details of the architecture, code, and how I mocked-up “El Carrillon” with a homemade LED piano so I could test it at home.

Later on, I wrote another post, where you can see it running live and read some great news about the project (including an award!).

El Carrillon is the first VASmalltalk IoT project to appear as a showcase in the official RaspberryPi magazine, The MagPi!. It was a pleasure for me to work on the project with Gerardo Richarte, and thanks to Instantiations for their support! 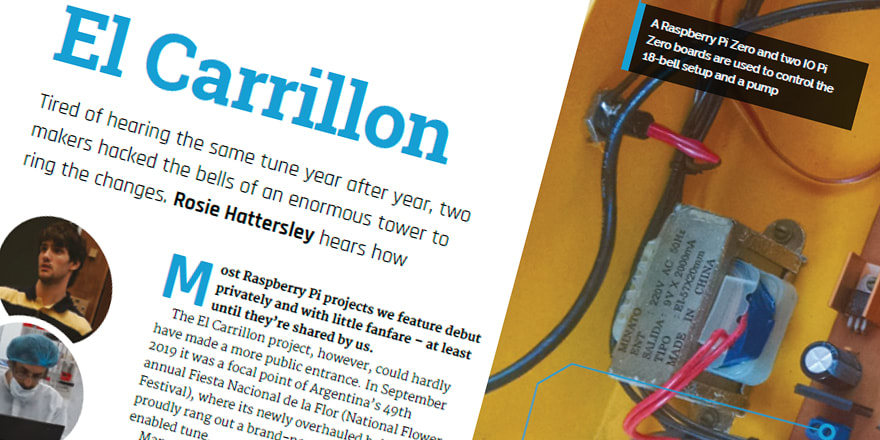 BIG NEWS: El Carrillon is the first #VASmalltalk #IoT project to appear as a showcase in the official #RaspberryPi magazine! It was a pleasure working on the project with @gerasdf, and thanks to @instantiations for their support! twitter.com/TheMagPi/statu…
The MagPi magazine @TheMagPi
For the afternoon crowd: #MonthOfMaking is BACK this March! Build, share, and have fun! More info in issue 91 of The MagPi, the official Raspberry Pi magazine https://t.co/Whqk3TLSJR https://t.co/O6WzaeFJJa

Building a Spark cluster with two PCs and a Raspberry Pi.

A Simple Overview of Arrays in Go

Trending on DEV
How I turned my Raspberry Pi into a private cloud server
#raspberrypi #docker #nextcloud
Developer Fears: Legacy Code
#fears #legacycode #career #coding
Do you think ageism in tech is improving?
#discuss
May 29th, 2020: What did you learn this week?
#weeklylearn #discuss #weeklyretro
You set up a new dev team. What are the first things you would do to make things go as smoothly as possible?
#watercooler #discuss #leadership
Is open-sourcing server-side code a security threat?
#security #opensource #discuss
Where to Find Remote Developer Jobs 🏝️
#career #codenewbie #webdev #beginners
Which hosting do you use?
#webdev #aws #javascript #discuss