In one of our previous articles in this series, we discussed what an operating system is and why Linux Operating Systems Are Called Distributions. We know that the kernel is the most crucial component of the operating system. The kernel recognizes all the physical hardware on a computer and enables each component to speak to one another. At the root, the kernel grabs the instructions passed to it and gets them processed by the hardware. 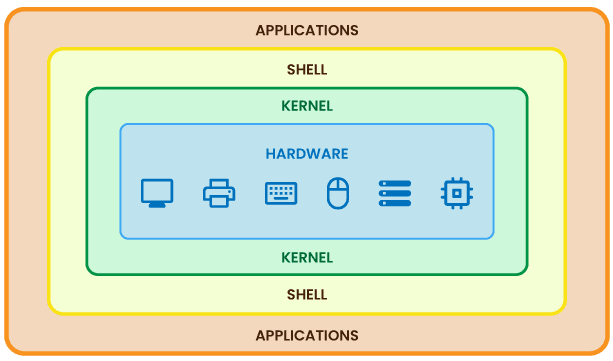 Most of the Linux distributions come with a shell called the bash shell. Bash is originally the GNU Project shell and was inspired by and built to mimic the original Unix shell program, sh, written by Steve Bourne. Since it was highly inspired by the sh, which was written by Steve Bourne, the folks at the GNU project decided to name the new shell bash, which is an acronym for Bourne Again Shell.

Many alternatives to the bash shell can be used with the Linux kernel, such as ZSH (ZShell), Fish, KSH (Korn Shell), etc. Different shell programs offer different features, but the basic commands and how to interact with the shell remain the same.

Different distributions of Linux come with a Desktop Envornioment installed with it, such as Ubuntu. Ubuntu's Desktop Environment is a modified version of GNOME which stands for GNU Network Object Model Environment. GNOME is a graphical user interface (GUI) and set of computer desktop applications for users of the Linux operating system. When using a Graphical User Interface (GUI) such as GNOME, you need software that can interact with the shell and pass commands that the kernel can execute. This program is called an emulator because it emulates the shell environment for you on your desktop interface.

Terminal software is a perfect example of an emulator. Terminal ships by default with the Ubuntu Desktop environment and can be used to access the shell. Many emulators are available, and the terminal is just one of them. What is essential to understand is that the emulator is not the shell. It's just a piece of software that enables you to emulate and communicate with the shell in your desktop environment.

If you liked the article, consider subscribing to Cloudaffle, my YouTube Channel, where I keep posting in-depth tutorials and all edutainment stuff for software developers. You can also follow me on Hashnode; my profile handle - @Cloudaffle. Leave a like if you liked the article; it keeps my motivation high 👍.

Once suspended, manikbajaj will not be able to comment or publish posts until their suspension is removed.

Once unsuspended, manikbajaj will be able to comment and publish posts again.

Once unpublished, all posts by manikbajaj will become hidden and only accessible to themselves.

If manikbajaj is not suspended, they can still re-publish their posts from their dashboard.

Once unpublished, this post will become invisible to the public and only accessible to Manik .

Thanks for keeping DEV Community 👩‍💻👨‍💻 safe. Here is what you can do to flag manikbajaj:

Unflagging manikbajaj will restore default visibility to their posts.