Last week, I saw an interesting thread discussion about how to reduce the Largest Contentful Paint (LCP) time that is caused by a component that takes a long time to load.

The initial suggestion by the thread starter was to:

Hence, I decided to write this article to share my findings on what it is 💪 I'll also share the resources at the end if you are keen on reading the articles yourself.

Before stumbling upon that thread, I always had the preconception of just adding a Loading Spinner if any component requires a loading state due to slow operations such as fetching of data or updating the database.

However, when I read up online on how Skeleton Loading is usually implemented, it is actually this specific component that we sometimes see on social media, newspaper and community platforms 👇

That kind of explains why this component is called the Skeleton Loading component since it is literally this:

Afterwards, I looked up on how it is usually implemented.

There were 2 common packages that were brought up

On their sites, examples of how to use the Skeleton component from the respective packages were included. In both examples, the use of an if else conditional rendering statement in the component directly was necessary in the component render method.

Despite having 2.1k ⭐ on its Github repository, It was a little hard to find from their documentation on how specific variants of their component look like. However, I noticed that they do have a storybook (a popular library for showcasing frontend components). If you're keen, you can clone it and start it locally as well to see what they offer. 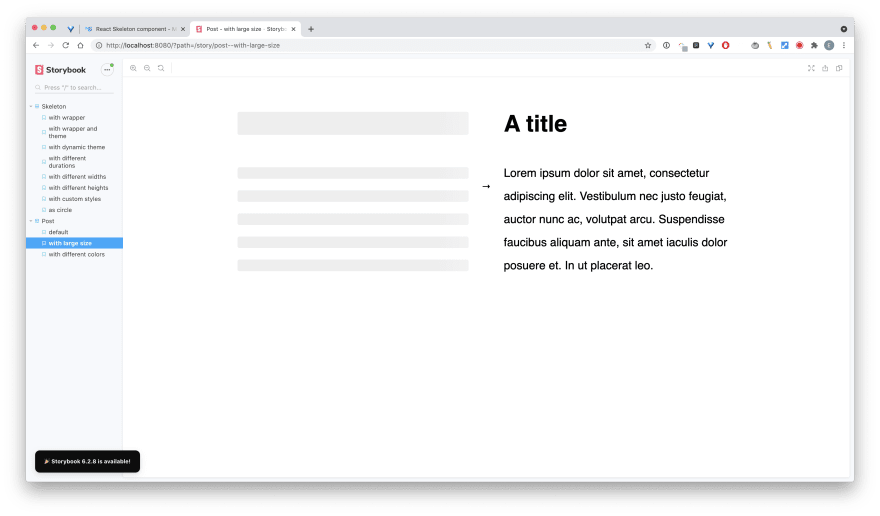 For the types of Skeleton components that they offer, you can visit their site for viewing directly, their documentation is quite detailed. The Github repository for this library has 67.6k ⭐. 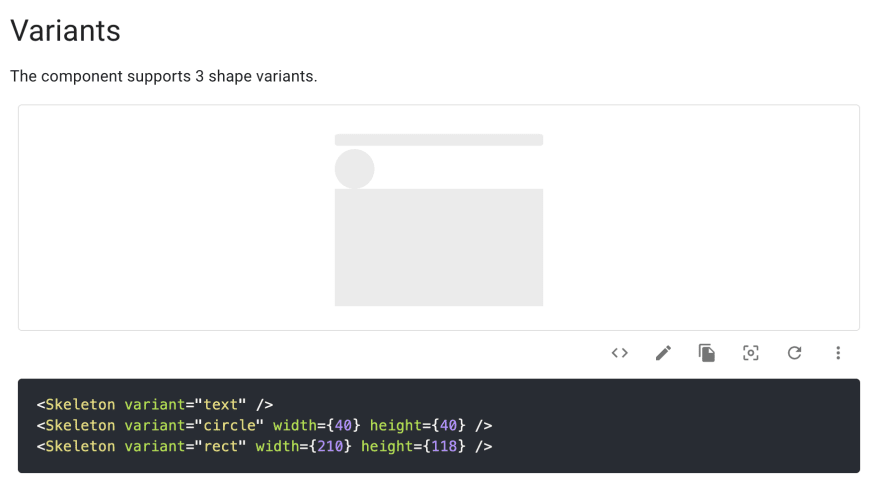 Material UI also included this article by Luke Wroblewski (currently Product Director at Google) on why the loading spinner should be avoided.

Food for thought on the package 🍎

Both packages seem pretty good if we require a Skeleton component. The Material-UI library also comes with a lot more of other components, styles and features rather than just the Skeleton. However, if we don't use them then it could take up more file size than necessary when we build and bundle our app. You will have to weigh the pros and cons when deciding which package to use.

Food for thought on the code example 🍏

But why do we have to write it this way 🤔

An idea then came to my mind 💡 - why not implement the Skeleton logic with React Hooks? ✨

💡 So, I'll try to do that and share the results of my attempt in the next article, look forward to that!

Meanwhile, below are the resources that I read through before writing this article, they were very insightful and you can have a look at them too!

Resources on what is React Skeleton and why use it:

Resources on how React Skeleton can be implemented:

Thank you very much for reading this article! 🌟

Leave a heart 💌 and a unicorn 🦄 if you like this article!

Please give me some feedback below 👇 I would love to hear from you about how you feel after reading this article or if you have any recommendations for me to learn how to write custom hooks!

A chrome extension everyone must have | part 1

Estee Tey
A gamer, designer and builder. I enjoy thinking about how and why we code.
How to create and test a GitHub Action that generates Supabase database types
#javascript #opensource #github #tutorial
A Strange Moment.js — 3 Gotchas for Working & Testing with Datetimes
#javascript #tutorial #testing #node
How to create a CSS Playground for styling Pseudo-elements with Vanilla JavaScript
#javascript #html #css #tutorial