How to generate types from a Supabase database

On the Supabase documentation, there is a page on generating types. Following the instructions, the script to run looks something like this.

Note the additional --version=2 parameter. This probably became a mandatory prop after some update to the openapi-typescript tool.

The values for the anon key and URL can be found in the Supabase dashboard. 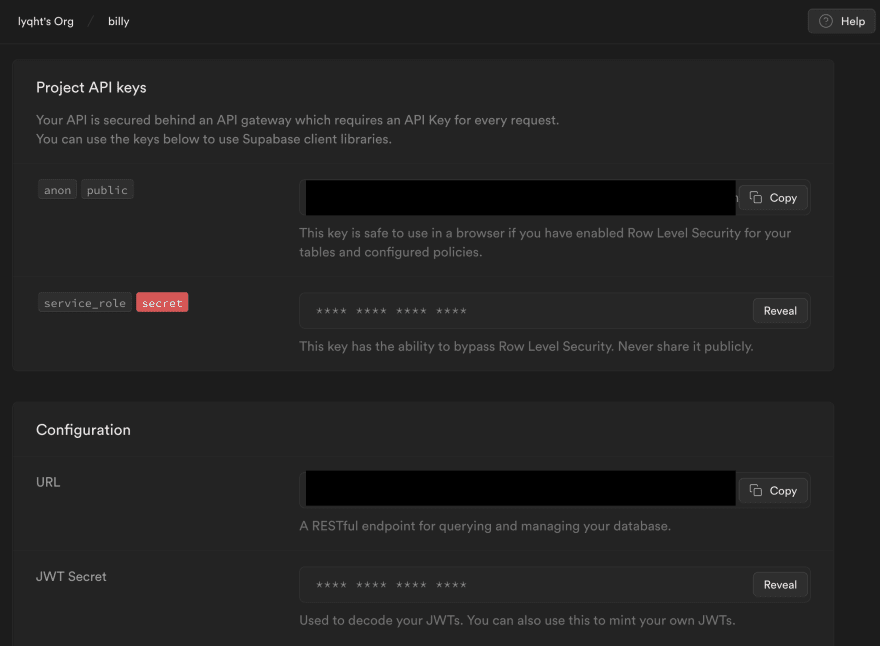 Running the script generates a file like this. With the definitions that are generated there, I could create a type for Bill with just the code block below.

Most of my project source code still works fine after changing the type. The only code I had to refactor is related to the deadline field which is Date type. The definitions has the field declared as a string, even though they do acknowledge it is a Date format.

Personally I think this is ok, since this forces you to convert date objects to appropriate ISO strings, so there is less ambiguity about passing the Date object that you have constructed in JS to Supabase. If you don’t like this you could override it in your self-declared type.

In the same documentation, they also included a section on how to update types automatically with GitHub Actions. This ensures that whenever you update the database, your GitHub action will automatically update the types that you have in your DB. Then, the next time you pull your source code, you would know what are the new changes and how to accommodate them.

In the docs, there’s a script to be added to the package.json as such.

However, I wasn’t too sure how to replace the values in the package.json script safely with environmental variables when I push the source code. I’m not very familiar with bash syntax, but I assume the script should look something like this for my project.

To double confirm the syntax, I decided to use the Sourcegraph Visual Studio Code plugin to look for projects that have implemented this GitHub action.

The Sourcegraph Visual Studio Code plugin can be installed through the Extensions panel. 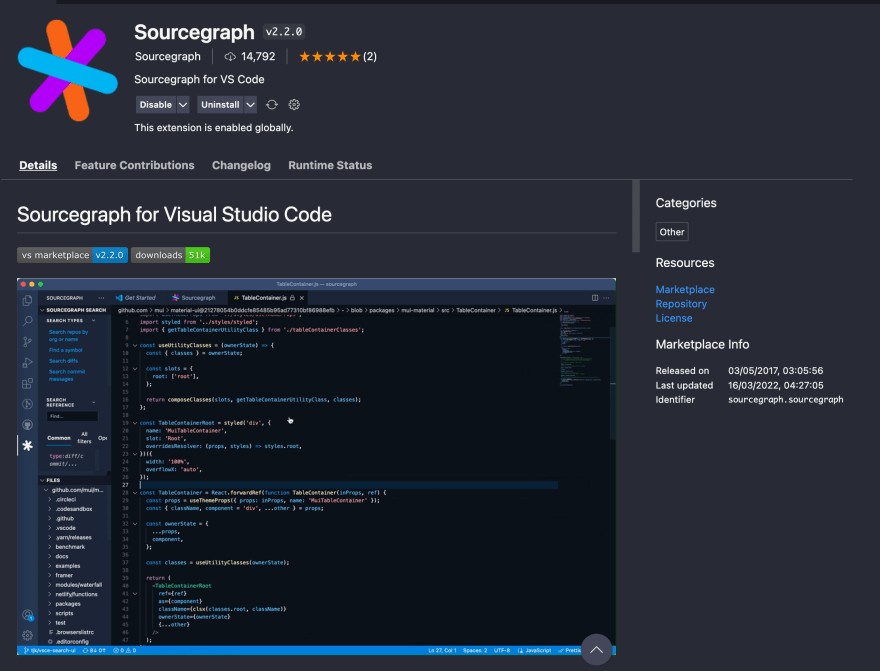 Once you have it installed, you can find the Sourcegraph icon at the side bar. When you click it, you will see the usual UI to do a universal code search. To find other projects that also generate types, we can pass in a query npx openapi-typescript.

We see quite a few results, and luckily, in the 3rd project called tone-row/flowchart-fun, I see that they have package.json script that looks like a promising candidate. They have variables such as SB_URL and SB_ANON_KEY which resemble Supabase stuff ✨

With this cross-reference and knowledge, we know that we are missing out on wrapping the whole API endpoint in a string with escape characters. Then, we can modify our previous script to match this script.

If we run this script locally via npm run update-types , we can see it generates the same output that we have done previously ✨

Out of curiosity, I also want to know if their GitHub workflow follows the same structure that was given in the example given in Supabase docs. The cool thing is with the Sourcegraph plugin, I can explore the repository in the editor itself.

Sadly, this project is not using the generate:types script that they have written in a GitHub workflow. They’re probably only running the npm script locally. Thankfully with the help of the Supabase documentation folks, at least we don’t have to write the action from scratch.

How to create the GitHub workflow

This section has been merged to Supabase documentation here after publication of this article.

If you are not familiar with GitHub action secrets, think of it as separate environment variables solely for GitHub actions. This is a screenshot of where you can add them at the settings of your GitHub project. 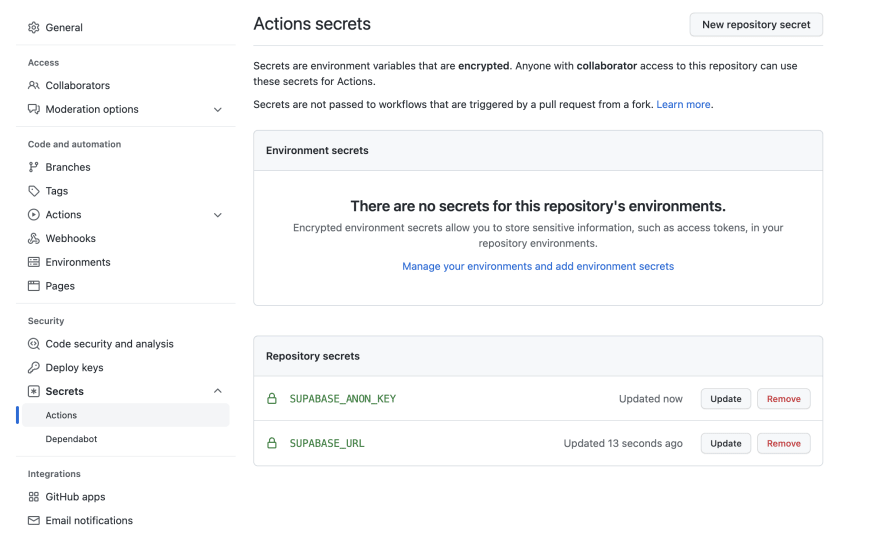 To deploy the workflow, simply push the .github/workflows folder.

Then you will see the new workflow available in the Actions tab of your GitHub project. When you click on the additional options button, you can manually dispatch the workflow.

You can also view the logs of each workflow run if you encounter any issues. For example, here in the succeeded job, I can see the src/types/supabase.ts file content that is retrieved since we logged it out as part of the steps of the workflow. 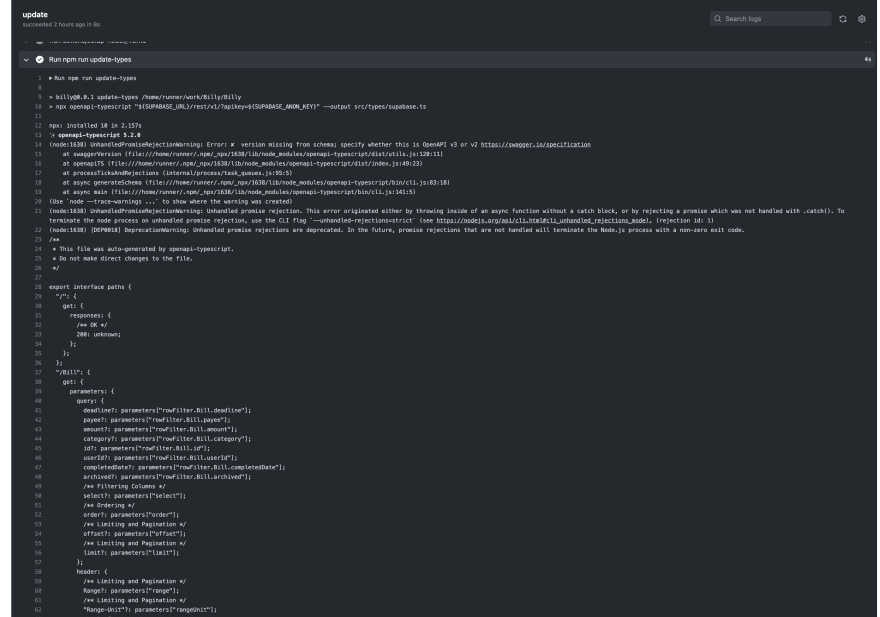 In the next section, I’ll introduce you to a handy tool that I learnt while building a custom composite GitHub action to test GitHub actions locally.

How to test GitHub Actions locally with act

act is a tool that lets you test GitHub actions locally. The benefit of this is that you get faster feedback without clogging up the GitHub Action Runner history on your project.

Refer to the GitHub repository README.md to see how to install act. You would need Docker installed too. The first time you start up act, you will be asked to choose the image that you want to create. For this GitHub Action, to test the functionality of updating the database types, the Micro image should be sufficient.

After this config is completed, you can navigate to ~/.actrc to see the config for your docker image.

Note that the Micro image does not have the full capability of a GitHub Action runner, so you will see errors related to git commands. I don’t want to explode my computer’s memory with the Large image (~20GB), but you can try if you like.

To run this workflow locally with act, we can run this bash command.

we can pass in the following parameters:

After running the bash command, here’s a simplified extract of the terminal output

If you run this, you can can see the output contains the paths portion for '/Bill' as a result of running the update-types script. This meant that it worked correctly 🎉

⚠️ Remember that these changes happen on the docker instance itself, you will not see any changes on your local folder. 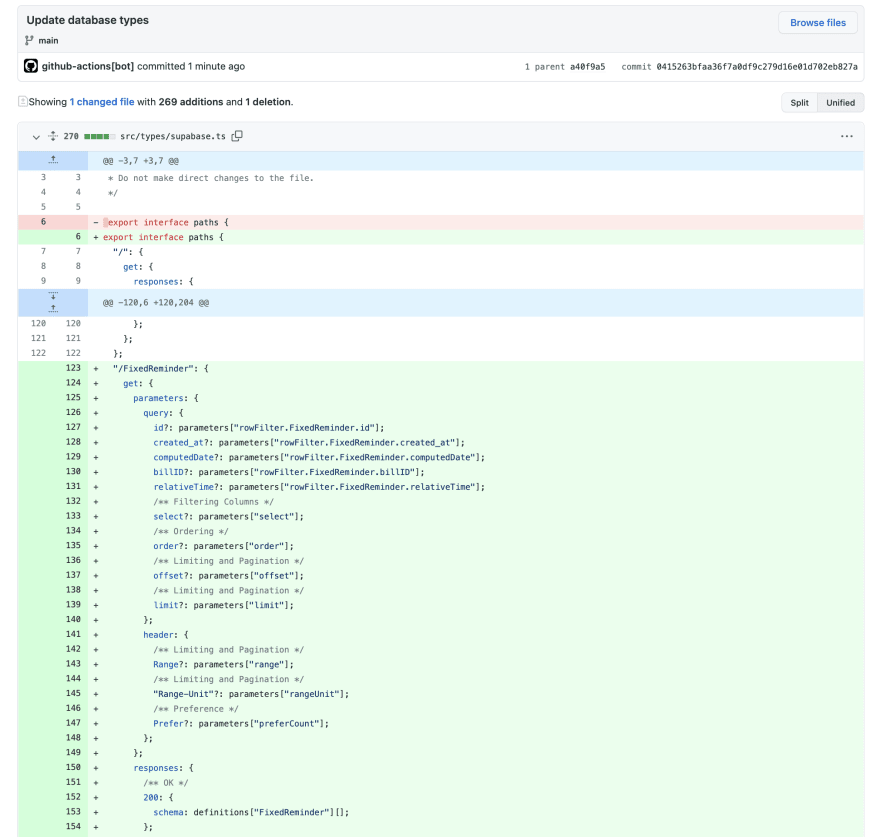 Since publishing the original article, I also created a GitHub action that does what is listed above. Check it out here!

Typescript, NextJS, Strapi, and GraphQL: An Overview Of How I Created My Blog

Estee Tey
A gamer, designer and builder. I enjoy thinking about how and why we code.
My Hacktoberfest Experience For The Third Time: 2022 Edition
#hacktoberfest #opensource #codenewbie #community
A Strange Moment.js — 3 Gotchas for Working & Testing with Datetimes
#javascript #tutorial #testing #node
How to create a CSS Playground for styling Pseudo-elements with Vanilla JavaScript
#javascript #html #css #tutorial