Why working on a side project is difficult 😓

Have you ever felt stuck on coming up with a side project idea and committing to it? That's how I felt for a very long time - even when I have been working as a software developer for a whole year after I graduated 😵.

Work is often a pain point for many of us working as developers that saps our energy for the day. After work, we still have to fulfill our responsibilities for other commitments, such as financial planning, socializing with friends, or even parenting. I'm fortunate enough that for now as a young adult, I still have relatively a large amount of free time after work, so I can spend that time to read, write and play online games like DOTA with my friends. But still, finding a side project that clicks has been very difficult for me.

While there are plenty of compilation list of project ideas online, I didn't feel motivated to go through them. Instead, I only felt compelled to go into tutorial hell to improve my technical skills before trying out something. The tutorials I have went through did help me learn new stuff, but eventually, a devil at the back of my mind would whisper to me that I'm not helping anyone by creating another clone app or imaginary e-commerce app. A cycle of self-blaming for procrastinating and spiritual fatigue would then begin🤣.

Have you felt like this before? If you currently feel like this, I want you to believe that it won't always be doom and gloom. There will be light at the end of the tunnel. 🧡

In this article, I will share with you my story and 3 easy steps to work on your next side project:

A spark of an idea 💡

One day, my bf was making casual complaints about the tediousness of his PhD work where he mentioned an interesting problem that I thought could be solved simply through better technology. The issues he mentioned were:

So I thought of a general idea:

But I wasn't sure if this idea can be pulled off on a web app, so I decided to create a Proof of Concept first.

Crafting a Proof of Concept (POC)

First, I did a spike on how to view pdf on a web application since I had no prior experience on this. I was also keen to make the web application using the React framework, so I looked for react-specific packages.

Luckily, there is such a package called react-pdf and their online demo looks promising. So I cloned their repo and tried playing around with their webpack5 sample repository. 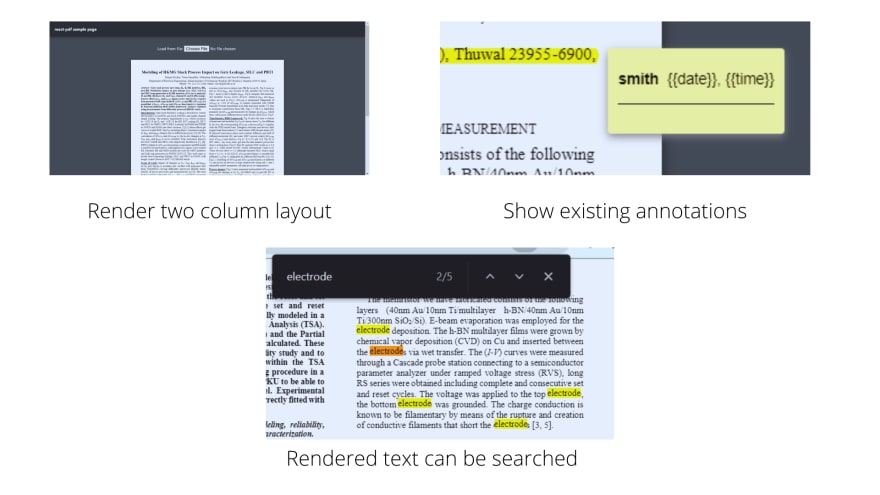 👍 While experimenting, I also submitted a simple PR to fix a critical warning for conflict in node environment variable and got it merged. Yay, I'm already in Hacktoberfest mode!

Next, based on my learnings from an advanced demo using Tippy.js, I wanted to know if I can still get the content of the user's selected text from the rendered pdf. To my pleasant surprise, it can!

Using the Browser Inspector to investigate, it seems that the rendered PDF text are all just <span /> elements. Interestingly, for the portion above that I've selected which spans across 2 lines, it is somehow chopped into 5 different <span /> elements. I wonder why this is the case 🤔

Next, I imported the popper.js react wrapper package instead of tipper.js, because this time, I want the pop up to stay even when the user moves out of the selected text. The configuration is rather similar to make it work like the Tippy.js demo that I did before.

I won't be going in-depth for the code since this is just a PoC, but I will write an article and share the github repository next time when I finish a more completed product 🤗

The basic PoC looks pretty promising so far 🎉 - we are able to view pdf on a web application and show a pop up with a button for users to click to save notes. So I decided to do a user interview to revisit the problem and get some feedback on the PoC. My bf actually doesn't know I was working on a PoC for it before 😄

Here's the voice recording of the user interview that I did. I am not able to show the video as many of the papers he showed in the interview are restricted research work 😜

After the recorded portion, I also showed him the PoC that I did, and asked for his feedback on how he would like to find and see the saved note snippets.

This article is getting long, so I've taken out the translation of my thought process into actual requirements into another article. Look out for that if you are keen in UX stuff too 🧡

In a nutshell, the user interview helped me to prioritize the next steps that I should work on:

To end off this article, here's a cute motivational penguin from chibird.

Estee Tey
A gamer, designer and builder. I enjoy thinking about how and why we code.
How to create and test a GitHub Action that generates Supabase database types
#javascript #opensource #github #tutorial
A Strange Moment.js — 3 Gotchas for Working & Testing with Datetimes
#javascript #tutorial #testing #node
How to create a CSS Playground for styling Pseudo-elements with Vanilla JavaScript
#javascript #html #css #tutorial