Ever had to deal with JS code that just... didn't run the way you expected it to? Maybe it seemed like functions got executed at random, unpredictable times, or the execution got delayed. There's a chance you were dealing with a cool new feature that ES6 introduced: Promises!

My curiosity from many years ago has paid off and my sleepless nights have once again given me the time to make some animations. Time to talk about Promises: why would you use them, how do they work "under the hood", and how can we write them in the most modern way?

If you haven't read my previous post on the JavaScript Event Loop yet, it may be useful to read that first! I'll be covering the event loop again assuming some basic knowledge about the call stack, Web API and the queue, but this time we'll also be covering some exciting extra features 🤩 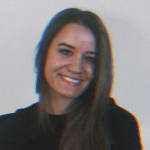 If you're already somewhat familiar with promises, here are some shortcuts to save you some precious scrolling time.

When writing JavaScript, we often have to deal with tasks that rely on other tasks! Let's say that we want to get an image, compress it, apply a filter, and save it 📸

In the end, we'll end up with something like this: 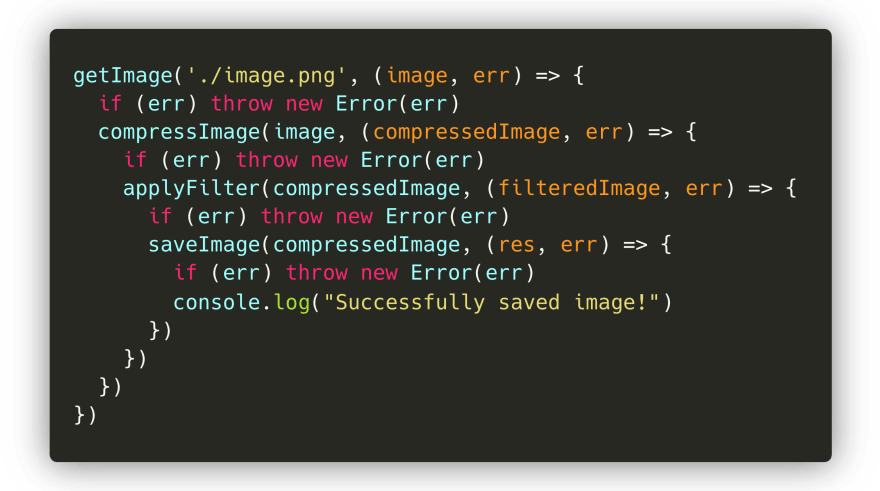 Luckily, we now got something called promises to help us out! Let's take a look at what promises are, and how they can help us in situations like these! 😃

ES6 introduced Promises. In many tutorials, you'll read something like:

Yeah... That explanation never made things clearer for me. In fact it only made me feel like a Promise was a weird, vague, unpredictable piece of magic. So let's look at what promises really are.

We can create a promise, using a Promise constructor that receives a callback. Okay cool, let's try it out!

Wait woah, what just got returned?

Don't worry - you'll never have to interact with this object, you can't even access the [[PromiseStatus]] and [[PromiseValue]] properties! However, the values of these properties are important when working with promises.

The value of the PromiseStatus, the state, can be one of three values:

Alright this all sounds great, but when is a promise status "pending", "fulfilled" or "rejected"? And why does that status even matter? 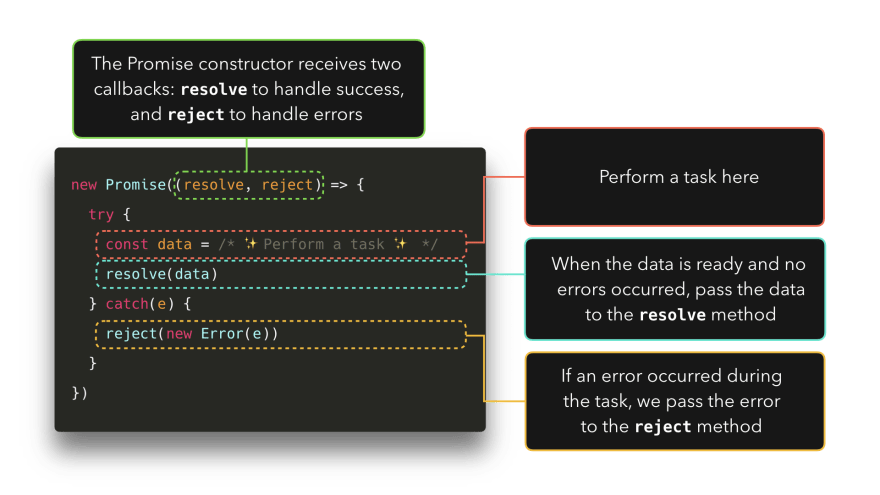 The value of a promise, the value of [[PromiseValue]], is the value that we pass to the either the resolved or rejected method as their argument.

Fun fact, I let Jake Archibald proofread this article and he actually pointed out there's a bug in Chrome that currently shows the status as "resolved" instead of "fulfilled". Thanks to Mathias Bynens it's now fixed in Canary! 🥳🕺🏼

Chrome and Safari call this a "resolved" promise, which is true, but kinda misleading…

Okay so, now we know a little bit better how to control that vague Promise object. But what is it used for?

In the introductory section, I showed an example in which we get an image, compress it, apply a filer, and save it! Eventually, this ended up being a nested callback mess.

Luckily, Promises can help us fix this! First, let's rewrite the entire code block, so that each function returns a Promise instead. 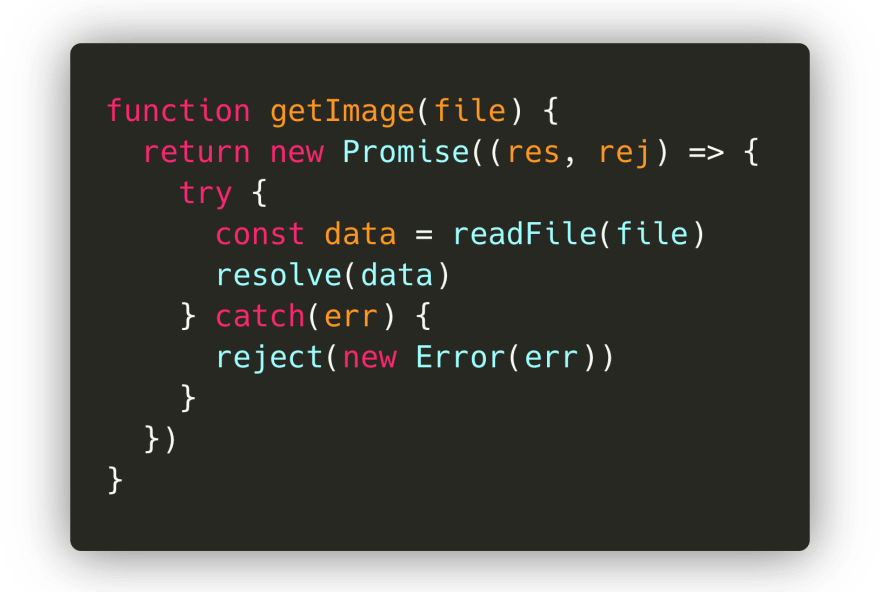 Let's see what happens when we run this in the terminal!

Cool! A promise got returned with the value of the parsed data, just like we expected.

But... what now? We don't care about that entire promise object, we only care about the value of the data! Luckily, there are built-in methods to get a promise's value. To a promise, we can attach 3 methods:

The .then method receives the value passed to the resolve method.

The .catch method receives the value passed to the rejected method

Finally, we have the value that got resolved by the promise without having that entire promise object! We can now do whatever we want with this value.

FYI, when you know that a promise will always resolve or always reject, you can write Promise.resolve or Promise.reject , with the value you want to reject or resolve the promise with! 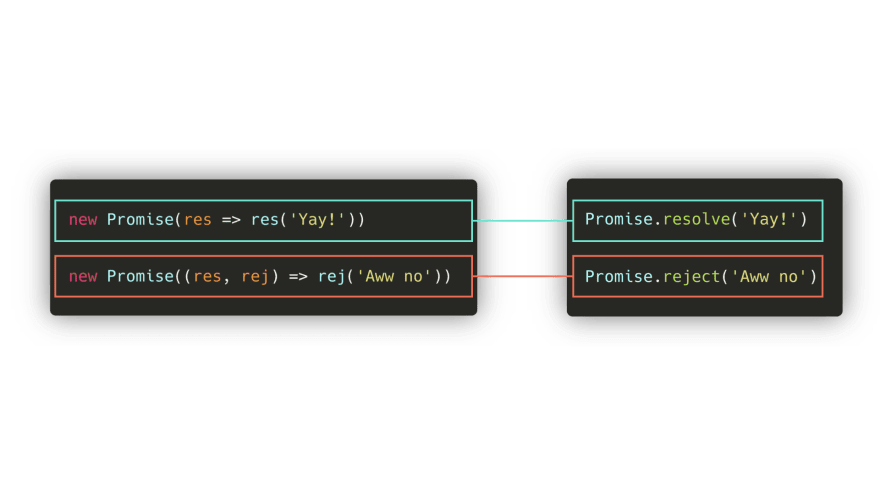 You'll often see this syntax in the following examples 😄

In the getImage example, we ended up having to nest multiple callbacks in order to run them. Luckily, the .then handlers can help us with that! 🥳 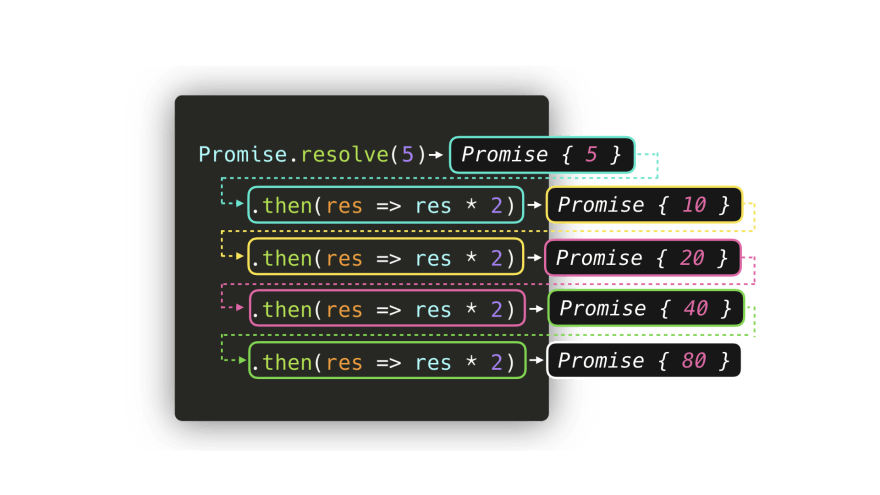 In the case of the getImage example, we can chain multiple then callbacks in order to pass the processed image onto the next function! Instead of ending up with many nested callbacks, we get a clean then chain.

Okay so we know a little better how to create a promise and how to extract values out of a promise. Let's add some more code to the script, and run it again:

First, Start! got logged. Okay we could've seen that one coming: console.log('Start!') is on the very first line! However, the second value that got logged was End!, and not the value of the resolved promise! Only after End! was logged, the value of the promise got logged. What's going on here?

We've finally seen the true power of promises! 🚀 Although JavaScript is single-threaded, we can add asynchronous behavior using a Promise!

But wait, haven't we seen that before? 🤔 In the JavaScript event loop, can't we also use methods native to the browser such as setTimeout to create some sort of asynchronous behavior?

So what's a (macro)task and what's a microtask? Although there are a few more than I'll cover here, the most common are shown in the table below!

Ahh, we see Promise in the microtask list! 😃 When a Promise resolves and calls its then(), catch() or finally(), method, the callback within the method gets added to the microtask queue! This means that the callback within the then(), catch() or finally() method isn't executed immediately, essentially adding some async behavior to our JavaScript code!

So when is a then(), catch() or finally() callback executed? The event loop gives a different priority to the tasks:

Let's take a look at a quick example, simply using:

Okay okay enough pink boxes. Let's use it with some real code! 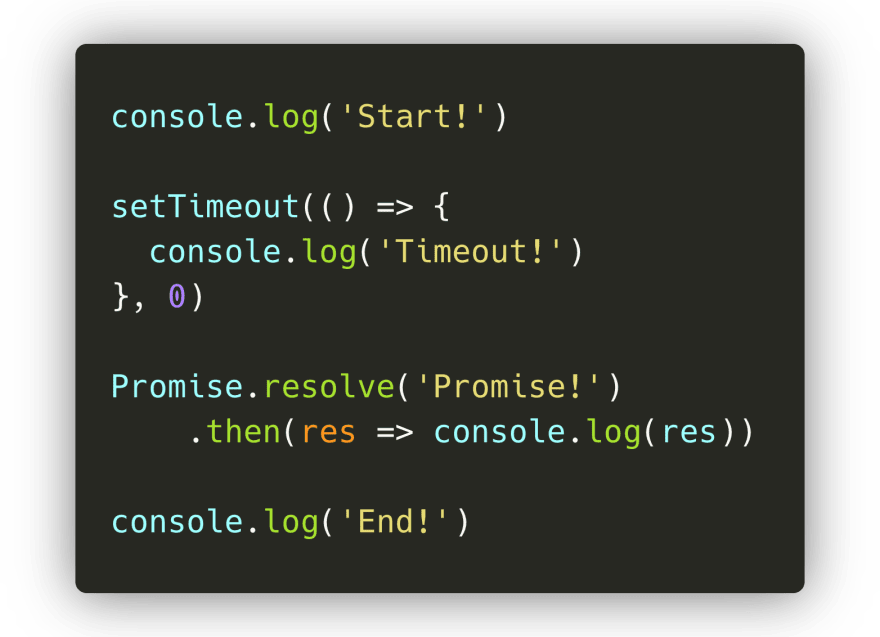 In this code, we have the macro task setTimeout, and the microtask promise then() callback. Once the engine reaches the line of the setTimeout function. Let's run this code step-by-step, and see what gets logged!

Quick FYI - in the following examples I'm showing methods like console.log, setTimeout and Promise.resolve being added to the call stack. They're internal methods and actually don't appear in stack traces - so don't worry if you're using the debugger and you don't see them anywhere! It just makes explaining this concept easier without adding a bunch of boilerplate code 🙂

The engine sees the callstack is empty now. Since the call stack is empty, it's going to check whether there are queued tasks in the microtask queue! And yes there are, the promise then callback is waiting for its turn! It gets popped onto the call stack, after which it logs the resolved value of the promise: the string Promise!in this case.

Finally, all done! 🥳 It seems like the output we saw earlier wasn't so unexpected after all.

ES7 introduced a new way to add async behavior in JavaScript and make working with promises easier! With the introduction of the async and await keywords, we can create async functions which implicitly return a promise. But.. how can we do that? 😮

Previously, we saw that we can explicitly create promises using the Promise object, whether it was by typing new Promise(() => {}), Promise.resolve, or Promise.reject.

Instead of explicitly using the Promise object, we can now create asynchronous functions that implicitly return an object! This means that we no longer have to write any Promise object ourselves. 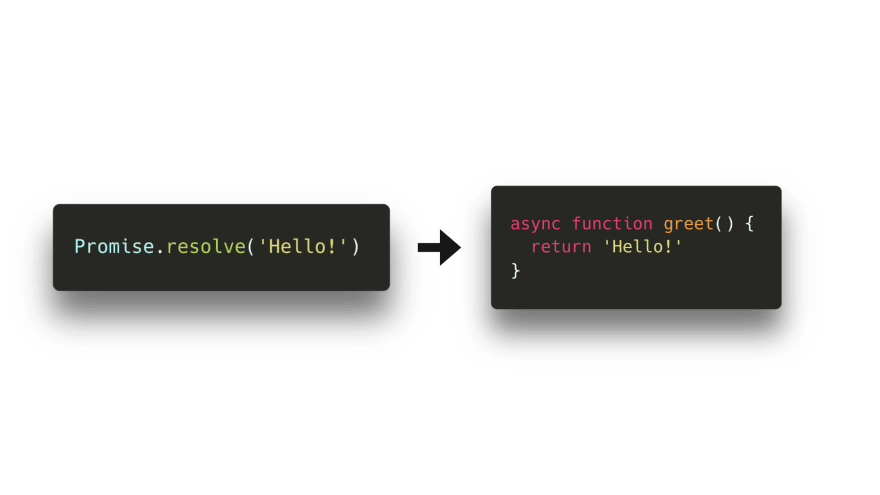 Although the fact that async functions implicitly return promises is pretty great, the real power of async functions can be seen when using the await keyword! With the await keyword, we can suspend the asynchronous function while we wait for the awaited value return a resolved promise. If we want to get the value of this resolved promise, like we previously did with the then() callback, we can assign variables to the awaited promise value!

So, we can suspend an async function? Okay great but.. what does that even mean?

Let's see what happens when we run the following block of code:

First, the engine encounters a console.log. It gets popped onto the call stack, after which Before function! gets logged.

Then, we invoke the async function myFunc(), after which the function body of myFunc runs. On the very first line within the function body, we call another console.log, this time with the string In function!. The console.log gets added to the call stack, logs the value, and gets popped off.

The function body keeps on being executed, which gets us to the second line. Finally, we see an await keyword! 🎉

The first thing that happens is that the value that gets awaited gets executed: the function one in this case. It gets popped onto the call stack, and eventually returns a resolved promise. Once the promise has resolved and one returned a value, the engine encounters the await keyword.

Finally, there are no more tasks to run in the global execution context! The event loop checks to see if there are any microtasks queued up: and there are! The async myFunc function is queued up after resolving the valued of one. myFunc gets popped back onto the call stack, and continues running where it previously left off.

The variable res finally gets its value, namely the value of the resolved promise that one returned! We invoke console.log with the value of res: the string One! in this case. One! gets logged to the console and gets popped off the call stack! 😊

Finally, all done! Did you notice how async functions are different compared to a promise then? The await keyword suspends the async function, whereas the Promise body would've kept on being executed if we would've used then!

Hm that was quite a lot of information! 🤯 No worries at all if you still feel a bit overwhelmed when working with Promises, I personally feel that it just takes experience to notice patterns and feel confident when working with asynchronous JavaScript.

However, I hope that the "unexpected" or "unpredictable" behavior that you might encounter when working with async JavaScript makes a bit more sense now!

And as always, feel free to reach out to me! 😊

If you want to know more about promises states (and fates!), this Github repo does an excellent job explaining the differences.

The ES6 promises spec, as per September 2013 TC39 meeting

10 useful HTML5 features, you may not be using