Some non-functional requirements from our applications are about performance and scalability. Then, we start thinking about a lot of strategies: review architecture, refactor features and algorithms, apply some caching strategy, etc.

Yeah! That’s it! All this in one solution. :D

If you want to know more about Apache Ignite, take a look at its documentation. Beyond .NET, there are samples for other programming languages as well.

This article will be split into two parts. In this first one, I will present the basic steps to work with the Cache feature and check results from a small test with that. In the second part, let’s see how can we work with SQL API feature in .NET applications.

For this test, I used the machine settings below:

Then, run the following command to start the Apache Ignite container:

We can persist the data that will be used in the sections below in memory or on disk. For this article, the is being persisted in memory.

After running the command above, you should see the screen below:

Check if there are error messages when the Apache Ignite container has been started. If everything is OK, let’s test its Cache feature in the sections below.

The steps to use Apache Ignite are very simple. You can follow the items below to allow your application to connect with Apache Ignite.

Done! Now your application can perform operations in a cache repository from Apache Ignite. I recommend checking the Apache Ignite documentation to know more about available methods.

Now that we have an Apache Ignite cluster ready and the application set up appropriately, let’s test its cache feature.

Basically, one Order can have one or more OrderItem associated with it. Then, the next step is to generate as many Order instances as possible, adding and getting them to the cache, and finally check the performance with some counters.

The code below inserts 1 million Orders in the cache repository and checks its performance for “ICacheClient.Put” and “ICacheClient.TryGET” methods. As an attempt to create a small “workload” against the Apache Ignite container, those operations are executed with Parallel Task.

As we can see in the code above, some KPIs were created to check the performance of each operation against Apache Ignite Cache:

After running the application test, the metrics below were collected: 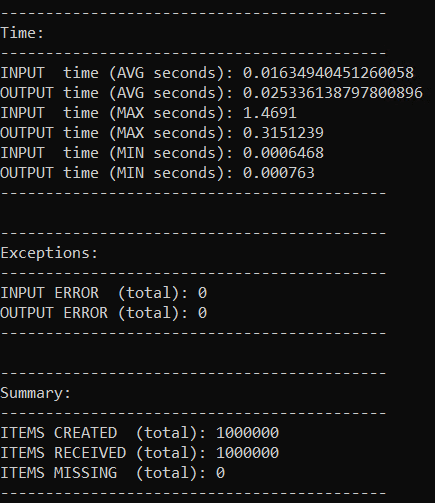 In general, the Apache Ignite presented a nice performance adding and getting objects. The average time to add items in the cache was 0.016 seconds and 0.025 seconds to get those items from the cache. Also, there were no exceptions and lost items in this test.

Checking the Apache Ignite container, the memory consumption increase by about 390 MB, which represents about 130% more than its initial state:

For now, that’s all. In the second part, let's see how can we implement the SQL API feature in our .NET applications. From a development perspective, I think that this feature from Apache Ignite is the most interesting so far.

I hope that this can be helpful for you!