In week 2 we took a look at memory and how we could use arrays to store data. Now, in week 4, David Malan goes a bit deeper into memory management, introducing us to memory addresses, pointers, and memory allocation, among other low-level and interesting things.

If you remember, Memory RAM is like a huge grid where information is stored as 0's and 1's. Each square of the grid has an address used by the computer when reading and writing information into it. These addresses are described using the hexadecimal system.

The hexadecimal system is a much more concise way to express data. It is easier for a person to remember the number 72 to refer to the letter H, instead of the equivalent in binary 01001000. The same thing happens with memory addresses, it is easier to read 0x5FA3F than its equivalent in decimal system 391743 or in binary 1011111101000111111. The values in a computer’s memory are still stored as binary, but hexadecimal helps us, humans, represent larger numeric values with fewer digits needed.

Hexadecimal system, or base-16, is formed by 16 digits:

The digits start with 0 through 9, and continue with A through F as equivalents to the decimal values of 10 through 15. After F, we need to carry the one, as we would go from 01 to 10 in binary:

With two digits, we can have a maximum value of FF, or (remember that F is 15 in the decimal system):

When we create a variable in our program, it is stored at some memory location. That memory location has an address, which is described using hexadecimal. 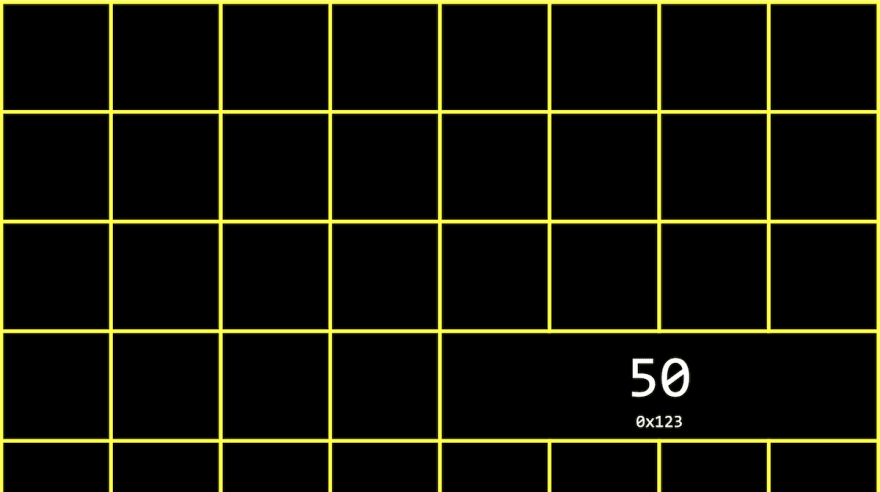 In our computer’s memory, there are now 4 bytes (remember that an int takes 4 bytes in memory) somewhere that has the value of 50, with some value for its address, like 0x123.

By writing 0x in front of a hexadecimal value, we can distinguish them from decimal values.

A reference to that address in memory can be stored in another variable, which is better known as a pointer. So, a pointer is a variable that stores a memory address, where some other variable might be stored, the specific byte in which that value is stored.

Also, pointers provide a way to pass data by reference between functions. By default, C passes data by value, which means it only passes a copy of that data. Using pointers we can pass a reference to work with the original data.

In C we can declare a pointer using the * star operator. Also, we can use the & address operator to get the memory address of some variable.

We can run this program a few times and see that the address of n changes because different addresses in memory will be available at different times.

The * operator is also used as the dereference operator, which goes to an address to get the value stored there:

The value of a memory address in itself is not significant, since it’s just some location in memory where a variable is stored; but it is a significant idea to use with strings.

Each character has its own memory address, and s is actually just a pointer containing the address of the first character of the string:

Recall that we can read the entire string by starting at the address in s, and continue reading one character at a time from memory until we reach the NUL character \0.

As we can see in the following example, the address of the first character, &s[0], is the same as the value of s:

Again, the address of the first character, &s[0], is the same as the value of s. And each following character has an address that is one byte higher:

Because each string is just a pointer to a different location in memory, if we compare two strings containing the same text, they will be different, because we are comparing the addresses where they are stored and not the text. 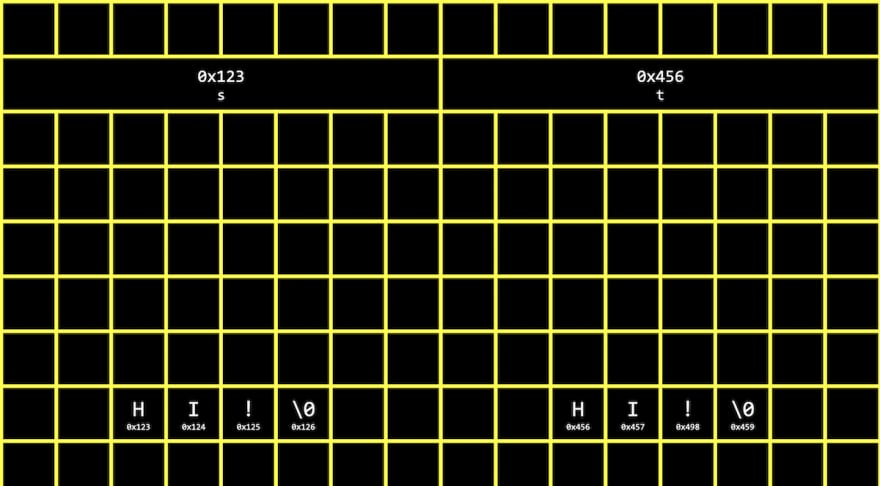 If we now copy the string into another variable we will see that any change made to the copy will affect also the original string:

The concept is the same as with the compare situation, in this case both, variables point to the same address in memory where the string “hi!” is stored.

For both compare and copy operations with strings, the process is similar: loop over the string and compare or copy character by character. Also, you can use the methods strcmp() and strcpy() from the C library string.h created for this purpose. But we will see that in detail below.

To make a copy of a string, we have to do a little more work, first, we need a free block of memory that acts like an “empty string”, where to copy the characters. To get a free block of memory there’s a function called malloc which allocates **dynamically some number of bytes in memory for our program to use. Once we´re done with the allocated memory, there’s another function called free to give back again the memory to the operating system, so it can do something else with it.

Our computers might slow down if a program we’re running never frees allocated memory. The operating system will take longer and longer to find enough available memory for our program.

If the computer is out of memory, malloc will return NULL, a special value of all 0 bits that indicates there isn’t an address to point to. So we’re checking for that case in our example, and exit if t is NULL.

Now both s and t point to a different memory location where hi! and Hi! are stored.

We must be careful when allocating memory with malloc, if we don’t initialize our variables, we will end up getting what is known as garbage values, random data that were in the block of memory that the system gave us. And if we try to go to an address that’s a garbage value, our program is likely to crash from a segmentation fault error.

Next, we are going a bit deeper into how memory works.

So far we’ve been talking about memory imagining it is like a huge grid, where magically the computer stores and retrieves data. Going deeper about how memory works, different types of data that need to be stored for our program are organized into different sections: 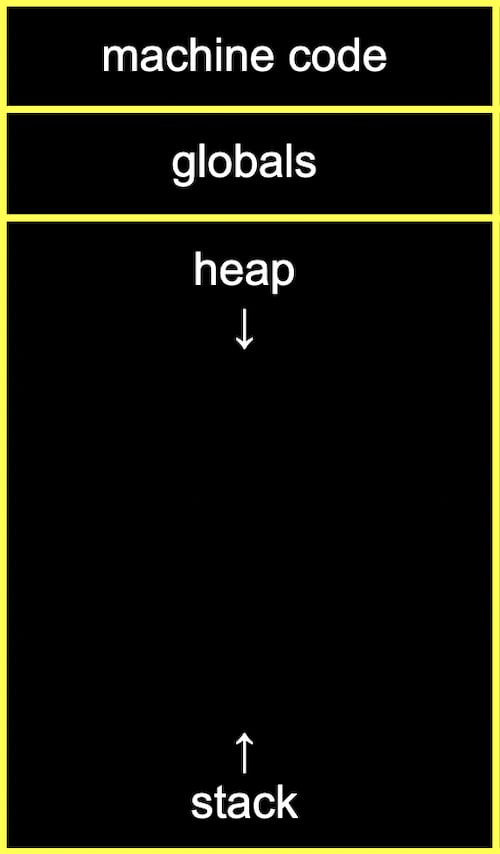 The machine code section is our compiled program’s binary code. When we run our program, that code is loaded into memory.

Just below, or in the next part of memory, are global variables we declared in our program.

The heap section is an empty area from where malloc can get free memory for our program to use. As we call malloc, we start allocating memory from the top down.

The stack section is used by functions and local variables in our program as they are called and grow upwards.

If we call malloc for too much memory, we will have a heap overflow, since we end up going past our heap. The three golden rules of memory allocation are:

On the other hand, if we call too many functions without returning from them, we will have a stack overflow, where our stack has too much memory allocated as well.

But, why could we call too many functions without returning from them? Maybe for a bug in a recursive function.

The call stack is the flow that C uses to work. When you call a function, the system sets aside space in memory for that function to do its work. Those chunks in memory are known as stack frames or function frames.

More than one function’s stack frame may exist in memory at a given time, for example, we have a main() function which calls to move() function, which also calls to direction() function. All of them are in memory, but just one function is active doing its work.

Frames are arranged in a stack. A stack is a linear data structure that follows LIFO (Last In First Out) as the order in which the operations are performed. The frame for the most recently called function is always on top of the stack and is the active frame. When a function finishes its work, its frame is popped off the stack and the frame immediately below becomes the active frame, which continues doing its work where it left off.

This is how recursion works. But maybe it is better to explain it with the example of the factorial calculation:


I think it is great to know how memory works in general, and how programming languages manage it to do its work. I hope you found it interesting too. It is a topic that recruiters may ask when you’re in an interview, so better have a notion about it.

In the next post: data structures 😃, a must if you wanna be a good developer.

20 Awesome Websites You Didn't Know About

Thanks for keeping DEV Community safe. Here is what you can do to flag luciano_dev: