Modern voice applications use AI algorithms to recognize different sounds, including human voice and speech. In technical terms, most of the voice apps perform either voice recognition or speech recognition. And while there is no big difference between the architecture and AI models that perform voice/speech recognition, they actually relate to different business tasks. So first of all, let us elaborate on the difference between them.

Voice recognition is the ability to single out specific voices from other sounds, and identify the owner’s tone to implement security features like voice biometrics.

Speech recognition is mostly responsible for extracting meaningful information from the audio, recognizing the words said, and the context they are placed in. With this we can create systems like chatbots and virtual assistants for automated communication and precise understanding of voice commands.

Both terms can often be used interchangeably, because there is not much technical difference between the algorithms that perform these functions. Although, depending on what you need, the pipeline for voice or speech recognition may be different in terms of processing steps.

In this post, we’ll focus on the general approach for speech recognition applications, and elaborate on some of the architectural principles we can apply to cover all of the possible functional requirements.

How do speech recognition applications work?

Speech recognition covers the large sphere of business applications ranging from voice-driven user interfaces to virtual assistants like Alexa or Siri. Any speech recognition solution is based on the Automatic Speech Recognition (ASR) technology that extracts words and grammatical constructions from the audio, to process it and provide some type of system response.

WHICH TYPE OF AI IS USED IN SPEECH RECOGNITION?

Speech recognition models can react to speech directly as an activation signal for any type of action. But since we’re speaking about speech recognition, it is important to note that AI doesn’t extract meaningful information right from the audio, because there are many odd sounds in it. This is where speech-to-text conversion is done as an obligatory component to further apply Natural Language Processing or NLP.

So the top-level scope of a speech recognition application can be represented as follows: the user’s speech provides input to the AI ​​algorithm, which helps to find the appropriate answer for the user.

However, it is important to note that the model that converts speech to text for further processing is the most obvious component of the entire AI pipeline. Besides the conversion model, there will be numerous components that ensure proper system performance.

So approaching the speech recognition system development, first you must decide on the scope of the desired application:

WHAT IS IMPORTANT FOR SPEECH RECOGNITION TECHNOLOGY?

When starting speech recognition system development, there are a number of basic audio properties we need to consider from the start:

The most important ones are audio file format and sample rate, so let’s speak of them in detail. Input devices record audio in different file formats, and most often audio is saved in loosy mp3, but there can also be lossless formats like WAV or Flac. Whenever we record a sound wave, we basically digitize the sound by sampling it in discrete intervals. This is what’s called a sample rate, where each sample is an amplitude of a waveform in a particular duration of time. 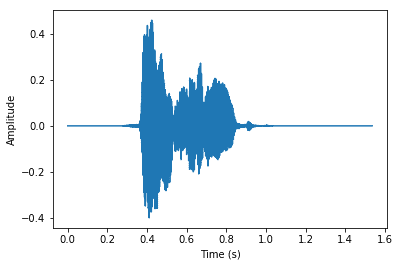 Some models are tolerant to format changes and sample rate variety, while others can intake only a fixed number of formats. In order to minimize this kind of inconsistency, we can use various built-in methods for working with audio in each programming language. For example, if we are talking about the Python language, then various operations such as reading, transforming, and recording audio can be performed using the libraries like Librosa, scipy.io.wavfile and others.

Once we get the specifics of audio processing, this will bring us to a more solid understanding of what data we’ll need, and how much effort it will take to process it. At this stage, consultancy services from a data science team experienced in ASR and NLP is highly recommended. Since gathering wrong data and or setting unrealistic objectives are the biggest risks in the beginning.

In this way, we can derive the following pipeline design which will include multiple modules just to fetch the correct data and process it. 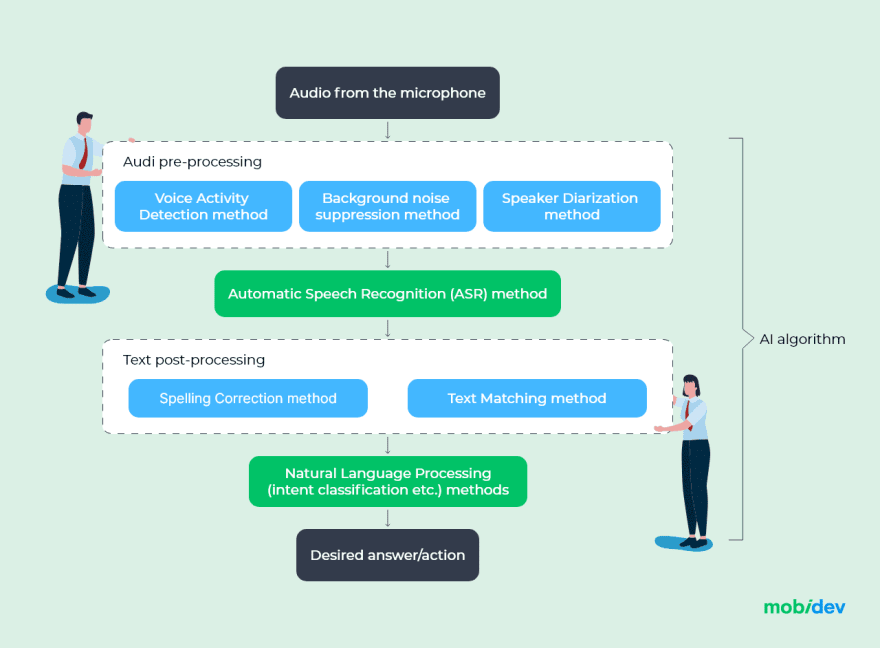 Throughout the AI pipeline, there are blocks that are used by default: ASR and NLP methods (for example, intent classification models). Essentially, the AI algorithm takes sound as an input, converts it to speech using ASR models, and chooses a response for the user using a pre-trained NLP model. However, for a qualitative result, such stages as pre-processing and post-processing are necessary.

Our 4 recommendations for improving quality of ASR

To optimize the planning of the development and mitigate the risks before you get into trouble, it is better to know of the existing problems within the standard approaches in advance. MobiDev ran an explicit test of the standard pipeline, so in this section will share some of the insights found that need to be considered.

As we’ve mentioned before, audio has characteristics such as sample rate, number of channels, etc. These can significantly affect the result of voice recognition and overall operation of the ASR model. In order to get the best possible results, we should consider that most of the pre-trained models were trained on datasets with 16Hz samples and only one channel, or in other words, mono audio.

This brings with it some constraints on what data we can take for processing, and adds requirements to the data preparation stages.

Obviously, ASR methods are sensitive to audio containing a lot of extraneous noise, and suffer when trying to recognize atypical accents. But what’s more important, speech recognition results will strongly depend on the sound volume. Sound recordings can often be inconsistent in volume due to the distance from the microphone, noise suppression effects, and natural volume fluctuations in speech. In order to avoid such inaccuracies, we can use the Pyloudnorm library from the Python language that helps to determine the sound volume range and amplify the sound without any distortion. This method is very similar to audio compression, but brings less artifacts, improving the overall quality of the model’s predictions.

Here you can see an example of voice recognition without volume normalization, and also with it. In the first case, the model struggled to recognize a simple word, but after volume was restored, the results improved.

The majority of ASR models were trained on datasets that contain texts with proper semantic relations between each sentence. This brings us to another problem with recognizing short phrases taken out of context. Below is a comparison of the performance of the ASR model on short words taken out of context and on a full sentence:

The result of recognizing short words in and out of context

In order to overcome this problem, it is necessary to think about the use of any preprocessing methods that allow the model to understand in which particular area a person wants to receive information more accurately.

Additionally, ASR models can generate non-existing words and other specific mistakes during the text to speech conversion. Spell correction methods may simply fail in the best cases, or choose to correct the word to one that is close to the right choice, or even change to a completely wrong one. This problem also applies to very short words taken out of context, but it should be foreseen in advance.

Background noise suppression methods can greatly help to separate a user’s speech from the surrounding sounds. However, once loud noise is present, noise suppression can lead to another problem, such as incorrect operation of the ASR model.

Human speech tends to change in volume depending on the part of the sentence. For example, when we speak we would naturally lower our voice at the end of the sentence, which leads to the voice blending with other sounds and being drowned out by the noise suppression. This results in the ASR model not being able to recognize a part of the message. Below you can see an example of noise suppression affecting only a part of a user’s speech. 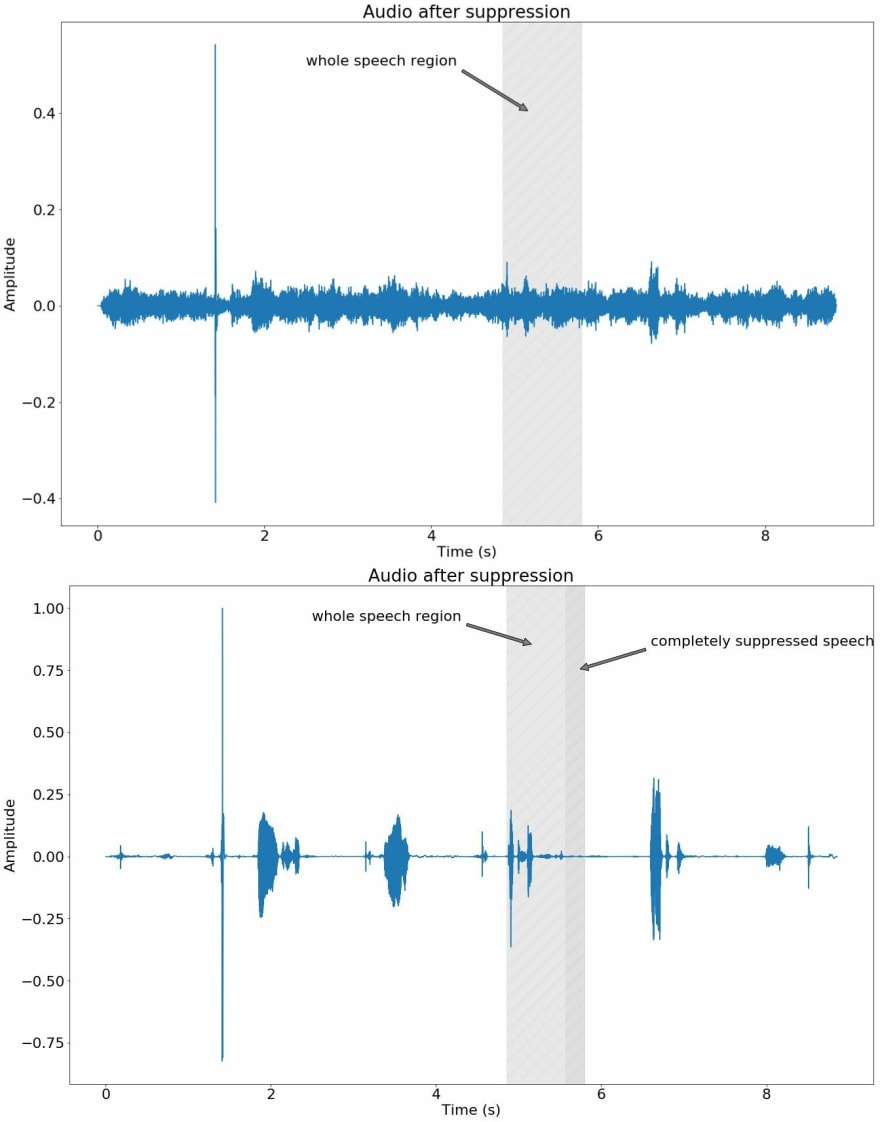 Get the enhanced ASR system

Based on the mentioned points, the initial pipeline can bring more trouble with it than actual performance benefits. This is because some of the components that seem logical and obligatory may interrupt the work of other essential components. In other cases, there is a strict need to add layers of preprocessing before the actual AI model can interact with data. We can therefore come up with the following enhanced ASR system architecture: 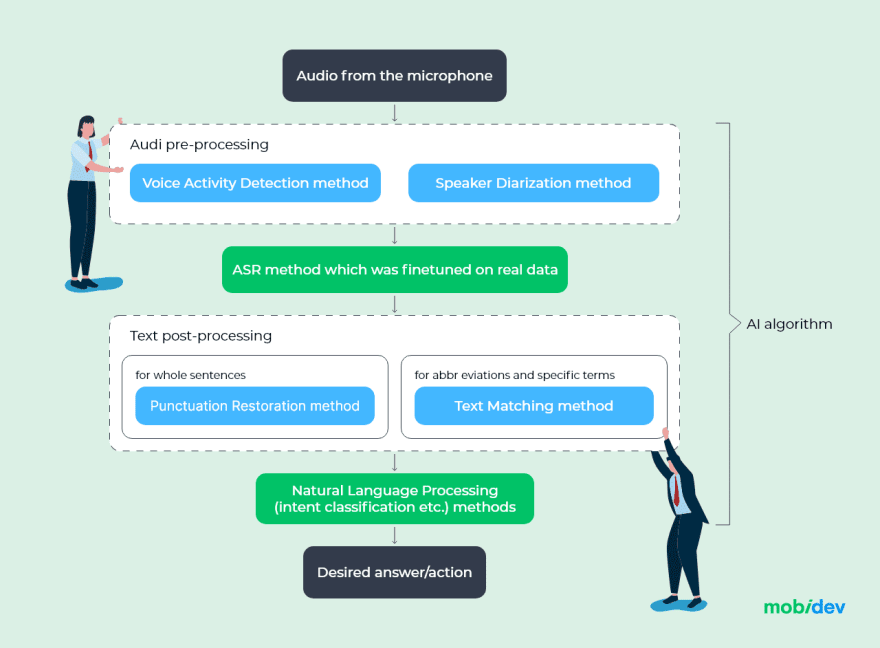 That is why, based on the above points, noise suppression and spelling correction modules were removed. Instead, to solve the problem of removing noise and getting rid of errors in the recognized text, the ASR model has to be fine-tuned on the real data. This data will fully reflect the actual environmental conditions and features of the domain area.

How to NOT overfit in Deep Learning

Who will win the AI chatbot wars: Sparrow or ChatGPT?

Your own AI knowledge base chatbot with OpenAI without Fine-Tuning

Once suspended, liubovzatolokina2022 will not be able to comment or publish posts until their suspension is removed.

Once unsuspended, liubovzatolokina2022 will be able to comment and publish posts again.

Once unpublished, all posts by liubovzatolokina2022 will become hidden and only accessible to themselves.

If liubovzatolokina2022 is not suspended, they can still re-publish their posts from their dashboard.

Once unpublished, this post will become invisible to the public and only accessible to Liubov Zatolokina.

Thanks for keeping DEV Community 👩‍💻👨‍💻 safe. Here is what you can do to flag liubovzatolokina2022:

Unflagging liubovzatolokina2022 will restore default visibility to their posts.