Jumping feet-first into an immersive Data Science bootcamp is not a decision I made lightly. Sure, there are a lot of reasons for people to move into data science as a field right now - data-related competencies and skills are some of the most sought-after by employers in the United States - but that didn’t automatically mean that data science would be the right move for me. And would the results be worth the substantial investment of money and time?

There were a lot of contributing factors and considerations that led me to answer 'yes' and take this plunge, but three of the most relevant are personal traits which, I hope, will ultimately make me into a successful and effective data scientist.

Anyone who has ever worked with me will tell you that I’m quick to question pretty much everything. What is the purpose of what I’m doing? How can what I’m doing be improved? Is what I’m doing having an impact? Et cetera, et cetera, until I’ve driven everyone around me mad if I’m not careful.

This is not a useful trait in plenty of employment areas, I’ve found. Quite often, employers don’t enjoy being questioned on why they do what they do in the way that they do it. Especially not by someone who is brand new to a job who has trouble keeping her head down and learning the work without asking so many pesky questions.

But that’s the whole point of data science! Employers hire data scientists to improve processes and procedures, explore new or better opportunities, and, most importantly, ask questions. Finding a job that encourages and nurtures my natural tendencies and quirks, rather than trying to squash them, is a huge driver of why I’m currently looking to move down another career path.

Have you ever forgotten the name of a person or concept (or movie, album, app, class, et cetera), and then spent several minutes explaining who or what you mean to the person you’re talking to? I am the most guilty of this. For whatever reason, my brain easily associates information but often forgets the proper label - I can hardly ever remember anyone or anything’s name!

The silver lining is that I’ve become pretty good at explaining concepts, connections and context in order to become understood. Luckily this also manifests in ways that are more flattering to me than how I’m terrible with names. Communication of complicated ideas, while conveying the appropriate connections and context, is one of the most important skills a data scientist can have. While communication skills can always be improved, thinking of myself as a relatively good communicator of ideas was one of the things that led me to think of data science as a promising option. 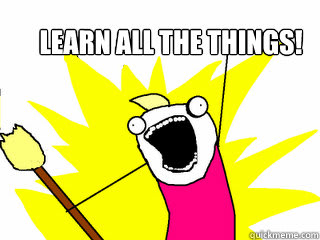 On the other side of that coin, learning new things is exhausting - especially once the newness wears off and the real work of learning begins. I’m absolutely guilty of starting to learn yet another new thing before I really master what I was previously learning (aren’t we all?). The way to shortcut this, I’ve found, is to be constantly working on new projects or tasks that call on you to either learn new things or apply your knowledge in new ways.

The fact is that I will never know all of the possible languages or tools I could use as a data scientist. Chances are, the daily tools I will use five or ten years from now haven’t even been invented or written yet. While this is a daunting prospect, it’s also exciting since it means that I’ve placed myself in a position where I’ll always be challenged to learn new things.

While these considerations were only part of what led me to dive into the Flatiron School’s immersive data science program, they are fundamental parts of me that I hope will translate well into a data science role. Certainly I don’t think these are the only traits a data scientist needs, or that all data scientists need these three traits! And I won't know for a while whether these traits actually set me up for success in a data science role - stay tuned.

What traits do you have that translate well into a data science-focused position? Would love to hear the thoughts of beginner and established data scientists alike!

Cover image sourced from SimpliLearn. Monty python gif sourced from GifGlobe. Learn all the things sourced from Quick Meme, with image credit to Hyperbole and a Half.

Hacking into your phone in 2022

You don't need void 0 in JavaScript