1. An Introduction To Closure

Closures are an extremely powerful feature of the JavaScript programming language.

💡 A closure is a combination of a function bundled together (enclosed) with references to its surrounding state (the lexical environment). In other words, a closure gives you access to an outer function’s scope from an inner function. In JavaScript, closures are created every time a function is created, at function creation time. MDN

Let's throw more light on the above definitions with an example below:
Kindly run the code below and consider its result.

Our small contrived example above features a function getBio that takes a succinct developer bio and returns another function (an anonymous function) that takes a developer name. This inner function then tells us about the developer by logging his name and his bio to the console.
One thing to note is that the getBio function does not return a function call but rather it returns an anonymous function. This means that when the getBio function is called it returns the code below:

And because this is an anonymous function we assigned it to the variable talkAboutDev. Then we called this anonymous function through the talkAboutDev variable which now holds a reference to it in memory.
I have already explained why this is possible in my previous article in the functional programming in JavaScript series.
If this is not very clear for you, I would kindly suggest that you refer to my article on anonymous and first-class functions in JavaScript for a quick brush-up. You can access it below: 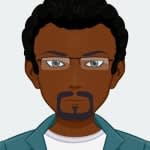 So when we call the talKAboutDev function, it tells us about the developer whose bio was passed to the getBio function.
This is puzzling❗

You can have a second look at the codes as you digest this question:

💡 This is possible because of closure. The inner function talkAboutDev still has access to the (free) variables of the outer (getBio) function even after it has returned.

The above answer may not really be satisfying especially if you do not have good knowledge of closure in JavaScript before now. We will be taking a deep look at this notorious, often difficult to understand, and extremely powerful feature in the JavaScript programming language in the remaining sections below.

✨ It is very important to have a good understanding of closure in JavaScript especially if you want to level-up your skill of the language.

In other to fully understand closure in JavaScript, we need a solid understanding of some key concepts, which are its fundamental tenets.
We will be looking at these in the next section.

Section 1 gives us an overview of closure. Although we saw it in action there are still some unanswered questions. In other, for us to get a thorough understanding of it, we need to learn about the key concepts that come into play when closures are created in JavaScript.
Let's deal with them below.

When a JavaScript program runs, a base (global) execution context is created and it wraps around all the codes.
Consider the image below: 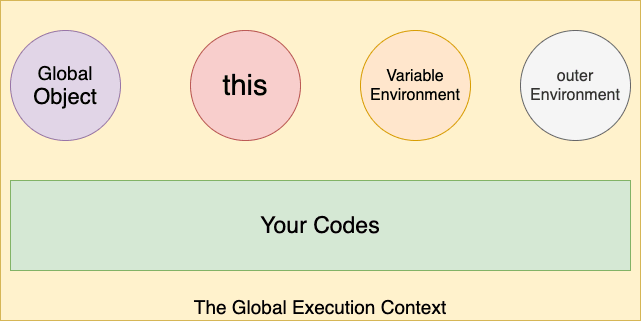 From our image, we can see that the global execution context is made up of the global object, the this variable, the variable environment, and the outer environment.

In other to get a good understanding of closure and even the JavaScript language we need to learn about all these and how they interact when our program runs.

Kindly run and consider the result of the code below:

💡 When the JavaScript engine runs your code for the first time, the global execution context is created. This would still be created even if the .js file is empty 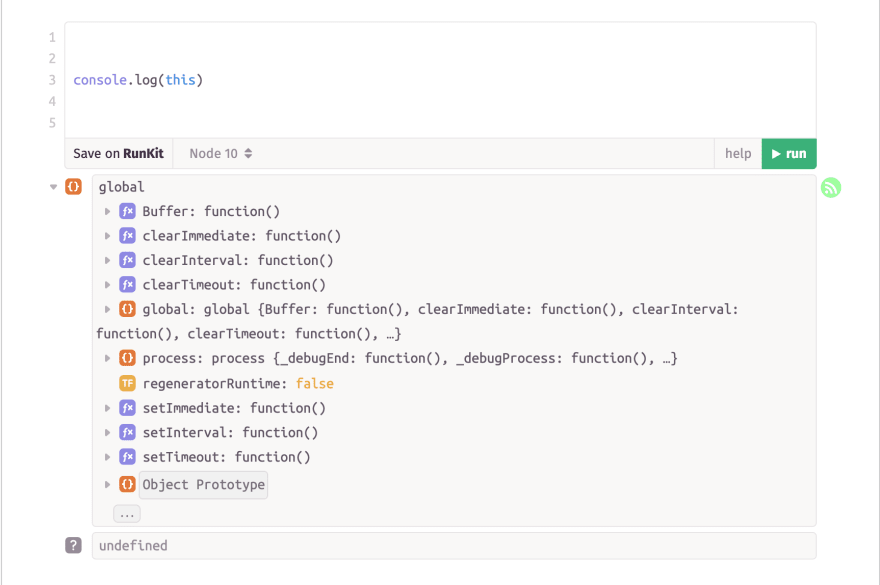 The this variable or keyword

This is a special JavaScript object. I have dealt with it in more detail in one of my articles in the OOP (Object Oriented Programming) in JavaScript series. kindly read more about it below.

All we would say here is that at the global level the this variable is equal to the global object. It points to it.

Let's elaborate on these by considering some examples.

Kindly examine the code below.
In what order do you expect to see the three console.log() results❓

Before we run the example above on runkit, let's take a deeper look at how the JavaScript engine would execute this code.

From the explanation above we expect to get this result:

Kindly run and examine the code below.

As we look at the scope and scope chain in this section, we will elaborate on the variable environment and the outer environment with code examples

Kindly consider the codes below.

💡 A good tip to note is that when the JavaScript engine does not see a variable in the variable environment of an execution context, it would go out to its outer environment to look for it.

What do you think would be the values of the devName variable at each console.log()❓

To answer this question let's go through the way the JavaScript engine would execute this code.

💡 A scope is a place where a variable can be found.

4. A Second Look At Closure

Since we now have an understanding of all the fundamental tenets required to grasp the concept of closure, let's revisit the first example and answer our long-standing question.

✨ Kindly note this when a function returns and its execution context is removed from the execution stack, its inner function will still have access to the variables in its variable environment as the JavaScript engine performs its search up the scope chain

The inner function is able to get the value of the shortDevBio variable even after the getBio function has returned and its execution context has been removed from the execution stack because its inner function still holds a reference to its variable environment. Thus, the JavaScript engine is able to find the location of the (free) variables (e.g shortDevBio) in the variable environment of the getBio function as it continues its search up the scope chain.

Therefore, we can say that the execution context of the inner function encloses its outer variables. We can also say that it encloses all the variables that it is supposed to have access to. This phenomenon is referred to as closure.

It makes possible some very powerful javascript design patterns used in some of the most popular JavaScript frameworks and libraries.

The code above can be re-written like this using an alternate syntax.
Kindly examine the code below:

What do you think the console.log() would output❓

💡 The alternate syntax uses two parentheses. The first () simply calls the outer (getBio) function and since that returns another function the second () calls the inner function, hence we get the same result

You can run the code in runkit below:

We see this pattern in action when we work with React and Redux using the React-Redux library.

✨ React-Redux is a library that connects React and Redux together. It poses itself as the official React bindings for Redux and it is maintained by the Redux team.

Below is an extract from an example in their official doc.

The details of what is going on here are out of the scope of this article but I just want to point out the way the connect function is called with two parentheses. The first takes null and mapDispatchToProps while the second takes the TodoApp component as its argument the result is then exported.
This pattern is made possible because of closure in JavaScript.

It has really been a long article and if you got here you are appreciated.
I do hope that at this point, you can see the benefits of our long discussion and at least got a thing or two from this article. If so I would be looking forward to hearing your opinions, comments, questions, or requests (in case anything is not clear) at the comments section below.

I'm a full-stack software developer, instructor, and writer. An open-source and Linux enthusiast with a strong blend of simplicity and creativity. In my spare time, I am cheering for Chelsea.

Surface Duo Dev: Do One Better with Dual Screens!

Lawrence Eagles
I'm a full-stack software developer, instructor, and writer. An open-source and Linux enthusiast with a strong blend of simplicity and creativity. In my spare time, I am cheering for Chelsea.
The 3 Main Reasons, You Should Learn JavaScript
#javascript #beginners #codenewbie #showdev
An Easy Guide To Understanding Classes In JavaScript
#javascript #tutorial #showdev #beginners
Hello everyone, I apologize for being totally off for a while now.
#tutorials #showdev #webdev #watercooler