I know I got excited with the title there but it is kinda true 😅. In this blog post, I will cover why your switch to GQL and Apollo Client 3 should make you walk away from Redux. I will also talk about my journey from Redux -> Apollo Client. 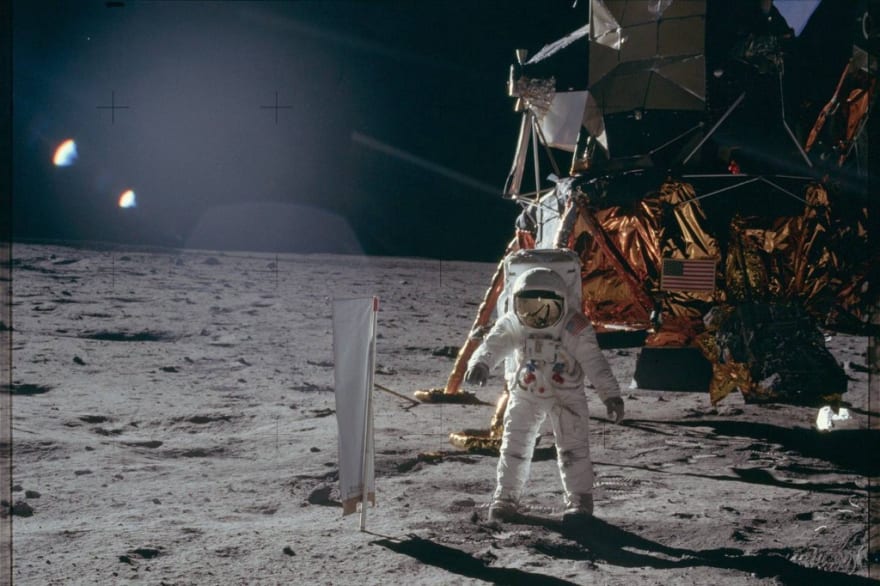 I have had my share of doubts so in the past couple of projects, I was really skeptical of using Apollo Client as a state management solution. I love ❤ Apollo and specifically the changes made in Apollo client 3 that changed my mind completely 😻

Why I like Redux and what it is good at 💙

which brings me to my next point… 👇

What is considered a good state management solution? ✅

and I’m sure there are more but the above were the top ones in my list! 🥇

After I started using GQL ✨ 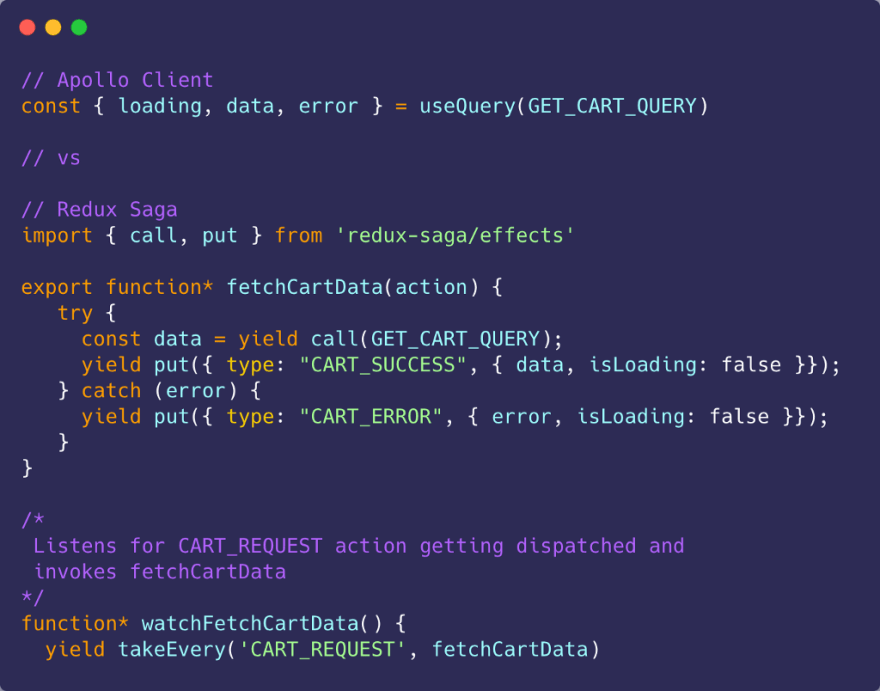 A lot of boilerplate code has reduced 😈 You get the loading, success, and error states right from the useQuery and useMutation hook.

So what was missing? 😅

Going back to the definition of a good state management library 👆

But with Apollo Client 3, they introduced Reactive Variables and local only fields that changed everything 💖

They are fields that resolve on the client side itself by reading data from the cache if you want thus replacing the transformers in Redux. Let’s take a look how that would work.

My data is normalized (no dupes please 🙏) 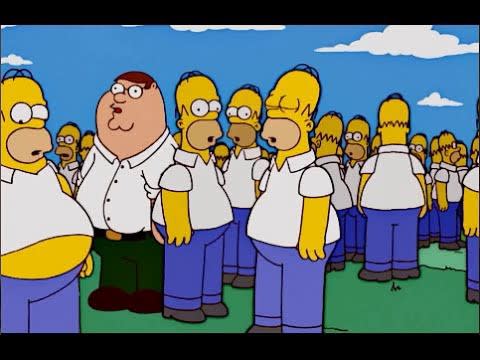 Apollo Client takes care of the heavy lifting for you 💪. You don’t need to constantly dispatch actions to change state. With redux, we were really used to that and the benefit there is you have full control although do we really need full control? 😶

You are already using GQL ❤️ so everything is a graph 📈 and is stored in the graph i.e. you already have all your data in your cache then why add Redux on top to duplicate it? 🤷‍♀ You are going to add more overhead 🙈

Apollo Client automatically caches your data and normalizes new data in query responses and after mutation. Similar to what you would do in Redux where you would need to make sure that your data is normalized. If you are onboarding a new developer, it’s hard because they also need to consider and learn how to do this on an architecture level which adds more overhead.

Apollo client stores data using references so it can be smart by looking it up easily using that reference as a key. Here is an awesome blog post 🔗 written by Khalil Stemmler on Demystifying Apollo Cache which you should read before switching to AC3 for state management. 💯

We want data transformations in an application so there is a clear separation of side-effect to transform layer. This way we can make sure that our component file is not huge and we can write tests for those transformers

We will use local only fields mainly for transforming data.

Local only fields is a way we can define client side fields on the GQL type that doesn’t need to come from the server. You can resolve them locally on your frontend.

As a user, I want to see if an item is out of stock or low stock based on the items in my cart.👩🏽‍💻

Here is how your React component might look like for it without using the Apollo client side variable: 💄 ⚡️ 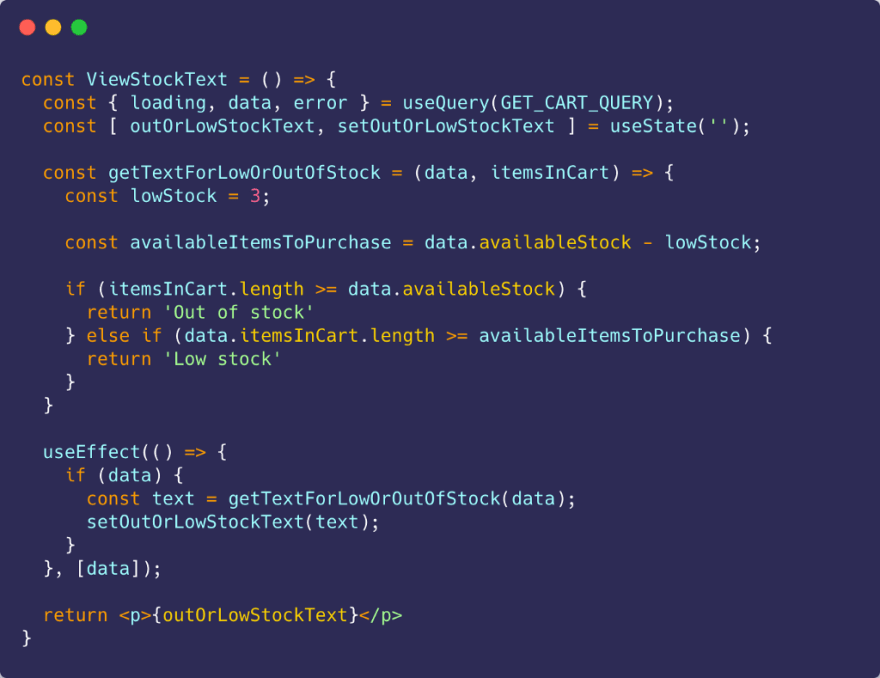 Typically in Redux, we would extract the logic of the function getTextForLowOrOutOfStock outside using a redux selector. 🆗

With AC3, you can achieve the above by reading the cache and adding the string for ‘out of stock’ and ‘low stock’ accordingly within your client itself.

OK But, how can we use local only fields? 🤔

We can create local only fields on the Cart type with the @client directive. 🎉 For example, ⚡️ here stockText is the client side field.

With the @client directive, Apollo client will look into the cache to resolve the field. It won’t make a call over the network for that field because of the directive. Now stockText can be accessed anytime we declare a Cart type because it is a field on the Cart type. 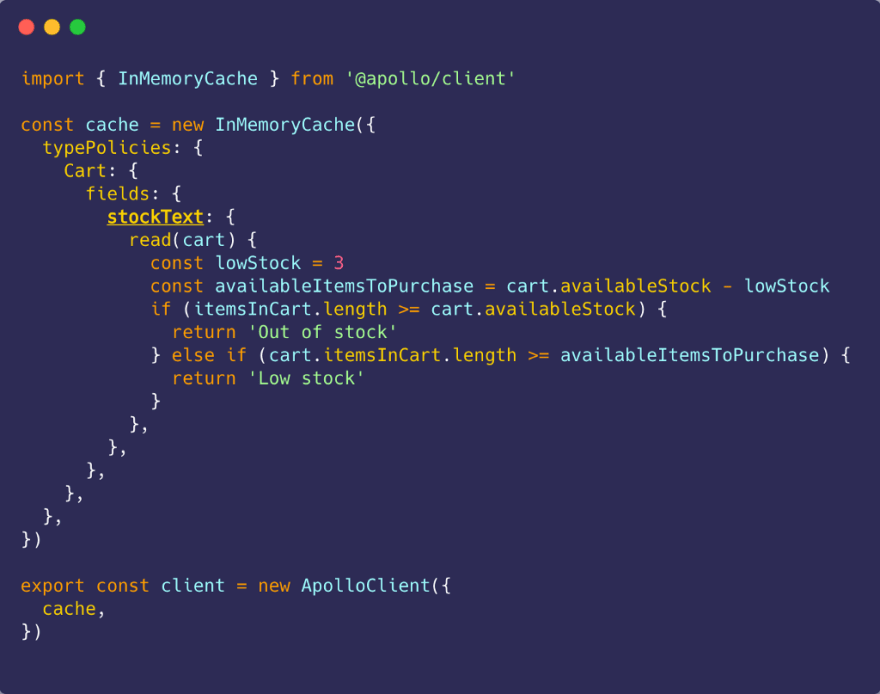 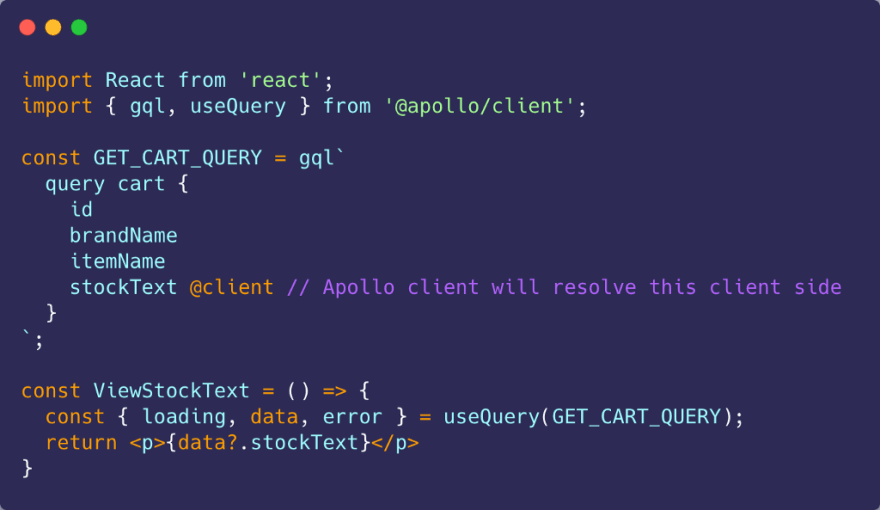 We can also create custom client side values stored outside the cache known as Reactive Variables. Sometimes we just want to create a field outside of the type structure which can still be accessed through the Apollo client globally. For that, Apollo client gives us Reactive variables.

Modifying a reactive variable triggers an update of every active query that depends on that variable, as well an update of the react state associated with any variable values returned from the useReactiveVar React hook.

Reactive variables don’t update the cache but store the state information that we want to access at any point in our application. In Redux, we usually dispatch an action to store such a value in the store.

For this you would have to read all the items in cart, check items that are on sale and count them. With Apollo client, you can achieve this by 👇 ⚡️ 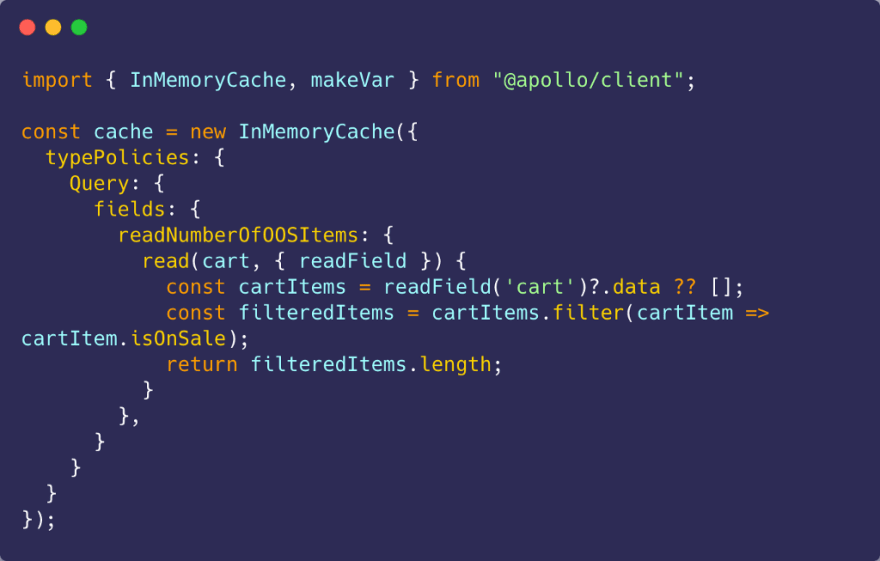 You can do way more than this. You can also access existing fields (i.e. readNumberOfOOSItems) through other fields as well. 🙌

You can access the above readNumberOfOOSItems via a query as well which gives you loading, data and error states:

But wait, what is the difference between local only fields and reactive variables? 🤔

In a local only field, you create a new field on the type itself i.e. from our example, we created stockText on the Cart type i.e. you can’t access stockText anywhere else.

But for reactive variables, you can access it anywhere you like and it isn’t restricted to a specific type. Unlike the Apollo Client cache, reactive variables don’t enforce data normalization, meaning you can store data in any format you want. 🤯

Once we do retrieve data or if the user wants to route based on certain information from the server, we might want to trigger asynchronous requests or rather specific actions that the user should take.

As a user, I want to be taken to the sign in page if I’m not logged in else I want to see the app page

Here we want to track if the user is logged in or not and accordingly route the user. We can achieve this by creating a reactive variable for it.

Reactive variables are variables stored in the client and outside the cache but the components can also access their values directly. In the example below, isUserLoggedIn is a reactive variable that has been created using makeVar function. It invokes the function to check if there is a token in the browser Cookies🍪. (In the real world, we will obviously check for token expiry as well 😉). 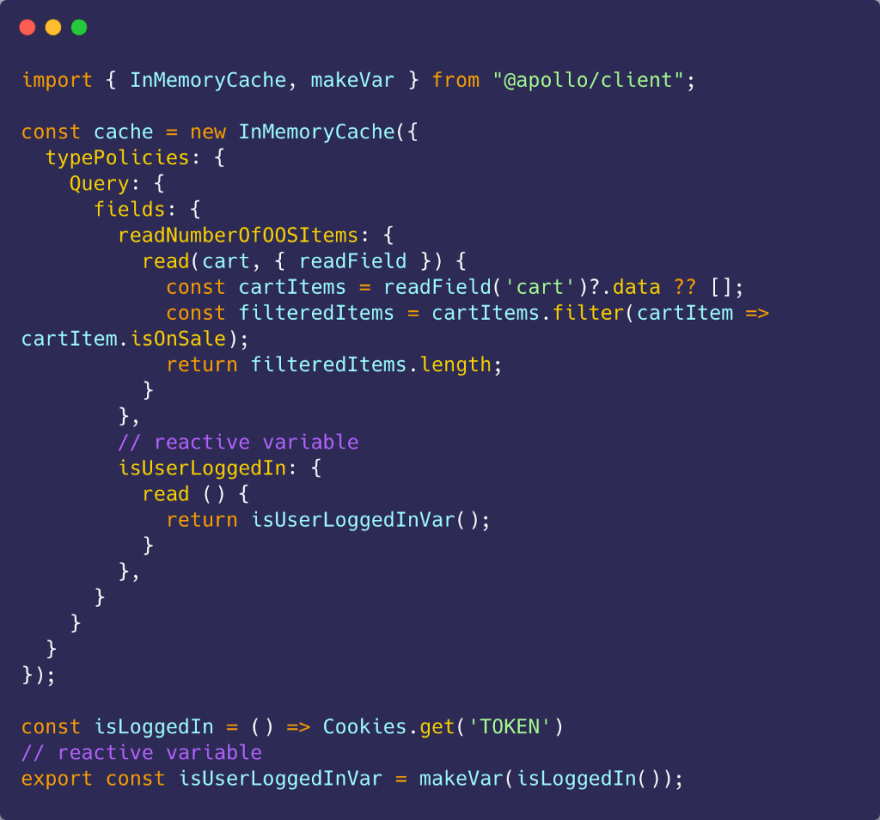 Anything under fields is a field policy. A field policy is basically a contract between client and the function which dictates how that field is going to be resolved. We have a field policy to read the number of out of stock items and check if the user is logged in or not.

Next, in order to access this value within the component, we can do the following ⚡️

The above will re-render whenever the value changes for isUserLoggedInVar

If you want to trigger an API request once the user has logged in, you can achieve this by listening to isUserLoggedIn in a useEffect. 👈

Therefore, we can trigger async requests based on what’s in the state.

But wait, can I update the value of the Reactive variable? 🤔

Lastly, visualize the store i.e. we can view our global state and debug easily

But after understanding how Apollo client stores data internally and how it optimizes it, things got a lot easier. I am able to visualize the cache. 😄 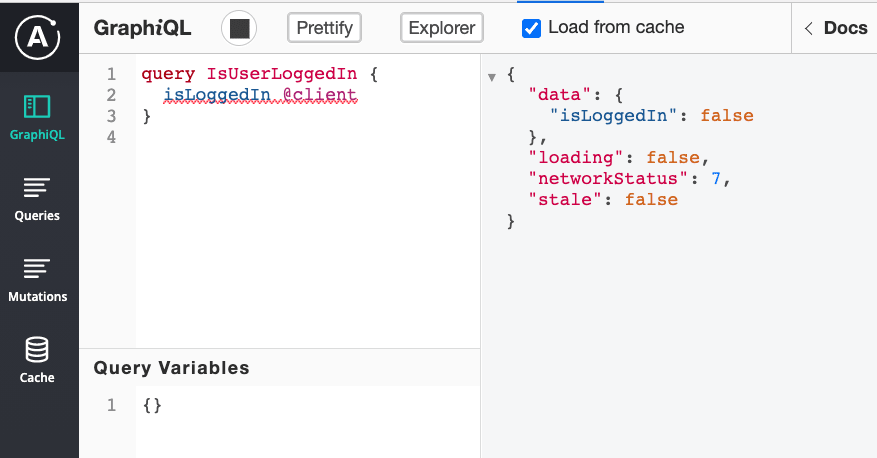 I find that Redux dev tools are superior with time travel although once you learn how the cache looks like and how it takes care of the heavy lifting for you, it will get a lot simpler. But, I would say this is definitely a pain point of Apollo client dev tools overall 🤕.

Thank you for making it so far, hope you found this post useful 💯 and it helps you draw comparisons between Redux and Apollo Client. 🙌

...is because they want to read more. Create an account to bookmark, comment, and react to articles that interest you.

5 ways to declare a function in JavaScript

Solving day 01 of Advent of Code 2022 in JavaScript

Once suspended, kulkarniankita9 will not be able to comment or publish posts until their suspension is removed.

Once unsuspended, kulkarniankita9 will be able to comment and publish posts again.

Once unpublished, all posts by kulkarniankita9 will become hidden and only accessible to themselves.

If kulkarniankita9 is not suspended, they can still re-publish their posts from their dashboard.

Once unpublished, this post will become invisible to the public and only accessible to Ankita Kulkarni.

Thanks for keeping DEV Community 👩‍💻👨‍💻 safe. Here is what you can do to flag kulkarniankita9:

Unflagging kulkarniankita9 will restore default visibility to their posts.