What's a reasonable way to tackle a problem that looks hard to solve? Well, you would need to try to make the problem easier and there are some problems that can be solved by going smaller - splitting the problem multiple times into sub-problems, looking for an answer.

Those sub-problems can either interact with each other (i.e. requiring one of them to be solved before solving another one) or they could be entirely separate from one another, perfectly fitted for solving separately and then combining them.

Divide and conquer is an algorithm design paradigm which works by recursively breaking down a problem into a number of sub-problems until they become easy enough to be solved directly and then combining their solutions.

In general, three steps can be observed in the algorithms designed using this paradigm:

The examples I have given to each steps sum up to explain the concept of one of the most efficient comparison-based sorting algorithms - Merge Sort, which follows a Divide and Conquer approach.
Quicksort, another efficient sorting algorithms also follows this design paradigm.

However, in this article we will focus on another extremely interesting problem that can be solved using a Divide and Conquer approach. Let's state it.

Consider an euclidean plane containing N points given by their x and y coordinates. Determine the distance between the closest two points in the plane.

We know that the distance between two points, A and B can be expressed as:

From now on, we may denote this distance as d(A, B), for simplicity.

We can devise a straightforward solution - consider every pair of points A and B and calculate their distance. This approach has an O(N^2) time complexity.

Let's try and find another solution by following a Divide and Conquer approach.

We can find those points at step 3 by building another set, Q, storing the points on either side of line a that are, at most, at distance d from line a. We can then brute-force our way to finding if there is any pair of points that can result in a smaller distance. 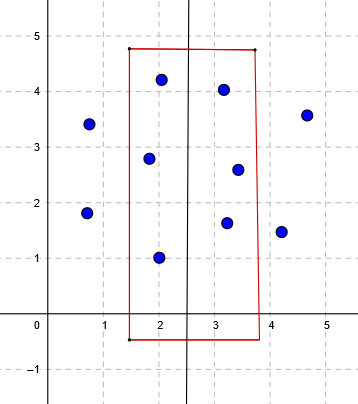 For example, considering the set of points I chose above, it is possible to obtain an answer to the problem by looking in the area determined by the red rectangle. Bear in mind that this drawing is not exact, as I have approximated the distances and how the area would look myself.

Now let's look at a Python implementation of the method I presented. We will work with the squares of the distances to improve performance.

That concludes our article for today. The Magic of Computing will be back with another article in which we will discuss the other problem solving paradigm I mentioned in this article - dynamic programming. Until then, you could take a look at some backtracking insights. Or maybe you fancy Graph Theory. Or you're a big fan of the Fibonacci series?

Get Up And Running With The useEffect Hook.

My tools for front end development

Currency Conversion With Fixer: Fixer's currency conversion and how to use it on your website