You sit down at your desk to compile a report and within a few minutes you have checked your email, scheduled a doctor's appointment, and have Netflix going in the background. Our environments and priorities are constantly pulling us in different directions. With so much to juggle, it feels as if the only way we can get everything done is to multitask.

Well, not exactly. While we may think that multitasking is a skill we can master, science says otherwise. The message is becoming more prevalent: your brain performs best when it focuses on only one thing at a time. This practice is known as "single-tasking", and it's a great way to work more efficiently.

In this article, we'll share three powerful single-tasking methods to break away from your multitasking mentality and regain your focus.

Multitasking comes at a cost

As many of us have shifted to working remotely in an era where the average home has more than 10 connected devices, it's becoming increasingly difficult to stay focused on a single task while the digital world competes for our attention. We think that we can easily shift gears or multitask -- without realizing that this negatively impacts our ability to get things done.

According to one report, only 2.5% of people can multitask effectively. Everyone else faces some performance deficit when trying to multitask, where they're constantly switching from one thing to another. The result is that tasks actually take *longer *and are more prone to errors.

Researchers call this performance deficit a "switch cost," and the results are typically unavoidable. Think of the brain as a computer with a certain amount of processing power. When we switch tasks, the brain requires extra processing power to bring forward the information needed for the new task. And, like a computer, the more you ask it to process at one time, the worse its performance.

Studies have further shown that multitasking in everyday life can affect sustained attention and long-term memory. We need to recognize that multitasking isn't only bad for the task at hand but also has lasting impacts on how well the brain can do its job.

Make the change to single-tasking

Single-tasking is, as you probably guessed, focusing only on one task at a time. If multitasking causes us to perform poorly, then, by contrast, we can improve our work's quality and efficiency by single-tasking.

Even as we come to accept that multitasking is harmful to our brains, "un-learning" this behavior can be a challenge. Making the shift to single-tasking takes some effort and practice, but you can incorporate some simple things into your day to reframe your thinking toward single-tasking.

1. Set due dates and block time for longer tasks

Setting due dates for your tasks is as simple as taking your to-do list, prioritizing it, and clearly identifying when you will get the work done. Rather than having an endless to-do list that isn't reflected in your schedule, this practice forces you to commit to completing work by a certain date -- and has the added benefit of creating awareness around your week's capacity.

For example, your to-do list may include longer, more intensive and strategic tasks like "writing a strategy doc" or "submitting Q4 financials". It may also include a ton of little tasks, like "respond to an email from Fred" or "review PRs in Github". In this example, you'd want to block time for your most important and time-consuming tasks -- the ones that will often take a lot of your energy and cognitive capacity -- so that your week doesn't end up being a scattered mess of activities.

In order to avoid another frenzied day of multitasking, start by assigning a due date to the tasks that you know are going to take awhile. Anything longer than an hour would fall into this category. Then, block time for those tasks on your calendar based on when they need to be completed. Don't confuse the due date with the date the task needs to be scheduled! If you need six hours to write an important document by Friday, it doesn't do you much good to have the time blocked on Friday afternoon. 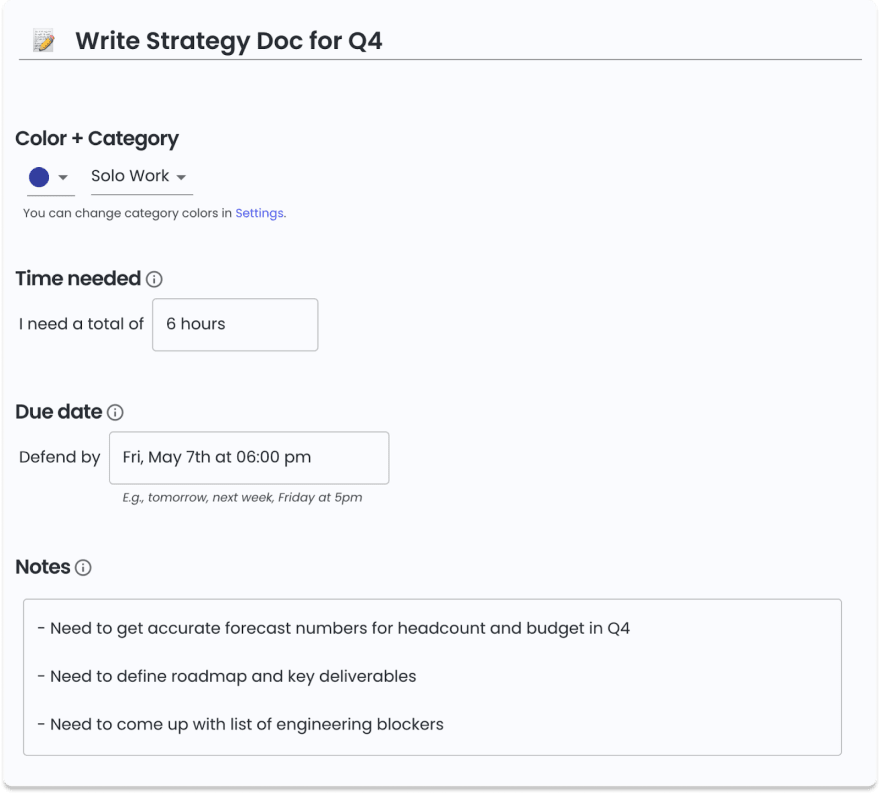 It's important to give yourself enough cushion to move tasks around as necessary as well as to take breaks and check off some of those smaller tasks we mentioned above. Something more important may come up that forces you to reprioritize your task's due date. Or, a task may take longer than you initially thought, which may mean you won't be able to get through all of your tasks due that day. Allow yourself the flexibility to move things as needed on your calendar.

Lastly, because longer tasks tend to be more cognitively demanding, it's important to set time aside for them during the periods of your day where you're most productive and "locked in". So if you're not a morning person, don't block time for writing that lengthy strategy document at 6am. Instead, use that time for the things that aren't going to demand as much of your energy.

2. Set aside dedicated time for the small stuff

Blocking time for specific tasks that you know are going to take awhile is a great way to stay focused on one big thing at a time. But what about all the other little things that you need to get done each day? How do you incorporate those into your week without losing focus on what matters?

The answer is so simple, it might shock you: create a routine that you can stick to every day where you batch all of your "microtasks" into one time block. Instead of earmarking time for every little thing -- or distracting yourself from your core work as new pebbles come in -- you just set aside a single block of recurring time for it.

This approach has two big advantages: 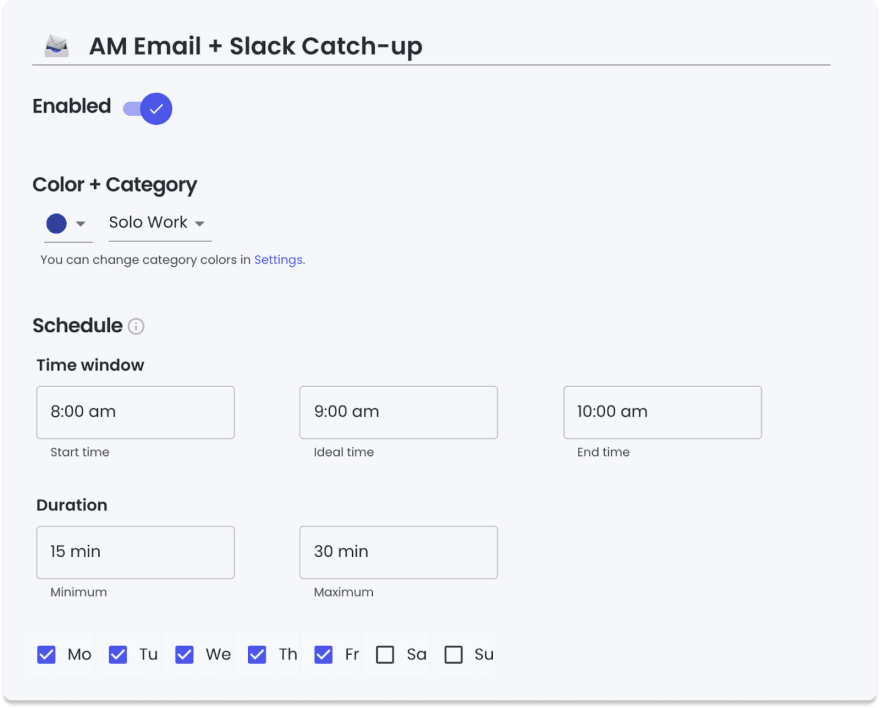 The key here is to optimize your routines for smaller tasks around when you're least productive and energized. It's a bit unintuitive, but essentially what you're doing is confining your low-cognition tasks to the period of the day where you feel least motivated, and reserving your energy for the more important and demanding to-dos. Not only does this allow you to focus your productivity around your most important tasks, but it also ensures that you get to feel a sense of accomplishment during your less energetic moments.

Just as you need to keep your time blocks for important tasks flexible, you also need to do the same thing for your "microtask" routines. You should have a rough sense of when you want to have the routines happen each day, but with your schedule constantly changing it can be difficult to stick to exact times. Creating flexible routines on your calendar for your smaller task work enables you to get the time you need for the little things without having to feel boxed in by your schedule.

3. Stick to your plan (if possible)

A study found that 3 out of 5 people have more tasks on their to-do lists than they can possibly accomplish. Between wanting to be helpful or a tendency to jump in and fix problems, "yes" can often be the first response out of our mouths.

It's understandable that we want to say Yes to everything that comes our way. We want to feel useful in our jobs, and it's our natural tendency to help others where we can. It's also sometimes simply not an option to say No. A meeting with your CEO, a Slack message from a valued team member who tells you they're thinking about leaving the company, or an email about a project that is going off the rails -- all of these kinds of things rightfully steal our focus.

But those Yeses can add up quickly, and more often than not results in you straying from your core plan. A few meetings here and there start to eat away at your strategic single-task time, or rob you of the routines that you need in order to keep your head afloat. Suddenly you're doing the important work in the evenings and on weekends, or catching up on your email instead of spending time with your loved ones.

Here are some questions to ask yourself any time you're finding yourself attracted to saying Yes to a distraction or shift in your ideal plan for the week:

And, remember that declining things doesn't make you a bad person. In fact, if you do it right, declining things can actually have a positive effect on you and your organization: it lets you focus on the stuff that really matters, and it illustrates to other people that it's OK to defend the time you need to get the important things done.

Retrain your brain and regain your focus

Maybe you're still skeptical about single-tasking after reading this article. Maybe you even checked your email several times in-between reading it!

Let's try this for a week: go through your to-do list, find the 3-5 most important things that you want to get done, and block time for them. Then create a couple flexible routines to fit in the smaller stuff. At the end of the week, see how you feel.

We think you'll find that your workweeks are happier, more productive, and more evenly energized the less you engage in multitasking. By starting with these single-tasking tips to manage your calendar, you can build up your ability to single-task over time.

Run README.md in your terminal

Once suspended, kristimke will not be able to comment or publish posts until their suspension is removed.

Once unsuspended, kristimke will be able to comment and publish posts again.

Once unpublished, all posts by kristimke will become hidden and only accessible to themselves.

If kristimke is not suspended, they can still re-publish their posts from their dashboard.

Once unpublished, this post will become invisible to the public and only accessible to Kristi Anderson.

Thanks for keeping DEV Community safe. Here is what you can do to flag kristimke:

Unflagging kristimke will restore default visibility to their posts.