I guess I'm not alone wishing that rush uses commit messages for change log generation.
It's actually not so difficult (once it's done 😎).

Perfect. I want to take the last two commits anyway, and I want to make sure that any failures in my code will not affect commits.

The hook will call a custom rush command, which will in turn execute my custom script. One advantage of using custom command is that I benefit from autoinstallers that install all required packages

Rush autoinstaller will take care of installing any packages I need in my script. I don't want to install them in the repo's root, this is not how rush works.

And finally, the script itself

The javascript script with... well, yes, the business logic.

I need couple of things here.

You should now have the following package.json file:

Create a rush-changefiles.js file in the common\scripts folder.
Before we dive in into the business logic implementation, let's make sure everything works as it should. I'm just going to print "rush-changefiles.js" to the console output.

You will see that rush is executing the new command, installs all the packages needed by the autoinstaller, and prints the "rush-changefiles.js" to the console.
The autoinstaller job is only executed the first time, if you run the rush changefiles again, it will complete much faster: 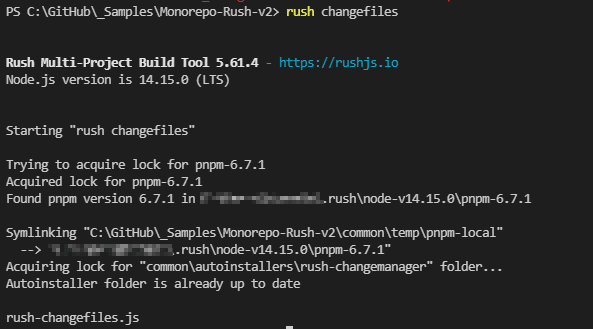 Now, the only thing that is missing, is the actual business logic.

You may find the source code on GitHub.

Q. What is JavaScript/Socket.io, node.js for Perl?