This is a series of posts that will illustrate the what, why and how of Node. I'll be sharing my learnings from a course on Advanced NodeJS by Samer Buna offered on PluralSight. Any code samples tagged or attached will be available at the following repo.

For help, ask in #questions at slack.jscomplete.com

VM executes the Javascript code. So, v8 actually executes your JS code when you run a node application.

You can see the list of all group features by 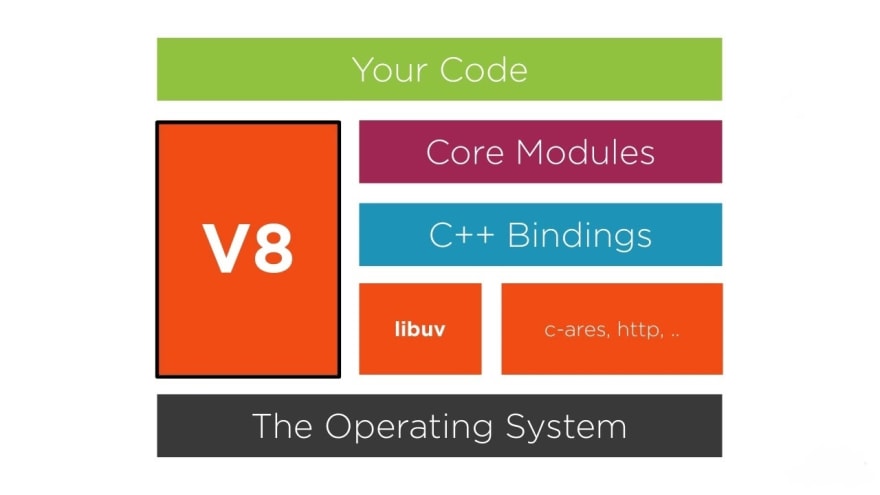 Node is more than a wrapper for v8, it provides APIs for working with the file system, operating system, binary data, networking and much more. It mainly constitutes of the following components.

When node is done waiting for IO or timers, it usually has callback functions to invoke back to. When it's time to invoke these callbacks, node passes control from libuv to the v8 engine. When v8 executes the callback, it passes control to Node itself.

When control is with v8, Node can not execute any Javascript code as v8 is single-threaded. Node will simply wait until v8 is ready for more operations.

This is actually programming in node so simple yet powerful as we don't have to worry about locks or race conditions. There is only one thread where our Javascript code runs.

libuv is a C library developed for Node, but now it's used by Rust, Julia and others. It's used to abstract the non-blocking I/O operations. It provides a consistent interface across many operating systems.

It handles operations on the file system, TCP/UDP sockets, child processes, and others. libuv includes a thread pool to handle what can't be done asynchronously at OS level.

Apart from v8 and libuv, node has a few more dependencies.

1 line of code: How to reverse all words of a string