It was pleasing to see the number of reactions and reads on the last part of the tutorial! As promised, I am publishing part IV, where we will look into boolean type support and more complex programs with if statements!

We have two goals for today:

Boolean expressions are required to implement conditions and loops (coming soon!). There are a few main challenges we have to address to support boolean logic in LR-language:

Despite it looking like a lot of work, I'll try not to spend a lot of time on it. My main reason is that boolean implementation is just a bit more complex version of the work we've done in parts II and III of this tutorial. I will only cover the main ideas behind the implementation to help you to navigate through the code on your own. You can see all the changes required to be made in this commit.

Adding the new type is no different compared to the work we've done last time. We just have to do the following steps:

line to make use of them in expressions.

We can continue with parsing and execution of the operations once the type is defined. It is important to define the operator precedence correctly. We are not going to reinvent the wheel and will just use the same precedence used in rust:

Here is the first real challenge. Negation operator ! accepts only one operand and so far we can only represent the expressions containing two operands and an operation between them! In order to overcome it, we rename the existing Opcode struct to BinaryOpcode and introduce a new one:

We can then make the changes to Expr enum to represent both unary and binary operations:

We are now forced to introduce the new match branch to the evalutate_expression function in order to make the code to compile after the above change:

Note that we apply the ! operator to Value struct here. Rust will only allow us to do so if we implement the Not trait for it:

As a bonus, we've made ! to work as a bitwise negation for Int type. The unary_error is a tiny helper macro to return an error.

Finally, we modify our grammar to be able to parse ! unary operation:

We are going to apply the same trick as in part II to implement the operator precedence correctly. As a reminder, the idea is to avoid the necessity to deal with the ordering in runtime and instead take care of it at the phase of parsing.

First, let's rename existing Expr non-terminal into Sum to better reflect the meaning of it. We would then apply the following induction rules: 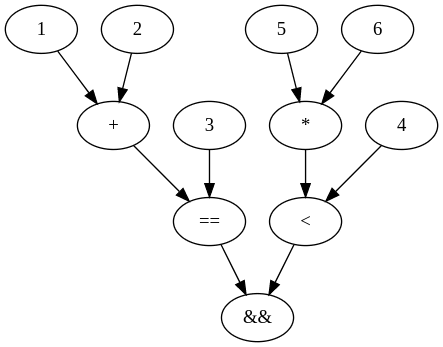 The above idea could be expressed in the formar grammar in the following way:

The reason this grammar enforces the construction of the above graph is that to produce, for example, Comparison we first produce two Summ involved. This way, the Expr for Comparison would be applied to the result of the Sum expressions evaluation as operands.

We are able to parse new expressions now, but not yet able to evaluate them. You might expect to see implementations of a few other rust traits (like PartialEq) to define required operations, however there are a few problems with this approach. First, rust does not allow to redefine && and || operations. Second, unlike Add, Sub, Mul and Div traits, the PartialEq does not allow to use Result as a return type. In other words, PartialEq expects the comparison not to fail, which is not true for our case.

Luckily enough, we have no need to implement the traits! We can just define functions for required operations and called them instead in the evalutate_expression method:

To keep this tutorial short, I avoid providing the implementation of the above functions here. You can find it in the operations/logical.rs file in this commit.

Before we jump into the implementation of the condition operator, we have to solve another problem with our code. Do you remember an optional parent: Option<Box<Frame>> field inside the Frame struct which we've planned for the parent frame variables lookup? So far we never had a need to support nested frames and never set it to Some. Let's fix it!

In order to do so, we introduce a new structure called Block and consider the block as one variant of the statement enum:

The execute_statement match should be now extended to have a new branch:

To execute the block, we first create a new child frame with the current frame as a parent, execute the statements of the block using a new frame and get the (possibly modified) parent frame back:

It is time to implement the main concept of today's tutorial! We are going to support the following syntax:

The { and } are mandatory (for simplicity) and the else branch is optional.

The representation of the above using the grammar is the following:

Here is the final code of the Block struct:

Since we've added a new Condition variant, we need to update execute_block again:

The main logic is hidden in the execute_condition method:

We evaluate the condition expression, ensure that the result is boolean and execute then or else branch (if define) depending on the condition value.

We've done it! The LR-Language supports if statements now! Here is how the main frame of the above program looks after the execution:

Please stay in touch for Part V, where I plan to implement for and while loops! I will publish it if this post gets 30 reactions!

The state of the source code after this part could be found in the part_4 branch of the GitHub repository!

The Future Of Software Engineering: Is Low-Code The Answer? [Infographic]

Once suspended, kgrech will not be able to comment or publish posts until their suspension is removed.

Once unsuspended, kgrech will be able to comment and publish posts again.

Once unpublished, all posts by kgrech will become hidden and only accessible to themselves.

If kgrech is not suspended, they can still re-publish their posts from their dashboard.

Once unpublished, this post will become invisible to the public and only accessible to Konstantin Grechishchev.

Thanks for keeping DEV Community 👩‍💻👨‍💻 safe. Here is what you can do to flag kgrech:

Unflagging kgrech will restore default visibility to their posts.