Why should you move?

I guess that if you're here, you already know... Quite sadly, starting November 28th, 2022, free Heroku Dynos and free Heroku Postgres will no longer be available.
While many devs happily used Heroku for their hobby projects and spend almost no time worrying about deployment, now is a good time to find another option than Heroku.

There are several good options out there, but today we'll be talking about CapRover.
I chose CapRover after a quick literature review, see for instance here, there or there.

an extremely easy to use app/database deployment & web server manager for your NodeJS, Python, PHP, ASP.NET, Ruby, MySQL, MongoDB, Postgres, WordPress (and etc...) applications! It's blazingly fast and very robust as it uses Docker, nginx, LetsEncrypt and NetData under the hood behind its simple-to-use interface.

Before going further, please note that I could not find a 100% free replacement for Heroku. CapRover is free and will remove from your
shoulders most of the complexity of deploying your apps, but to make it work you still need:

Good luck to find 100% free providers for these 😉 Now that this is clear, let's get started!

If you want to go straight to the code, see here.

1. Get yourself a domain name

I won't list all the existing options as many have done it already... You can look here, or here for instance.
In my case I chose OVHCloud as it competed well with others in terms of pricing and has its headquarters in my country.

2. Get yourself a server

Choosing a server is more delicate than choosing a domain name. To do so, you should follow the requiremnts listed
by CapRover.

In my case, I chose the easy way, the one recommended by CapRover, which is

In my case, I need to go to OVH manager and then

Then, create an A-record and 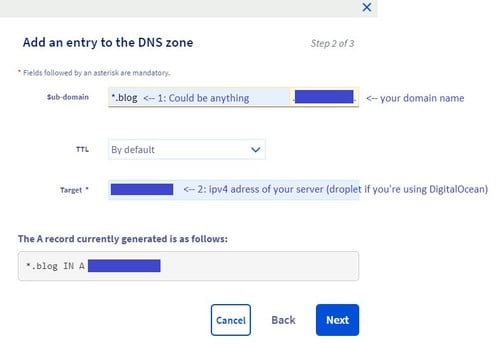 Set-up CapRover on your server

from CapRover Getting started doc

Assuming you have npm installed on your local machine (e.g., your laptop), simply run (add sudo if needed):

Below are the several steps and the answer to give if you are hesitating.

As prompted, you can now visit the page https://captain.blog.yourdomain.com.

4. Deploy your app to CapRover

To deploy to CapRover, you will need a Captain Definition File.
This file plays a similar role to the Procfile when you're deploying to Heroku.
It describes the foundation to run your app: its language and version.
As the Procfile, it needs to sit at the root of the project, next to the requirements.txt file.

In our case, as we are deploying a django app, it should contain the following (depending on your python version).

In order to try and actually deploy something, you could clone this project and
follow the instructions in the README.

On the page https://captain.blog.yourdomain.com, in Apps, create a new app with the name of your choice.

Then, go in your config in CapRover and Enable HTTPS. If you try to access your app at the address propsed
(which should look like https://this-is-a-test-app.blog.yourdomain.com), you should see something like below. 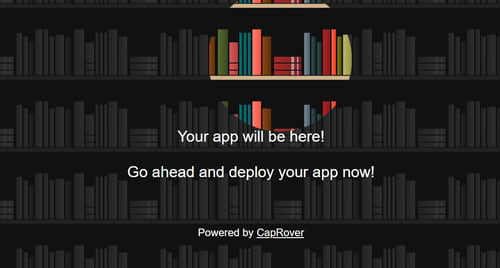 In a terminal run

Bravo 👏👏 Your app should now be successfully deployed!! 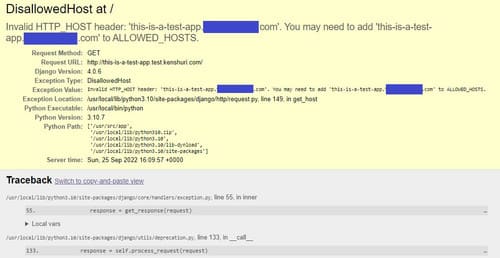 Well, we're almost there... As described in the repo README, we need to modify our app environments variables.

To do so, go in the tab App Configs in CapRover, and use the bulk edit to create the environment variables.

Go to you app again. Do you see something like this?

It could be for 2 reasons:

If the answer is yes, let's face it: this daisy button does not look at all like a daisy button!

Now, you should build the css file as described in the repo README

A new file blogApp/static/css/output.css has been created. Commit and push it.

To run collectstatic at deployment, you need to tweak the captain-definition file that we created before.

The default captain-definition for a python-django app define a default list of commands to be executed at deployment.
You can see these commands being executed (one step for each command) when you call caprover deploy.
Unfortunately, the run collectstatic is not part of these default commands.
We thus need to define a custom deployment file ourselves, stating explicitly that we want to run collectstatic.
To do so, we will create a custom Dockerfile!

Change your current captain-definition file so that it does not use the default django-python list of commands
but refer to your custom dockerfile instead.

At the root of your project, create a custom Dockerfile as below:

Each row of this Dockerfile corresponds to a command that was executed by default.
You can check it against the steps executed when running caprover deploy before.
There is only one addition: RUN python manage.py collectstatic --noinput

Now that this is done, you can commit, push and deploy again !

Bravissimo 👏!! You have now deployed 🚀 a django app to your server using CapRover: bye-bye Heroku 👋👋!

While everything is running perfectly at the moment, you could quickly face deployment issues if your were to add some heavier dependencies.
For instance, let's try to add pandas to your requirements.txt and deploy again.

If as me, you took the cheapest server available on DigitalOcean with only 1GB of memory, there is a big chance that the
deployment fails as this:

What's happening here is that your server is running out of memory and the entire server crashes.

This a well known issue documented

The doc describes possible options below

When you build on a paid service such as Heroku, your build process happens on a machine with high CPU and RAM. When you use CapRover, your build is done on the same machine that serves your app. This is not a problem until your app gets too big and the build process requires too much RAM. In that case, your build process might crash! See this for example. There are multiple solutions:

However, there is a simpler one that I would like to introduce (solution 3 is also implemented later in this tutorial)!

The problem is that the building of the docker image takes a lot of time.
The main reason for this is that we use the Alpine linux image.
This issue is discussed in this stackoverflow ticket
or in this very good blog post.
To put it simply, Alpine Linux is usually a very good image to use, but not when packaging a Python application: it's better to use a Debian based image in such cases.
This page list several images available, we'll use the slim image!

We're finally free from Heroku, and it works well! Moreover, now that you've deployed once,
it's even faster than with Heroku to deploy again!

To make your deployment even faster, we can follow Caprover doc advice, and implement a solution to build and deploy automatically from Github when a change happen on your main branch : how cool is that 😎 ??!!

Find the "Deployment" tab for your new app, click Enable App Token and copy this token. This is your APP_TOKEN secret.

In your Github Settings, go to Developer settings. Then, in Personal access tokens,
Generate a new classic token with scope: write:packages

Add the Docker Registry in Caprover

On the caprover machine where your app is deployed, go to Cluster, and add your Remote Registry.

Github secrets are variables used by Github when trying to deploy your app. You need to define several variables/secrets.

To define your Github Secrets, go in your repo Settings > Secrets > Actions

And define the following repository secrets.

This is done thanks to .yml that needs to live in a specific folder in your repo. Create a new file .github/workflows/deploy.yml

The final code is available here and the post was initially posted on my blog.

Once suspended, kenshuri will not be able to comment or publish posts until their suspension is removed.

Once unsuspended, kenshuri will be able to comment and publish posts again.

Once unpublished, all posts by kenshuri will become hidden and only accessible to themselves.

If kenshuri is not suspended, they can still re-publish their posts from their dashboard.

Once unpublished, this post will become invisible to the public and only accessible to kenshuri.

Thanks for keeping DEV Community 👩‍💻👨‍💻 safe. Here is what you can do to flag kenshuri:

Unflagging kenshuri will restore default visibility to their posts.