In software engineering, CI/CD refers to the combined practices of continuous integration and continuous delivery. The significance of CI/CD implementation is considered based on the benefits it brings. To help you decide if this is the right step for your organization to take, in this article, we will walk you through the list of 7 best advantages of implementing CI/CD pipelines to your software development life cycle. 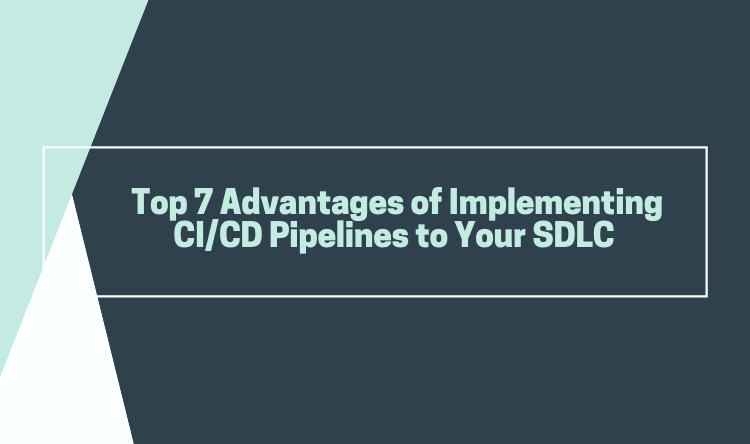 7 Best Advantages of Implementing CI/CD Pipelines to Your SDLC

One technical advantage of implementing CI/CD to your everyday software development process is that it allows you to integrate small pieces of code at one time. These code changes are simpler and easier to handle than huge chunks of code and as such, have fewer issues that may need to be repaired at a later date.
Using continuous testing, these small pieces can be tested as soon as they are integrated into the code repository, allowing developers to recognize a problem before too much work is completed afterward. This works really well for large development teams who work remotely as well as those in-house as communication between team members can be challenging.

Failures are detected faster and as such, can be repaired faster, leading to increasing release rates. However, frequent releases are possible only if the code is developed in a continuously moving system.
CI/CD continuously merges codes and continuously deploys them to production after thorough testing, keeping the code in a release-ready state. It’s important to have as part of deployment a production environment set up that closely mimics that which end-users will ultimately be using. Containerization is a great method to test the code in a production environment to test only the area that will be affected by the release.

Incorporating CI/CD pipelines into your organization’s development process reduces the number of non-critical defects in your backlog. These small defects are detected prior to production and fixed before being released to end-users.
The benefits of solving non-critical issues ahead-of-time are many. For example, your developers have more time to focus on larger problems or improving the system and your testers can focus less on small problems so they can find larger problems before being released. Another benefit (and perhaps the best one) is keeping your customers happy by preventing them from finding many errors in your product.

Using CI/CD, test reliability improves due to the bite-size and specific changes introduced to the system, allowing for more accurate positive and negative tests to be conducted. Test reliability within CI/CD can also be considered Continuous Reliability. With the continuous merging and releasing of new products and features, knowing that quality was top of mind throughout the entire process assures stakeholders their investment is worthwhile.

MTTR measures the maintainability of repairable features and sets the average time to repair a broken feature. Basically, it helps you track the amount of time spent to recover from a failure.
CI/CD reduces the MTTR because the code changes are smaller and fault isolations are easier to detect. One of the most important business risk assurances is to keep failures to a minimum and quickly recover from any failures that do happen. Application monitoring tools are a great way to find and fix failures while also logging the problems to notice trends faster.

Fault isolation refers to the practice of designing systems such that when an error occurs, the negative outcomes are limited in scope. Limiting the scope of problems reduces the potential for damage and makes systems easier to maintain.
Designing your system with CI/CD ensures that fault isolations are faster to detect and easier to implement. Fault isolations combine monitoring the system, identifying when the fault occurred, and triggering its location. Thus, the consequences of bugs appearing in the application are limited in scope. Sudden breakdowns and other critical issues can be prevented from occurring with the ability to isolate the problem before it can cause damage to the entire system.

Automation in the CI/CD pipeline reduces the number of errors that can take place in the many repetitive steps of CI and CD. Doing so also frees up developer time that could be spent on product development as there aren’t as many code changes to fix down the road if the error is caught quickly. Another thing to keep in mind: increasing code quality with automation also increases your ROI.

Want some more details on the benefits of CI/CD? Learn more

There are many benefits of CI/CD as it is a powerful and trendy software development method that has been adopted by many organizations. However, it’s not a one-size-fits-all solution. So, make sure that you’re aware of all the benefits and risks of these practices before incorporating it into your organization’s development process.

Katalon is a leading provider in software test automation solutions and professional services. We offer a flexible automation platform for teams of any sizes, at any stages of continuous testing maturity.
code of conduct - report abuse

How YOU can use Docker to manage deployments in the Cloud

A tiny "Deployer" made with Shell Script and Rsync