As a reconfirmation, Katalon Studio 6 and all of its previous versions will be obsolete on April 30, 2020 with a six-month grace period starting from October 2019, according to our community announcement. Here are all the details on the end-of-support or Katalon Studio 6 and what you need to know to prepare for the transition.

How am I Affected by This Change?

Katalon wants to provide you with a stable and quality test automation experience, which, if you continue using the unsupported versions, cannot be guaranteed. If after April 30, 2020, you haven’t upgraded to a newer version, you may experience these following impacts:

What are the Solutions?

The immediate solution is to upgrade to the latest version of Katalon Studio 7. There are two options:

Regardless of which option you plan to acquire, both these types of licenses come with many new features and enhancements and bug fixes compared to the older versions.

Is there anything I should beware of when upgrading to Katalon Studio 7?

Offline activation will be available in Katalon Studio Enterprise subscriptions. You may consider this option if your team has the need to activate offline.

You may have been familiar with Smart Wait—the feature that automatically waits for a certain amount before throwing a Selenium Wait exception. Smart Wait ensures all front-end processes—such as Javascript or Ajax—are static without having to add any additional codes. By upgrading to Katalon Studio 7, you will put an end to the wasteful efforts and resources put into solving the Selenium timing issue and maintaining code quality.

The Custom Keywords Refactoring feature allows you to transfer keywords to different places in the test project without altering their external behaviors.

In other words, if you move a custom keyword from one package to another, Katalon Studio will automatically update the new package and keyword identifier in the test scripts—without having you taken any extra step.

This feature is also available in Katalon Studio 7. You can refactor custom keywords from both your test cases and the Custom Keyword section.

Katalon Studio 7 is not just about improvements on the front-end user-interface (UI). In fact, the UI of Katalon Studio 7 almost resembles its closest version: Katalon Studio 6.x. However, there still lies a major enhancement in the backend—which is the reduction in memory leaks.

A memory leak occurs when the memory program does not release or return the allocated memory space. As a result, it can cause slower or unresponsive application behaviors.

We’ve made considerable adjustments to detect and lower the chances of memory leak by 25% on average. See the table below for our breakdown of memory leak reduction, based on each testing action. 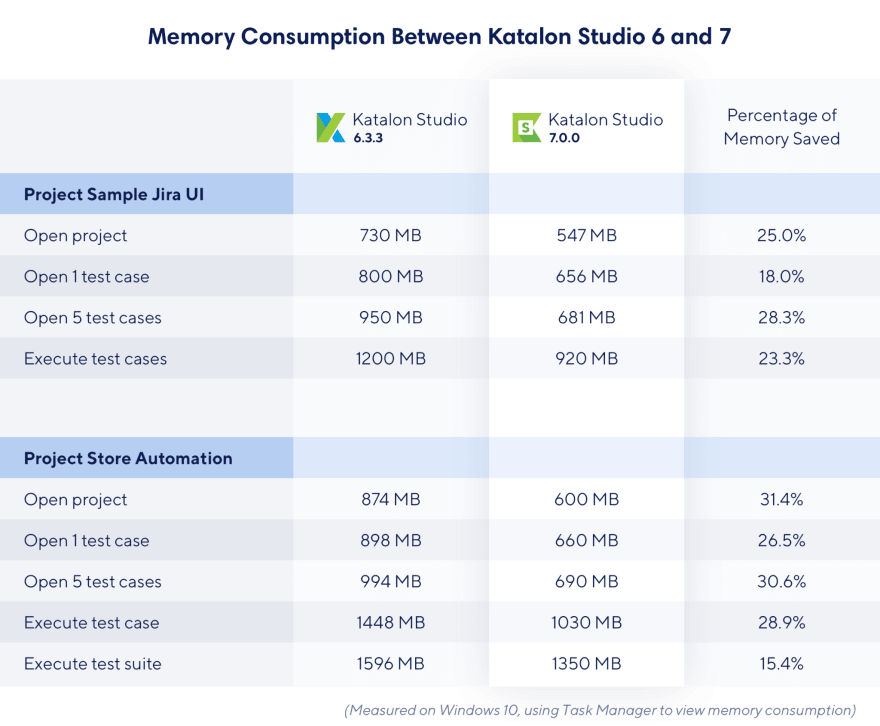 Other Features and Capabilities

Learn more about the major features in Katalon Studio 7 here.

Our team understands that this transition may cause inconvenience to your work. While our efforts to make Katalon accessible are still ongoing and won’t be perfect, we believe this is the optimal solution for both ends. Once again, thank you for choosing Katalon.

The post Katalon Studio 6 End-of-Support: Everything You Need to Know appeared first on Katalon Solution.