Hello fellow programmers 👋. in this article, we will discuss how we would use the RxJS library to implement the BLoC pattern as a state management solution for a React project.

Before going through the content of this article, it is assumed that the reader has prior basic knowledge in Rx, at least with observables and observers. The article will try to briefly go over these concepts, if needed.

BLoC, which stands for Business Logic Component, is a pattern created by Paolo Soares and Cong Hui from Google that aims to separate the business logic from the view in a given application. One of its primary goals is to make the business logic reusable and independent from the corresponding view. Initially, this pattern was introduced within the Flutter community, but throughout this article, we will take the concepts of BLoC and implement them in a React application. To start with, BLoC has these main rules:

The following diagram illustrates how the view and a BLoC interacts with each other. 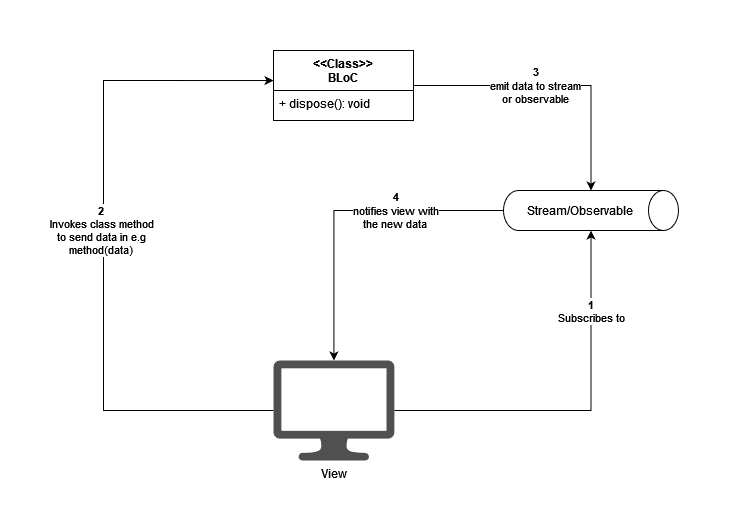 Now that we've gone briefly over the concepts of the BLoC pattern, we will attempt to implement it in an example todo react application.

this should create a folder called todo-bloc. Navigate to that folder and install the dependencies:

once done, we'll proceed by installing the RxJS package and the uuid package (we'll need it later):

we can now run the app in dev mode:

In our simple todo app, we will create the following sub directories inside the src directory:

To simulate a real world application, we will start first by creating a Todo interface, which all of the todo objects in our app will conform to. We'll create a Todo.ts file under the models directory and add the following interface: 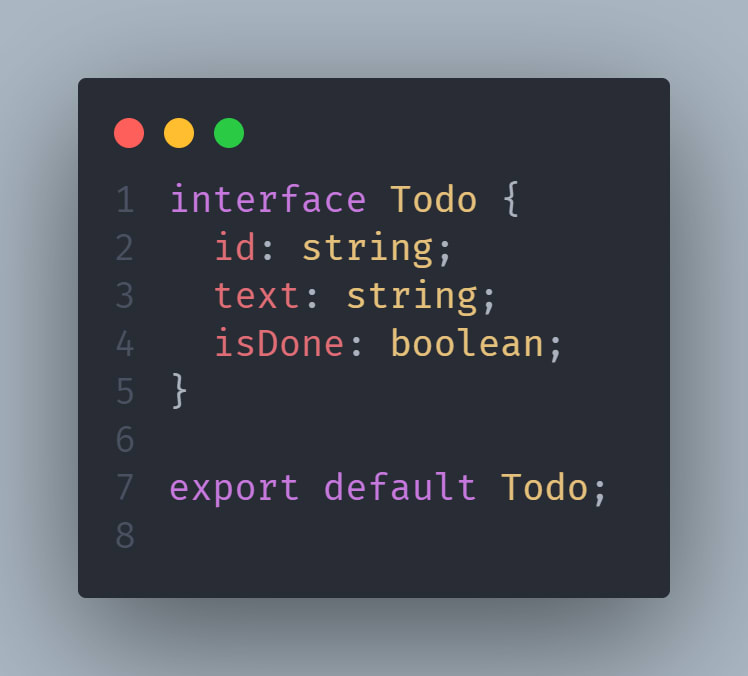 Secondly, we'll create the base bloc interface which will include all common methods/properties shared between the BLoC's in our app. Ultimately, we'll only need a dispose() method on the bloc interface as previously mentioned. We'll proceed by creating a Bloc.ts file under the models directory and adding the following interface: 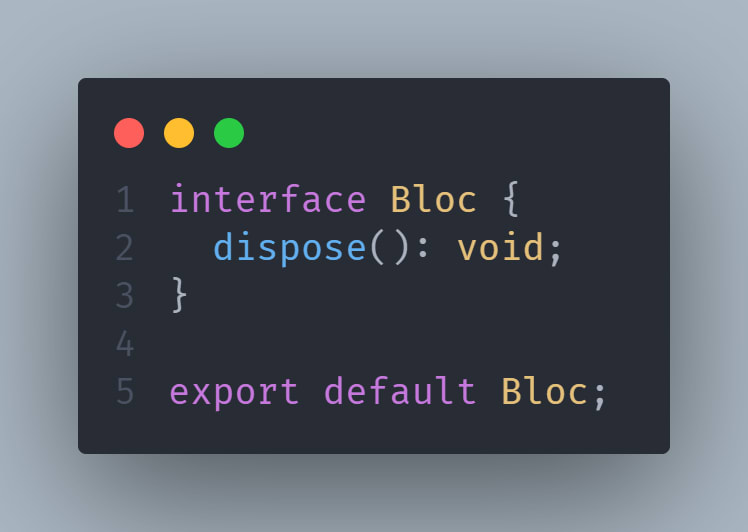 Now that we have the interfaces in place, lets start by defining our business requirements for our app. Essentially, our app should:

First off, we'll create a TodoBloc class that will implement the Bloc interface that was previously imposed. Ultimately, this class will live in a file called TodoBloc.ts under the blocs directory. To implement the first business requirement, we'll have to find a way to keep track of the current list of todo items. This is where Subject from RxJS comes into play. To recall, any data coming out of a BLoC should be through a stream/observable. To achieve that, we will create a BehaviourSubject that will hold the most recent list of todos, and emit new items whenever the state changes: 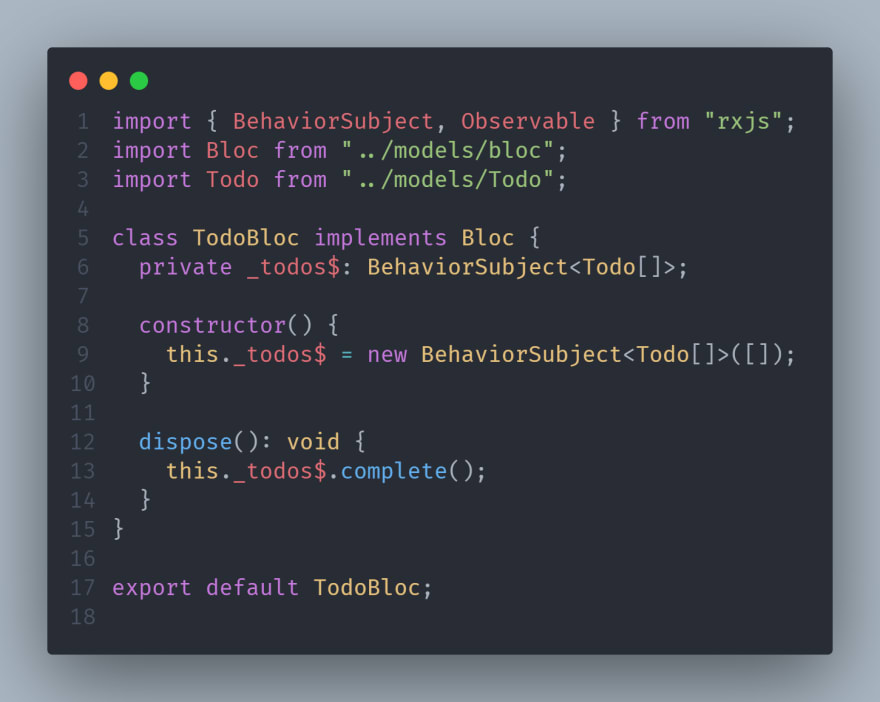 you might now be wondering, how are we going to expose the _todos$ subject to the view if the field is marked as private? good question. This is a bit tricky, because we don't want to expose the whole Subject to the view as we don't want the view to be emitting data directly to the Subject (we have to do it through a method as previously mentioned). Instead, we will create a getter for the _todos$ field that will only expose the Observable side of our subject:

To cover the second business requirement, we will create a method called addTodo, which will be responsible for taking in a Todo object and adding it to the _todos$ subject:

To implement the final business requirement, we will add a toggleTodo method, which will be responsible for marking the given Todo item as done/undone:

Explanation: toggleTodo accepts a Todo object as a param, gets the current list of todos from the _todos$ subject, loops over the retrieved list and toggles the given Todo item by id, and finally pushes the new todo list to the _todo$ subject. 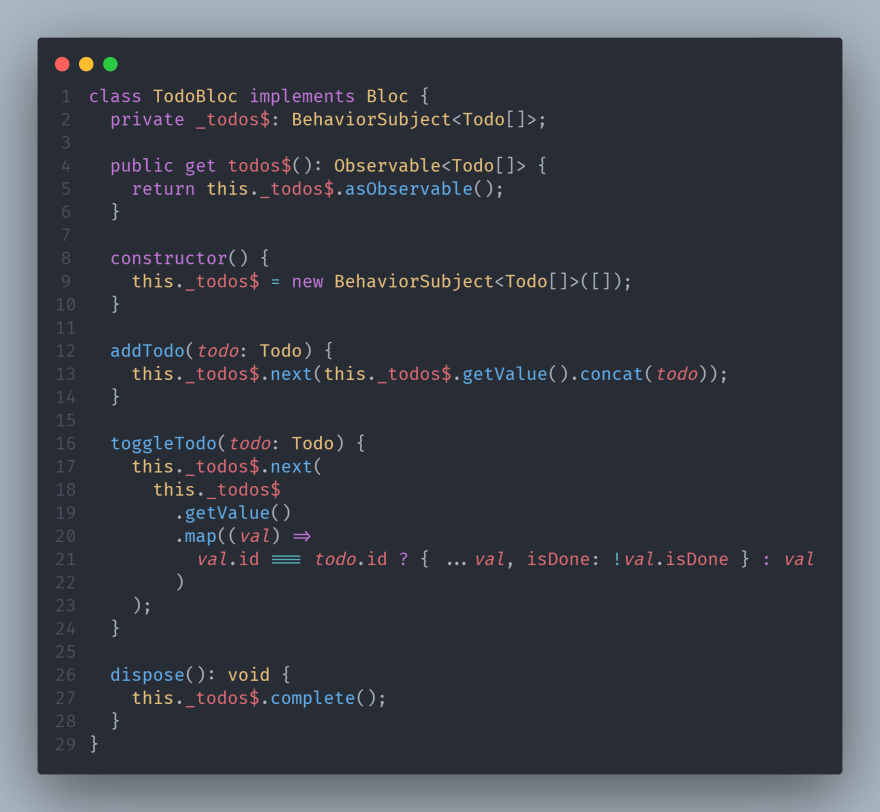 Now that we're done implementing our business logic, we need to start thinking of a way to connect our BLoC to the anticipated view in our app. We can facilitate this process by creating a custom hook that will have the following responsibilities:

Having these points in mind, we'll create a useSubscribe hook under the hooks directory to fulfill these responsibilities: 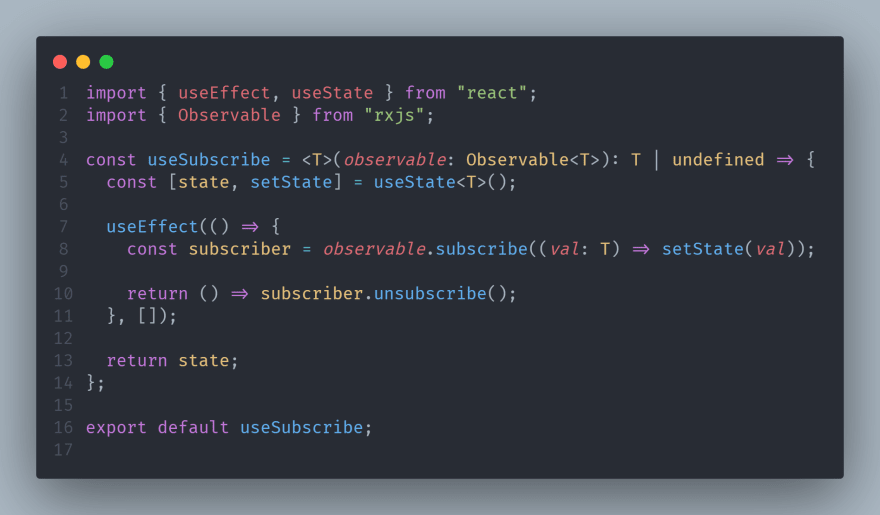 Explanation: useSubscribe accepts an Observable of a generic type as a param. A state is created to store the most recent value emitted from the given observable using the useState hook. We then use the useEffect hook to subscribe to the given observable on component mount and update the state with the most recent value. We also add a cleanup callback that will unsubscribe from the observable once the components unmounts. Finally, we return a copy of the state to the view to be able to effectively use it in display.

Now that we have everything in place, let us create the view to demonstrate how we can tie these all pieces together. First, we create a simple TodoItem component under our components directory to display a single todo item: 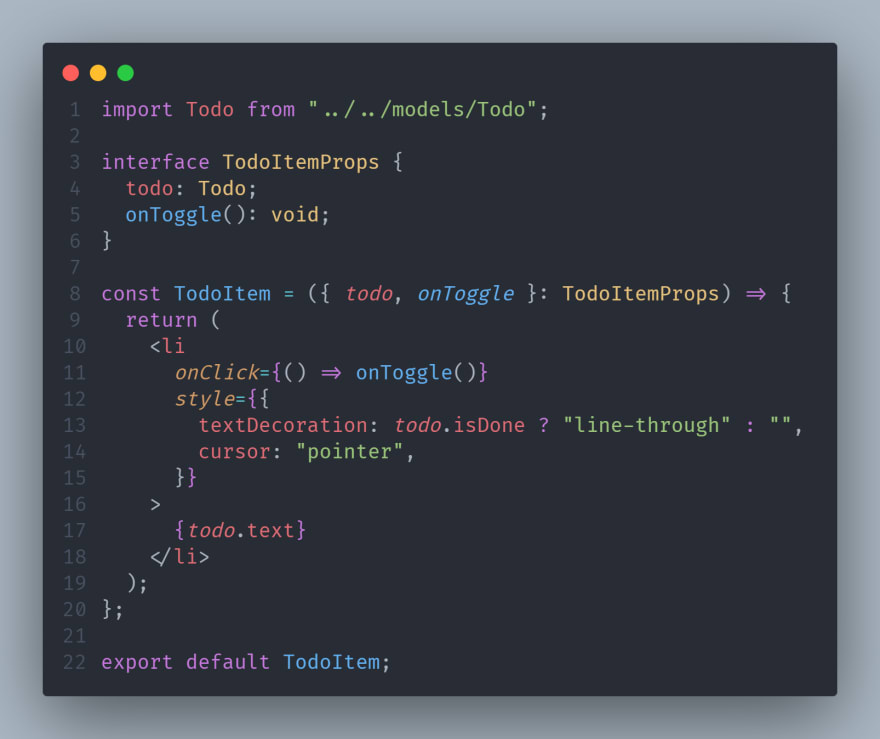 Explanation: the TodoItem component accepts two params - todo, which is the given Todo object, and onToggle callback, which will be triggered when the user marks the items as done/undone. The component displays the text property of the given todo in a li tag, and style is rendered according to the isDone property.

Finally, in our App.tsx file, we will tie all the pieces together: 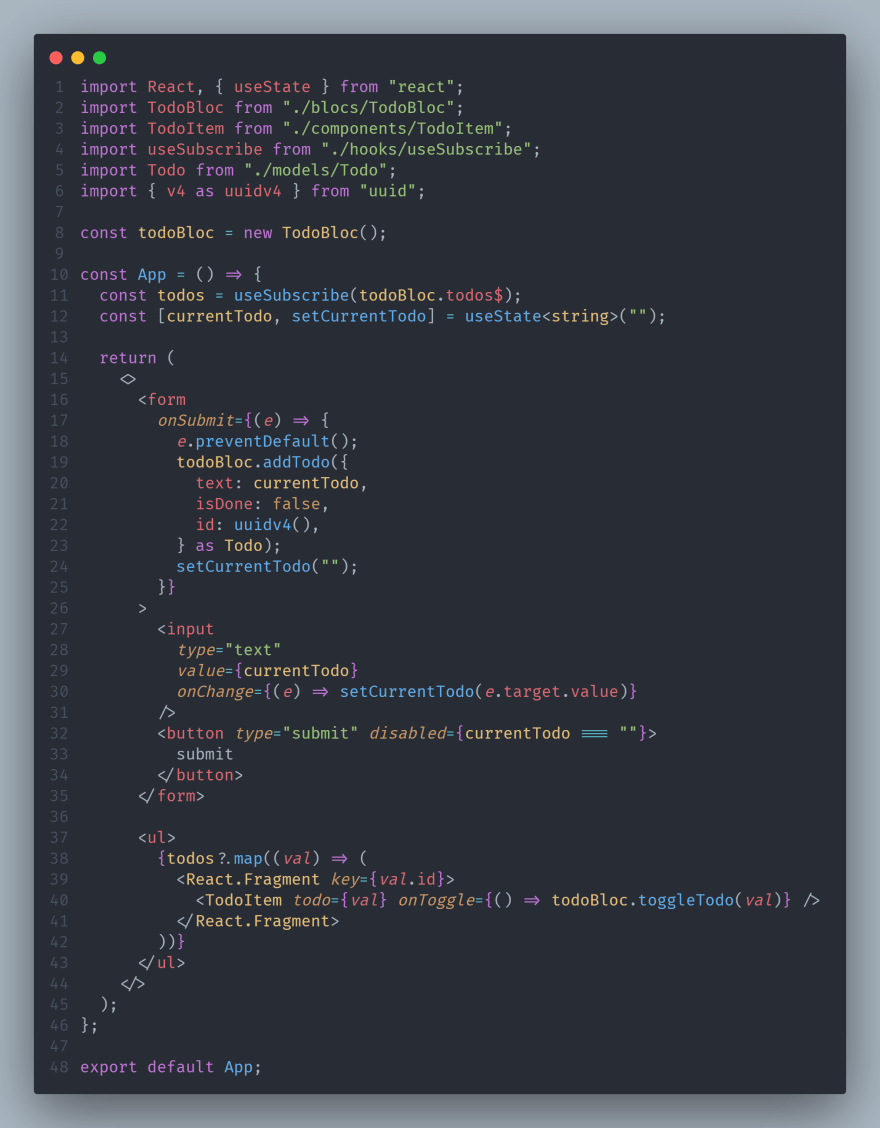 Explanation: we create an instance of the TodoBloc outside of our App component. We then consume the most recent value from the the TodoBloc by using the previously defined useSubscribe hook and passing the todos$ observable as a param. Now, the todo variable will always hold the most recent list of todos, and will update accordingly. To give the user the ability to add new todo items, we create a simple form with a single controlled input element and a submit button. On submit, the addTodo method on the TodoBloc will be invoked, and a new Todo object will be pushed to the list of todos. Finally, to display the list of todo items, we map over the todos list and render a TodoItem component for each given todo. Each TodoItem will be provided an onToggle callback that will invoke the toggleTodo method on the TodoBloc for each item, respectively.

The final result will look/behave as follows:

As your application grows, your number of BLoC's will grow respectively and you'll need to find a way to manage them cleanly. Multiple view components may consume a single BLoC and you'll need to find a way to provide it to these components. One way to go about that is to use the context api to provide a single bloc to multiple components. You may also want to look into the Singleton design pattern to preserve a single copy of a given BLoC within your app. You would also want to manage the disposal of each BLoC when it is no longer needed in your app (in our todo app, we did not call dispose() anywhere because the TodoBloc has the same lifespan as our application). Nevertheless, be flexible and reasonable with your design and do not over engineer your solutions. Happy coding 🎉!

Once suspended, karimelghamry will not be able to comment or publish posts until their suspension is removed.

Once unsuspended, karimelghamry will be able to comment and publish posts again.

Once unpublished, all posts by karimelghamry will become hidden and only accessible to themselves.

If karimelghamry is not suspended, they can still re-publish their posts from their dashboard.

Once unpublished, this post will become invisible to the public and only accessible to Karim Elghamry.

Thanks for keeping DEV Community 👩‍💻👨‍💻 safe. Here is what you can do to flag karimelghamry:

Unflagging karimelghamry will restore default visibility to their posts.