Hello fellow programmers 👋 In this article, we will walk-through the basics of generators in Javascript, which was introduced in ES6, and get across some real use cases.

What is a generator?

From its name, a generator is a function that allows you to generate one or more values by exiting and re-entering the execution procedure whilst saving its state (context) across multiple calls. To put it in simpler words, a generator is similar to normal functions, but has the ability to continue execution on demand at the point at which it was previously terminated, simply by saving its previous state. The following flowchart illustrates the difference between a normal function and a generator function. 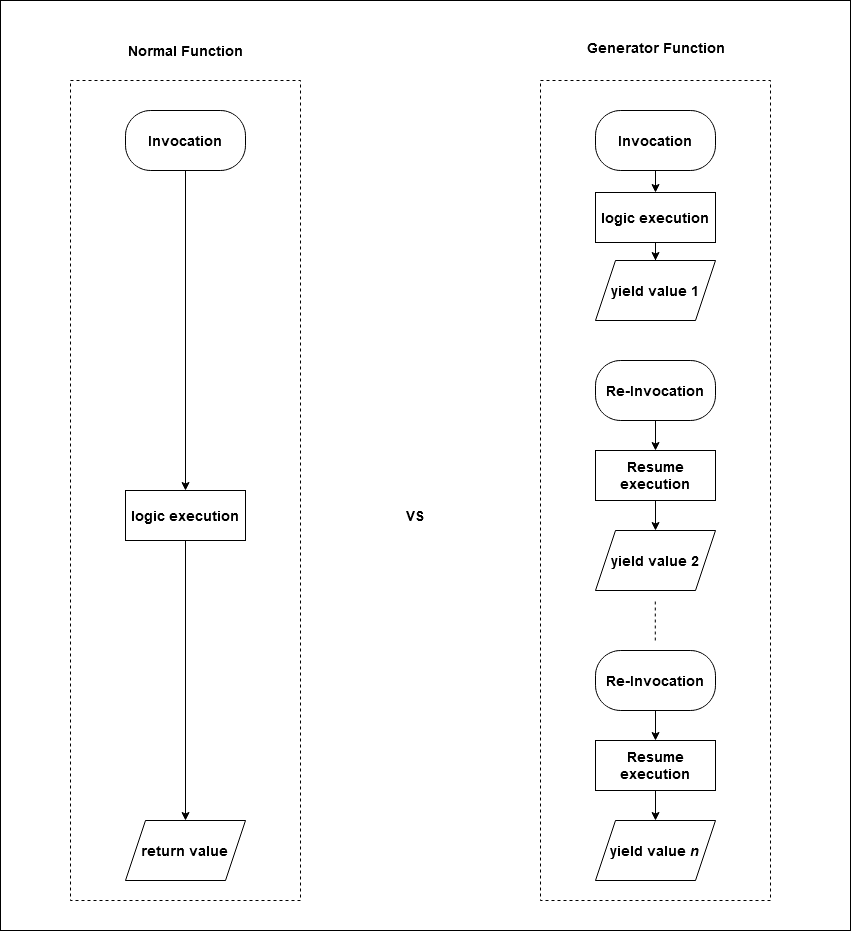 As you've already guessed, there are some syntactic differences between a normal function and a generator:

The first noticeable difference in syntax is that a generator is declared using the function* keyword instead of function. Also, notice how we use the return keyword in a normal function, while we use the yield keyword in a generator function instead, respectively. The yield keyword inside the generator allows us to 'return' a value, terminate execution, save the state (context) of the current lexical scope and waits for the next invocation to resume execution at the last termination point.

Now that we've covered the differences in syntax between both functions, let us see how does one invoke a generator and yield its values. First, consider the following piece of code which illustrates the invocation of a normal function:

In general, you can invoke a normal function by typing the function's signature followed by a pair of parentheses (). The previous code will output:

Now let's try to use the same procedure to invoke a generator. Inspect the following piece of code closely:

What do you expect from such program? Technically, we would expect that the function is to be executed until it hits the first yield keyword. However, the output of the previous program was empty:

that is because the normal invocation syntax does not actually execute the body of the generator function. Instead, it creates a Generator Object that holds multiple properties and methods. To prove this, we can try to print out console.log(generatorFunction()) and the output should be as follows:

So, the question is; how do we actually yield our values from a generator?

well, there are some important methods that belong to the Generator Object that we can utilize. The first and the most important method is called next(), which, from its name, yields the next value from the defined generator. Now lets modify our previous code to actually yield our values:

the output of the previous code is:

Let's inspect the output line by line. When calling the first foo.next() method, the generator began to execute until it hit the first yield keyword and stops the execution. This is reflected in the first two lines of the output. Notice how the foo.next() returned an Object instead of the actual yielded value. This Object should always contain the following properties:

Lets move on to the second foo.next() call. As expected, the generator resumes the execution from the last termination step and executes until it hits the second yield keyword, which is reflected in the third and fourth lines of the output. Notice how the done flag is still set by false, as it did not yet reach the end of the function.

On the last foo.next() call, the function resumes execution after the second yield keyword and finds nothing to execute, which indicates that we've reached the end of the function. At this point, there are no more values to yield and the done flag is set to true as reflected in the last line of the output.

Now that we've covered the basic concepts of generators in Javascript, lets take a look at some of its useful use cases.

Use case 1: Mimic the range() function from Python

According to the Python docs, "the range type represents an immutable sequence of numbers and is commonly used for looping a specific number of times in for loops." The range() function in Python usually contains the following parameters:

Basically, the usage of the range() function in Python is shown below:

what we need to do is to mimic this functionality in Javascript using generators. Inspect the following piece of code closely:

Lets take it step by step. Firstly, the function signature defines a generator that takes three params: start, end and step, in which start and step are defaulted to 0 and 1 respectively. Moving onto the function body, it contains a basic for loop that starts iterating from start inclusive till end exclusive. Inside the loop's scope, we yield the value i of the current number in the sequence.

Lets see it in action. The following piece of code illustrates different examples of the implemented range function:

In this use case, we will attempt to output a step-by-step execution of the Bubble Sort algorithm on a given array to easily visualize it. Briefly, bubble sort works as follows; given an array of length n and i as the current iteration, propagate the max(array[0:n - i]) to the index n - i repeatedly until the array is sorted. The default implementation is shown below:

Our job is to visualize the step-by-step comparisons and swaps that are carried out throughout this algorithm. This can be easily done using generators. We simply yield the current array after each iteration in the inner loop. The new function will be as follows:

This will yield the array for each iteration in the inner loop, showing us the current state of the array. Consider the following example:

The output of the previous program will be:

we can clearly see what is happening throughout the algorithm thanks to the implemented generator:

Note: this technique can be used to visualize any given algorithm easily. It can be very helpful sometimes.

In this use case, we will try to generate a series of distinct random numbers using generators. First, we would put some constraints on the inputs and outputs as follows:

Following the previous constrains carefully, we can implement this functionality using generators easily:

Briefly, the previous generator tries to maintain a pool of available integers to choose from. In each iteration, we randomly choose a number from this pool, then yield it and remove it from the valid pool. Theoretically, the maximum number of generated integers should be equal to limit and all generated integers must be distinct. We can easily proof this by exhausting the implemented generator until the end of execution:

Generators are a great addition to ES6 which provides a solution for multiple problems and use cases. You can use them anywhere for sure, but I would suggest looking into alternative solutions for the problem in-hand before settling for a generator, as they can introduce more complexity to your code as well as they can be hard to debug at times. Nevertheless, happy coding 🎉

Internet Explorer retires on June 15 - what can developers do?