The code below is using a select element for picking a City. The options presented to the user are a list of all Cities in any given State.

The bindings for the select element are shown below.

The triad of #city,[(ngModel)] and (ngModelChange) allow for two-way binding. When onProperyChange fires the ngModel named city is seen.

When our input control first loads, the ngModel is bound to the address.city property. The default value for address.city is "undefined". After the user makes a selection, this is what is shown for the NgModel. 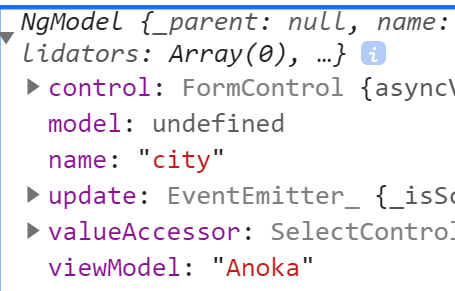 The 'viewModel' exposes the current change. It's the same value as is found in the control's value property and always tracks that value.

In the image above we see a value of "undefined" for the "model" property. The model property is always the "last" known value for the binding. A nice way to revert changes should something go wrong.

ngModelChange will always fire before the pipe does. Here we add a pipe named 'cityPipe'

Changes made via the pipe will not re-fire the NgModel Change event! This allows the actual value of address.city to be different than the displayed post-pipe action. This is especially useful for hiding values in the view.

Next up: Using Validation Patterns with ngModel.

How to Setup Next.js with Typescript