Let's look at building a twitter bot that scrapes information from one part of the web and then spits it out on twitter. There are a few good examples if you want to generate ideas for a twitter bot such as @bbcbweaking, @poemexe and my own @rnghaiku. In this example we will write something that simply finds the first dev.to post and tweets the title.

Webscraping is one of the most powerful tools that a coder has and it's the first thing I look to do in each language that I touch. we will be using beautifulsoup for this and you can install it from your terminal with the following:

Create a new .py document and add the following lines to the top in order to import all the functions that beautifulsoup (which I will refer to now as bs4) has for us:

You now need to define the page you want bs4 to open which you can do like this: 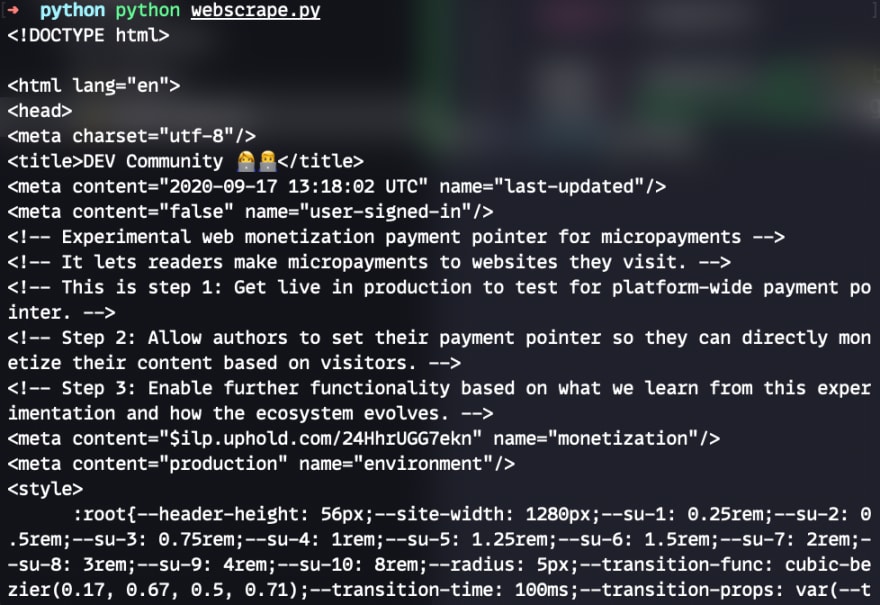 Now we are loading ALL the html from the dev.to which is neither readable nor tweetable. We now need to refine our search using the built in "find" function from bs4. In order to find the titles of each post we need to dive into the HTML of dev.to. We can do this by either reading all the HTML (boring, long, painful) or simply use your favourite web browser to do the same. 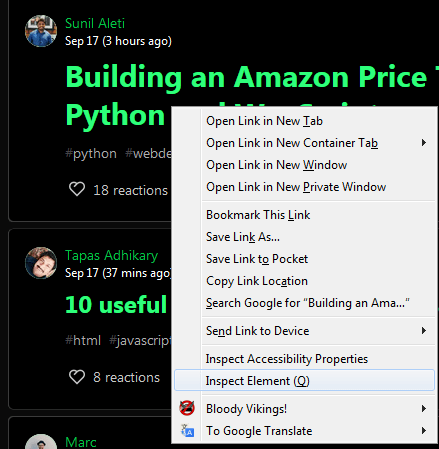 We can see in the DOM above that each title is buried under several HTML classes and ids. In order to get to these we're going to have to dig through the elements in order to return an array of titles. We can do it like this and I will explain later:

Now lets go through each line of code in order.

These open the HTML page and returns the result as a bs4.BeautifulSoup object. We can then find objects within this soup of HTML with the following:

For every post in the list of posts we search for the h2 with the class of crayons-story__title and print the stripped title for it. This is the purple section of the highlighted DOM. If everything goes correctly you should see a list of posts like this: 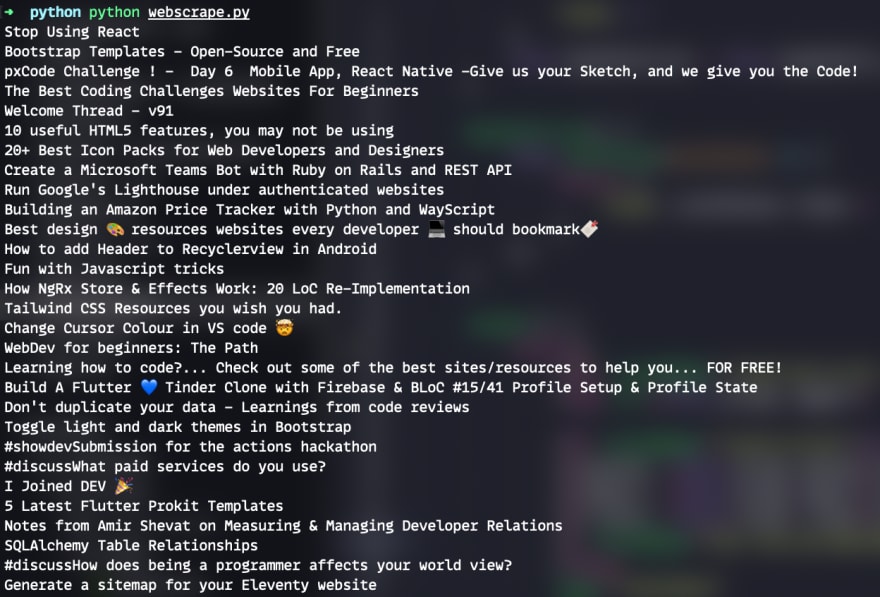 But obviously we only want the first one of these so we can just do the following:

Which in my case returns the Stop Using React post. For selecting other elements such as <a href="foo"> tags please check out this tutorial from compjour.

Anyway now we have something that we want to tweet (which can be any string or even images) we can now look at tweeting.

For this we will use tweepy whose documentation is equally as strong and useful as bs4's and I recommend that you check out. Install in the usual way:

and now we need to set up a twitter app for your bot to operate in. You can do this by going here and creating an app and filling in the simple form, confirm your email then you will have to wait for your developer application to be confirmed. In the meantime, before we get our API keys, we can do some more work on the tweet we want to send.

There's a lot going on here so let's slowly go through it. The tweet function that we wrote will take one argument of 'top post' which is what we figured out in the scrape section. The consumer_key, consumer_secret, access_token and access_token_secret are all API keys provided to us by twitter and should be some long, unreadable string. To learn what these tokens actually do I would recommend that you check out the tweepy documentation.

Once you receive the email confirming your API keys be sure to copy them into your function so they function as expected.

Once all of this has been completed we can host our bot on AWS or my personal recommendation heroku. For a good guide on hosting a bot on heroku please check out this great article from data_bae. Now just run your app and let's see what you get!

I, of course, advocate using React as I have the hopes of getting a job in Berlin where React is dominating the job market so I will have some explaining to do in my twitter later.

How to use Spotify API with Next.js

Upload Files to S3 Object Storage (or MinIo) with Express.js

joseph
Berlin based geek.
Monitor your internet with python
#python #tutorial #beginners
What is your go-to Emoji on tech twitter?
#discuss #twitter #tech