This lesson is a companion to my Twitter ✨Intro to Swift✨ crash course - Check it out! 👌

Are you a #CodeNewbie or have you always wanted to learn #SwiftLanguage but never got around to it?

With this lesson, I'm also giving away 1 copy of Hacking with Swift (author @twostraws)! Just RT & follow for a chance to WIN! 🎉

The lesson introduces you to the Swift programming language and mainly covers constants and variables and the print statement.

Objectives for this lesson:

The lesson concludes with the following Challenge:

Create variables and constants for various parts about you, such as your name, your hometown, your favorite color and food, and anything else you think someone would be interested to know about you. Think about which of these should be variables, and which should be constants. Try to come up with at least 8 constants and variables in total.

Print each of these using print() statements and inserting the variable or constant in the parentheses.

Learn to use Xcode to create a playground

To start a new playground, open Xcode and select "Get started with a playground." Don't have macOS or Xcode? No worries, head on over to repl.it 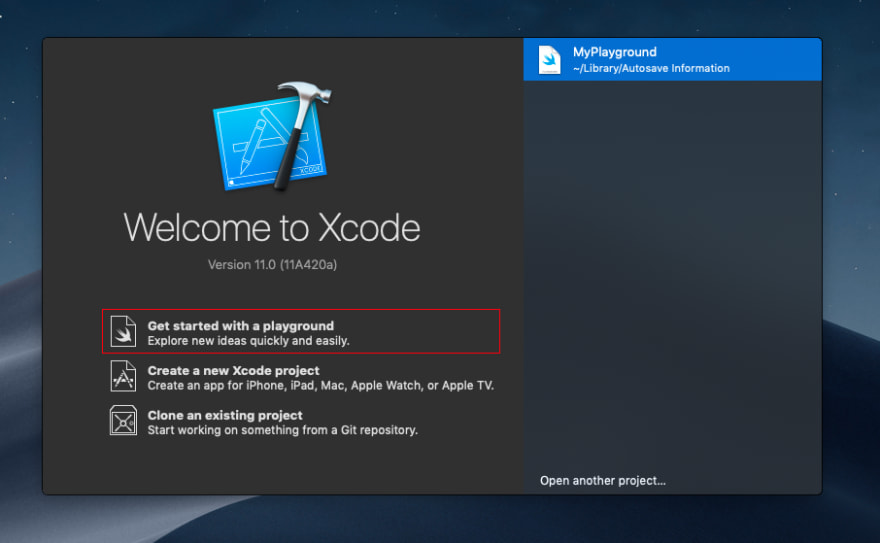 Learn to use print() to output text to the console

In its simplest form, a print statement looks like this:

In Xcode, the print() function prints its output in Xcode’s “console” pane, as seen below. 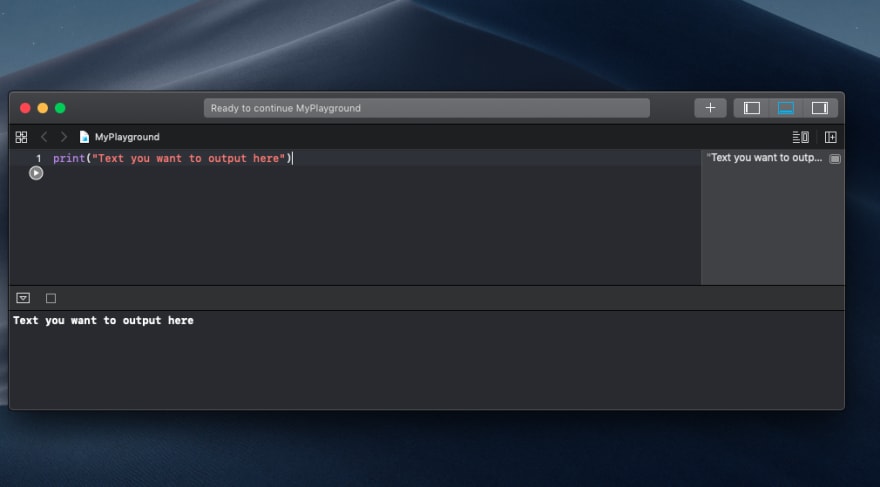 Learn to use constants (let) to store values

Constants associate a name (such as numberOfPizzaSlicesEaten or welcomeMessage) with a value of a particular type (such as the number 4 or the string "Hello"). The value of a constant can’t be changed once it’s set.

Constants must be declared before they’re used. You declare constants with the let keyword:

This code can be read as: "Declare a new constant called numberOfPizzaSlicesEaten, and give it a value of 8."

A note about naming: You can name constants anything you like, with a few small restrictions. The biggest one to remember is that constant names can’t start with a number (though they can contain a number elsewhere). The names you choose for your constants are important. Writing code that is easy for you (and other humans) to read and understand is a vital part of being a good programmer. So choose names that are concise but very clearly convey the purpose of a constant. You should avoid the temptation to abbreviate names. An example of a poorly written constant:

You may understand that "Za" means "Pizza" - however, it may be difficult for another person reviewing your code to understand the reference. Also, no self-respecting person uses "za." 🍕

Learn to use variables (var) to store and change values

Here’s an example of how constants and variables can be used to track the number of pizza slices a user has eaten:

Learn when to use var vs let

You might think that always using variables makes sense, because you can change them if you need to, or leave them the same. In fact, many languages don’t have constants, and only use variables. However, this is not a good idea in practice.

In fact, as you read and write more and more Swift you’ll notice that variables are actually quite rarely used. As a rule of thumb, you should always make your values constants with let. If, and only if, you actually need a value that can change, should you change your value to a variable.

Learn to use different types of variables and constants, including Int, Float, Bool, etc.

Normally, Swift is able to figure out, or infer the type of a value based on context. It’s clear that 42 is an integer, or Int, not a string. Similarly, “Hello” is obviously not a number, it’s a String. This feature is called type inference and is one of the things that makes Swift concise and nice to write.

This example provides a type annotation for a variable called typeOfPizzaEaten, to indicate that the variable can store String values:

The colon in the declaration means “…of type…,” so the code above can be read as: “Declare a variable called typeOfPizzaEaten that is of type String, and give it the value "margherita".”

The phrase “of type String” means “can store any String value.” Think of it as meaning “the type of thing” (or “the kind of thing”) that can be stored.

There are actually multiple number types, including Int, UInt, Float, and Double. Int is short for integer and is a whole number that can be either positive or negative. UInt is an unsigned integer, and is a whole number but it can only be positive. In other words, it can’t have a minus sign. You’ll see both types used in Swift, but Int is more common, and is the default. Float and Double are both kinds of floating point numbers.

Floating point numbers are numbers with a decimal point like 3.14. The difference between Float and Double is their precision, and the maximum value they can store. Double is more precise and can store larger numbers than a Float. However, it also takes up twice as much memory space as a Float. You’ll see both types used in Swift, but Double is more common, and is the default. 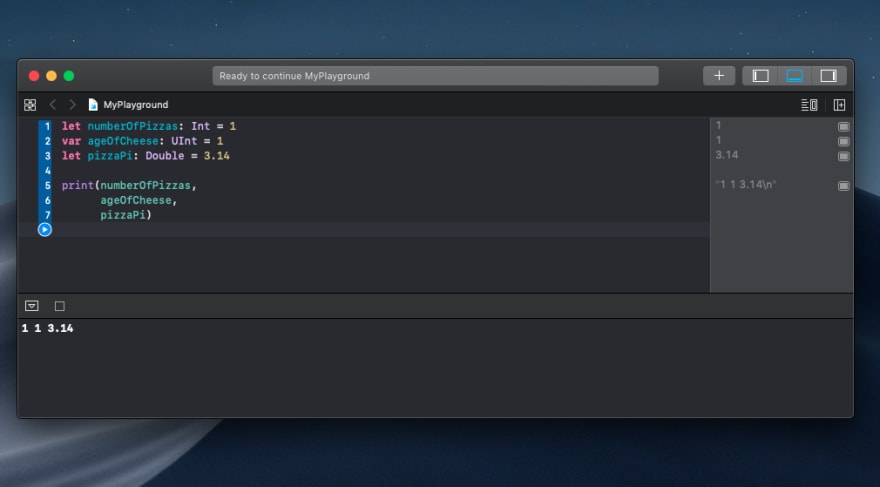 Another common type is Bool, which is short for boolean. Boolean values can only be either true or false. We could create a boolean variable like so:

Let's put our knowledge of constants, variables, and type annotations together, and see if we can complete the Challenge:

Create variables and constants for various parts about you, such as your name, your hometown, your favorite color and food, and anything else you think someone would be interested to know about you. Think about which of these should be variables, and which should be constants. Try to come up with at least 8 constants and variables in total.

Print each of these using print() statements and inserting the variable or constant in the parentheses.

Give it a shot before scrolling down! 😉

Create a constant called introduction. This should be a readable sentence or paragraph that includes all of the constants and variables you made and combines them into a single string.

Hints: Look up string interpolation in Swift to learn how to turn variables into text. Google is your friend here. 😉

Note: We will cover string interpolation in detail in a later lesson, so don't worry if you don't already know it, or find it confusing at first.

You can find more by following me on twitter 😄: @joshuarutkowski

Who can be a Programmer?

Enhance your JS Skill by using the correct array method

A Note to Devs Looking for Their First Job

Why You Should Learn JavaScript As Your First Programming Language