One day whilst our app was running in the QA environment we saw what you see on the left half of this graph, let me explain the lines and what they mean

There are two apis in play here, let's call them Api 1 and Api 2

Note: Before I continue I wanted to make a few notes:

Absolute MAD shoutout to Jetbrains, I am in no way affiliated with this company, but I used theyre tools (paid for by he company I work for). They have a suite of tools to help with coding, memory, performance.

If you've never heard of Resharper or DotMemory or DotTrace, or even DotPeek that decompiles code you are doing yourself a HUGE disservice as a .Net developer, please if you take ANYTHING away from this blog post go check these guys out

So let's actually start talking about things shall we...

At the very left of the graph on the top of this post we can see the memory utilisation of both of the apis were climbing steadily.

We had absolutely no idea, it was a big REST based API so we were at a loss for any suggestions, so we decided to spin up a task to investigate.

Now for the very few of you that have worked with me or know me in person i despise this type of story, because in my opinion there are

The issue with timeboxing

I often hear that "timeboxing" can be the solution here, which is esentially let someone look into it for x amount of hours or days depending on size.

But my question is... What if you can't find the issue? What if you just end up chasing ghosts for all or most of your time? Or even worse, what if your on the verge of making a breakthrough do you follow it through?

It's just so hard to judge.

This is not an excuse for my abilities, but I will mention here that I was pretty new to the codebase at the time of looking into the issue and felt that someone ele woul have been better positioned to investigate the issue, but timing and cicumstance landed it at my doorstep. So I rose to the occasion.

I think this is an important lesson to take away - you can make all of the suggestions, potests and objections in the world, but sooner or later you will have to like it or quit. You have to ask yourself "is this worth quitting over" and sometimes it is, if it's unethical and you believe that the company is legitemately not taking into account your perspective then it may be time to move on.

In my poisition this was not a hill I wanted to die on as this was only a small objection that I had, so I began where I knew best - jetbrains tools.

I am a massive proponent of resharper, I think it helps tremendously with coding, testings, refactoring. I think if I could work anywhere I would work with this team as the things they are doing are truely amazing.

Jetbrains have a tool called DotMemory that bootstraps your application and creates snapshots of memory and what objects are taking up memory.

Now I have to admit that I was a complete novice with this tool and let me tell you it was pretty daunting, but let's take a bit of a look: 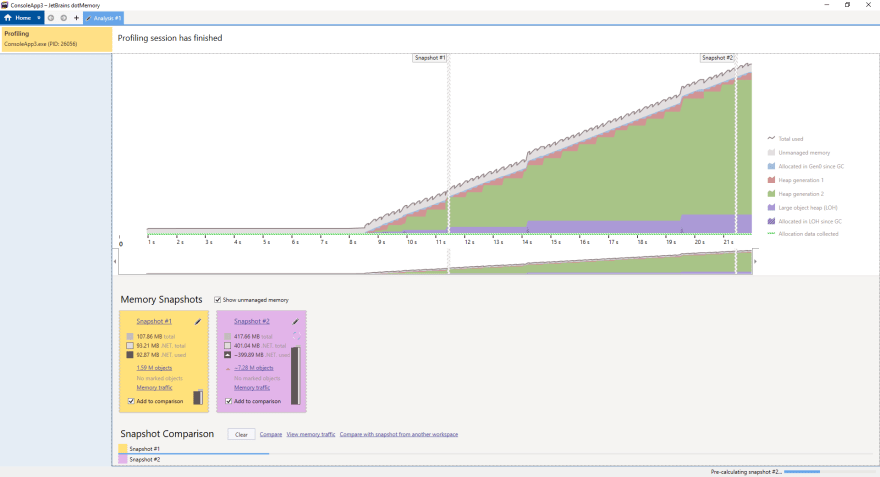 This is the screen that greeted me, and immeditely I was confused. Thankfully the team has produced a sample of how to find a memory leak: https://www.jetbrains.com/help/dotmemory/How_to_Find_a_Memory_Leak.html

And trust me I had to read this 100 times to understand what I was looking at: 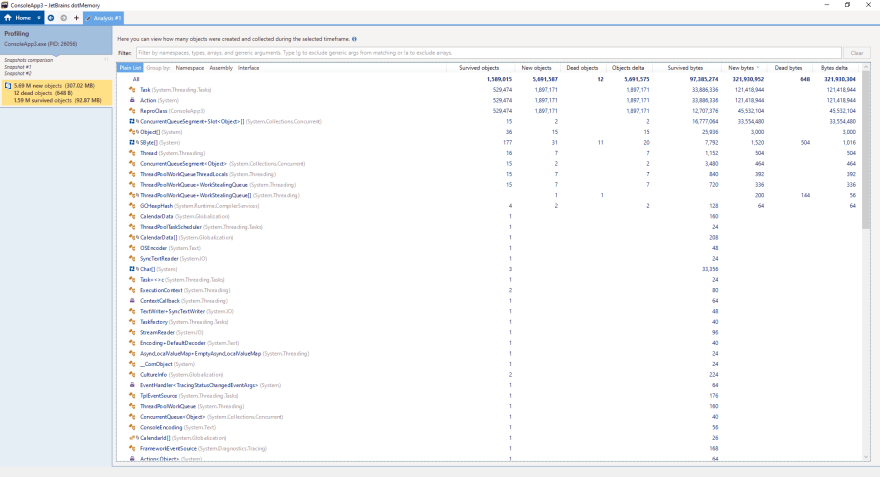 haha, this particular visualization was on my screen for a entire day, back and fort with the tutorial and the code I was debugging.

So let's talk about what these things mean for a second:

Fo now let's roll with this information, this was not the case in the actual use case I had but we can see that the top type of survived objects was Task, hmm, that's a little strange huh?

But how do we know what's going on? 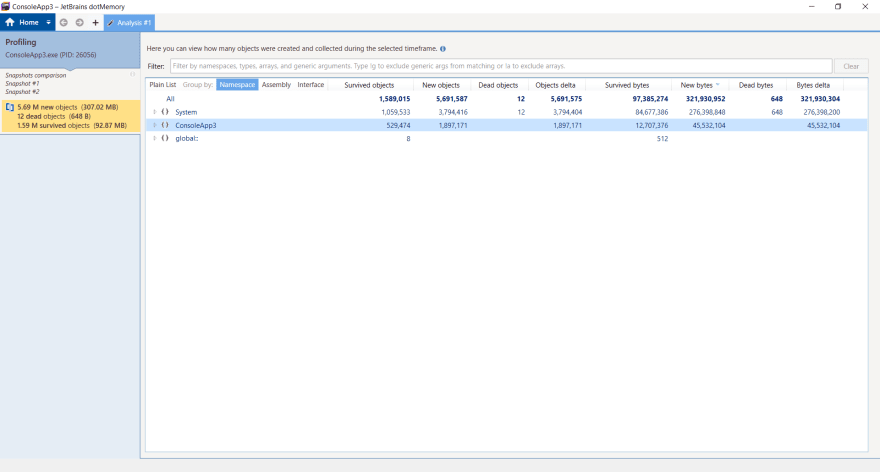 Oh that looks so much better - we have sorted the information by namespace and can see that there are quite a few survived objects in System, that must be the Tasks that we saw before,let's ignore that for now, as this is external to us.

ConsoleApp3 huh? Well that's the name of my application, what's that doing with so many survived objects, lets dig in! 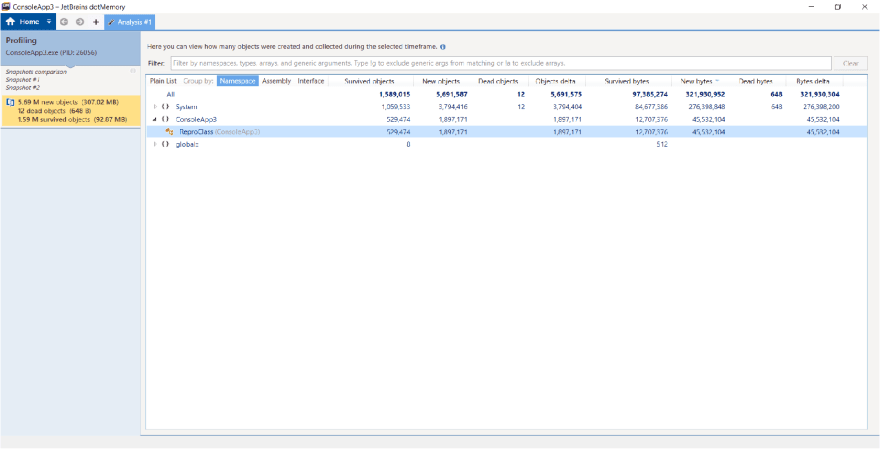 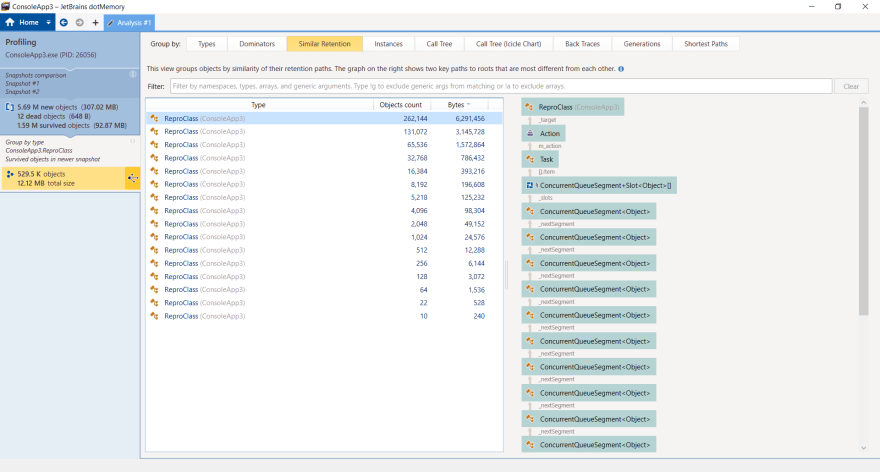 This is where the knowledge of the code comes in.... let's take a peak:

Okay for people who can see it, this is the most obvious thing in the world. For the sake of everyone else let's step through what is happening:

But if we look at the Repro class we see that is has quite a weird constructor, it produces a background thread.

So every time we create a repro class we create another background thread and never get rid of it!!

So we can add a token to our thread :D and make our class disposable:

Now when the garbage collector comes along the token will cancel the background thread and we will no longer get the memory issues we were getting before.

Let's look at the graph

If you look at the right hand of the graph after we implemented this fix you can see that it is no longer increasing in memory.

Thank you for reading, I hope you learned something, thi was a lot of fun to work on but it gave me multiple headaches

and thank you Jetbrains, I know no one from their team will ever read this blog post, but your tools are amazing!

The Best Terraform Feature Yet?

We Solved Dev Infrastructure, So Why Does it Suck to Build Stuff?