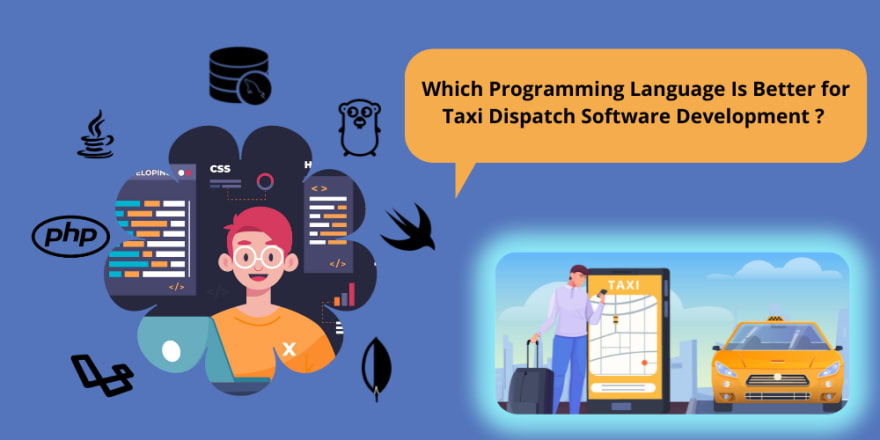 The programming languages are the vocabulary and a bunch of rules that instruct a computer, app, software, web panel, etc. how to work. There have been different languages to choose from. They enable the developers to code programs according to client requirements on a specific digitized platform solution like a mobile app for the business.

In which, we are going to see the top two program languages, Swift and Java, to develop taxi dispatch software that is too trendy and too achievable to the latest mart.

Swift and Java in Technology Stack?

Both Swift and Java are different programming languages and are mostly used by developers all around the world. Swift is a high-level language just like Java, it would be used for developing iOS apps while Java for others. Their individual interfaces and protocols are almost the same. Java could be used for different stuff, development purposes, the Android app is one of them.

As both languages could be used for mobile app development on different OS platforms, they sustain stable connectivity between app development service providers and their clients. Most of the well-known development companies are still using the languages for custom-satisfying app creation services.

The Part of Swift in the Development Field Today?

Being Swift is a fast and efficient language for development, programmers find it great to use for creating iOS business apps. Right from its real-time feedback to seamless incorporation into current Objective-C code, you can quickly provide client-centric apps for real-time startup launching. Utilizing its dynamic library, as a developer, you can provide your clients decreased app size for upgraded app performance and speedy loading.

Some winning example apps developed from this easy-to-use and open-source code language are Uber, Lyft, and Airbnb. This cross-platform nature is compatible with Linux too. Its playground offers developers to try new implements and discard when not okay. So, you can immediately import new features as requested by your client from his business plan for workouts.

How Swift Has Still Evolved in Taxi App Development?

Since Swift was introduced by Apple, it has been evolving and modifying continuously. It is a free and open-source language that could be easily learned by anyone. Its complete upgrading from its version 2.0 to 2.2 to 2.6 to 3.0 to 5 made the programming language great and true to itself. Its improved frameworks like GCD and lib dispatch make concurrent programs too easy at the developers' end.

Though Swift is highly focused on security, it is widely used for the purpose of data safety. The elimination of specific classes by the high-tech program language solution allows entrepreneurs to provide a secure platform for their app users. Along with much such greatness, the key reason for the language’s mass evolution in the development field is cost-effective solutions could be given to your customers for high productivity.

How is Java Nowadays?

Java, the object-oriented programming language, assists you to develop multiple platforms regarding service businesses. While you write programs in this language, the compiled byte code runs in different operating systems (OS) which include Android, Mac OS, Windows, etc. It deduces a lot of its syntax from the C and C++ program languages. Java offers a number of APIs for developing on-demand taxi service apps.

Because the Java programming language is linked with concepts like class, object, abstraction, inheritance, encapsulation, etc., it allows you to easily develop a pre-made taxi business software solution for business. Its integral portion of design ensures its robust security to the service app usage. The perfect mobile program still holds its ranking in 2nd place on global developers as they use the language in maximum for developing mobile apps.

Why Do Programmers Use Java the Most?

Which One is the Best for Taxi Dispatch Software Development?

When it comes to an argument on which one Swift or Java is the best for app development processes, the result would be concluded as both. Both programming languages are important to develop a successful taxi dispatch software app supported with multiple OS platforms.

Consequently, it assists you to provide an achievable app design with the arguable React Native (JS), based on Javascript the app developers offer fundamental building blocks which work in both iOS and the Android platforms. Applying all their advancements, you can build a complete scalable app for businesses apt to the existing taxi service marketplace.

App development for business should be comprehended with client expectations, market demands, adaptable solutions, etc. to make the entrepreneurs fully satisfied with your services. Taking it into consideration, as an individual developer/organization/company, making use of both Swift and Java programming languages to build your taxi dispatch software brings mentioned advantages to your service.

Johnmarison
I am a Graphics Designer at SpotnRides
Which One is The Best Tech Stack Spring-Boot or Laravel for UberEats Clone App?
#laravel #appdevelopment #springboot
Essential Features of Gojek Clone for On-demand Multi-service Business
#swift #mongodb #ondemandmultiservicebusiness