Unit tests are great as part of a testing strategy because they run quickly, test for functionality and even work as a form of documentation on expected behaviour. (More troubling though, is what to write them about? See Ian Cooper's talk on "TDD: Where did it all go wrong?")

Recently I came up with a testing strategy for a project on an aggressive deadline I couldn't fulfill. In fact, I didn't know how deep you could dig into validating that components behave the way they should!

Basic testing on components in Storybook are two-part:

This article focuses on the first.

@storybook/addon-jest is an add-on package you can add to create reports on the number of suites that passed or failed in a JSON file.

Coupled with withTests decorator in preview.js/.ts, non-technical users get to preview whether tests passed or failed in the add-ons panel:

(PS: you need to add a script like "test:generate-output": "jest --json --outputFile=./src/.jest-test-results.json || true", to package.json to create the results .json)

Here's a look at all the setup files I created to test a set of components that would be used in Gatsby static sites: 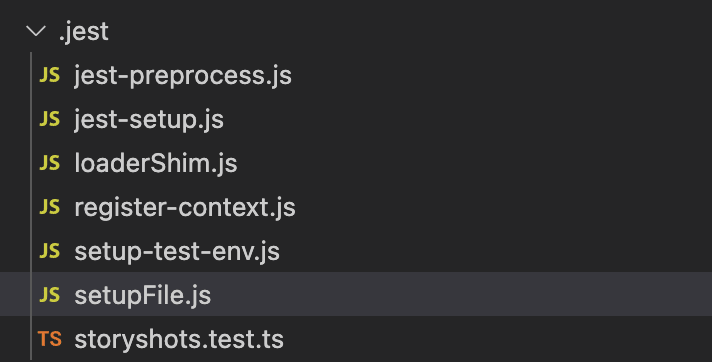 All components with stories can have corresponding .test.tsx or .test.js files.

There's 2 ways I've seen folks approach testing in Storybook with React, neither of which I can really interpret as "better". Both use @testing-library/react, which is built on top of Jest.

I'm slightly puzzled since frameworks like Jasmine/Karma advocate for creating a copy or instance of the component to test against to avoid using the "original" component or making a real API call. Either way, it seems to work out fine.

Let's say for example, we want to show a primary and secondary button in the space of one story:

Each story will define a component state or variant for use in unit tests.

Of note: const Template is locally scoped such that the template for each story does not become a named export of a story. If you wrote export const Template it would actually show on storybook as a component state, and a very web-1.0-looking component unless you give it default args.

The CSF approach to writing stories creates opportunities to reuse stories for unit tests. The arguments for different button types stay with the story with the component that is being tested.

As I try to write unit tests, the part I find the most confounding is covering aspects that are purely functional, and then the ones that are visually expected as behavourial.

expect(renderedComponent).toBeDefined() is not really that meaningful for checking expected behavior. With each type of component input I've found different challenges in terms of mocking the expected content or response, stubbing in an image, or spying on component functions.

As Varun Vacchar puts it: "Unit tests don't have eyeballs."

We don't have a way of knowing whether the change that happened is a reasonable deletion, a regression or merely a change. That's where visual snapshotting comes in.

If a component begins to have more than 5 tests, you may consider including integration or e2e tests.

Don't Forget The Role of Linting

Having built in linters help monumentally with a11y needs, ES6/7+ conformance and even not breaking the build on pipeline when it runs on CI!

useEffect hook from the prespective of a noob