In the last posts of this series we setup locust and made some basic performance tests to test the ownCloud WebDAV-API. This time we will try to make some sense of the locust output.

Here is the locust file we are using:

and then started locust with: locust --host=http://localhost:8080 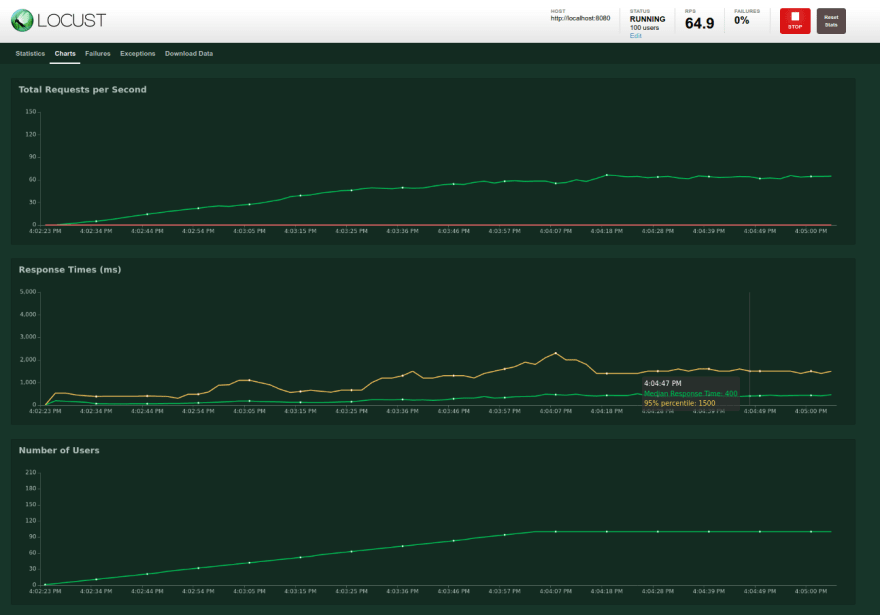 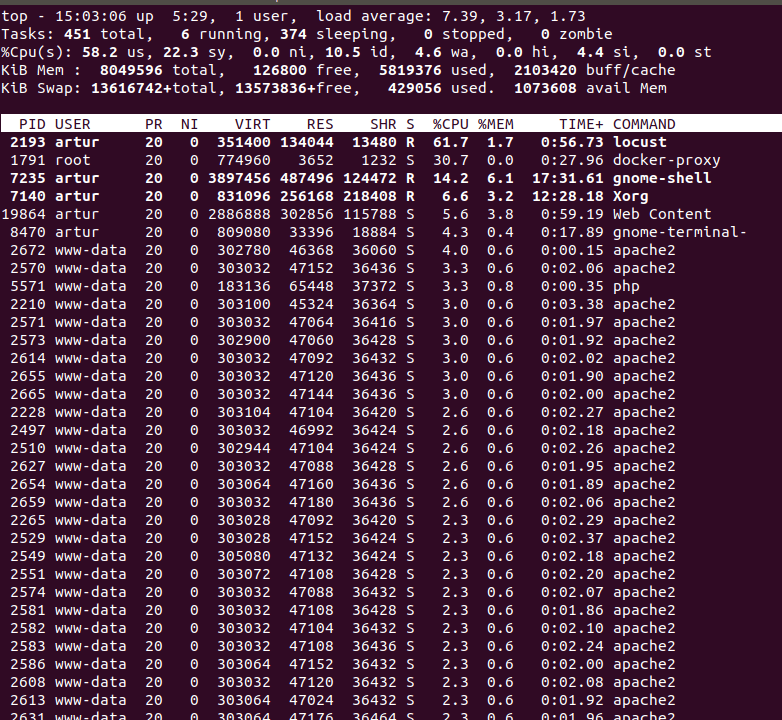 WOW, 61.7% CPU is used by locust itself. I'm not really testing the performance of ownCloud (or not alone). Beside locust gnome, X and Firefox are eating up a significant amount of resources, so the results will never be accurate. Better get some dedicated hardware to run ownCloud on.

I have here an old Lenovo X201 Laptop (i5 M 540 CPU @ 2.53GHz; 4GB RAM). Not really fast, but should be OK for this example. I will run ownCloud on that Laptop and locust on my workstation. That way hatching 100 users still eats up the same amount of resources on the workstation, but because its fast enough that should not be the limiting factor. We really don't want the test-runner computer to limit our performance tests. If you don't have a computer that is fast enough to fully load your SUT (System Under Test), you can run locus distributed and that way utilize multiple computers to fully load your SUT.

In the response-time graph the green line shows the median response time and the yellow one the 95th percentile (95% of the requests finish before that time).

To calculate the current response time a sliding window of (approximately) the last 10 seconds is used see: get_current_response_time_percentile function.

As you can see, the median response time goes up as we add more users. And there is a "bump" in the 95th percentile line every time new users are created. So it looks like user creation is "expensive". (The "bump" is also visible in the median-line, but not that obvious).

BTW: Because there is always other stuff happening on the server its always good to run performance tests multiple times and see if you get similar results.

Would it be acceptable for your application to let the user wait for 3sec or more for half of the requests? If not, you need to optimize the software or buy more hardware.

To see more details and maybe make more analysis download the CSV data and open in a spreadsheets app.
These files have one line per request type & URL, because we have the username in the URL, there will be a lot of lines.

Be aware that this list will now hold ALL the results, from the time when we had 20 users, 50 users and 100 users, so if we want to know the average response time of uploads with a particular amount of users, we would have to rerun the test with a fixed amount of users and not change it in between.

When we have started the ownCloud docker container, it created an database and for that it used SQlite database, that is good for quick testing and evaluation, but its soooo slow. Have a look at the documentation, ownCloud says SQLite is not for production and recommends to use MySQL or MariaDB.
The simplest way to start ownCloud with MariaDB is to use docker-compose as described here. In addition you also receive a Redis server, to do some caching.

More tests showed that with 15 concurrent users there is still 20-30% CPU time left most of the time, but with 20+ users the CPU is basically flat out.
Another interesting finding is, that in the area around 15 users the CPU is still not fully utilized, but the hard-drive works already pretty hard (see iotop). My guess is that when running with <= 15 users a faster hard-drive, e.g. a SSD would improve the performance, but with more than 20 users an SSD would be a waste of money, because even if the data would arrive faster at the CPU, it struggles to do its calculation.

Let's see if we can prove our assumption that ~15 users should be the max for our system. I'm simulating 30 users, but with a hatch-rate of 0.025 users/sec (I want to give the system enough time to create the user and to refresh the sliding window for the chart after user-creation).

Looking at the graph I see that up to ~10 users the median time does not change much (160-180ms), looking at the output of top at the same time I see that there is still a lot of CPU time unused and even with 14-15 users, the median time goes down to 190ms. After that pretty flat area in the graph, it goes up pretty steep, the CPU is totally flat out.

Also have a look at the "Total Requests per Second" graph. Up to 15 users it steadily climbs up, but then there are valleys and hills, but the system struggles to serve more requests/s. 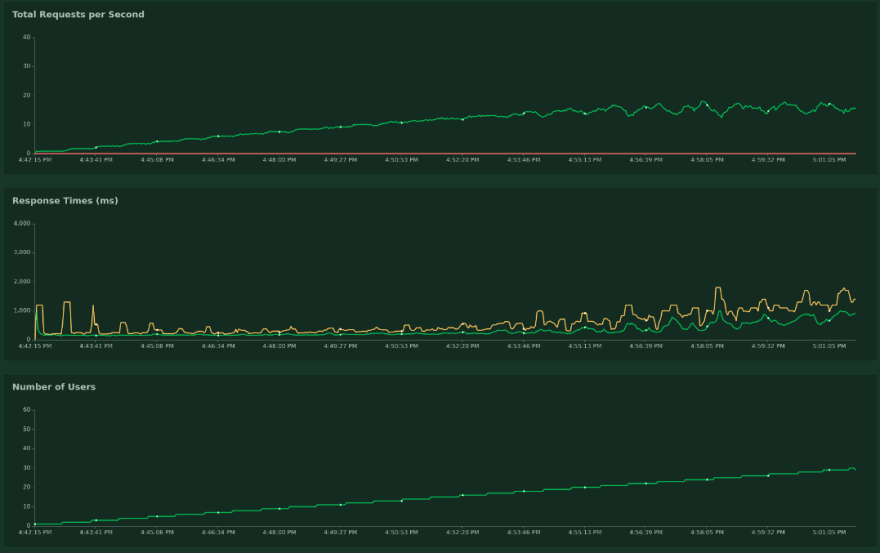 Run API tests with Newman and send reports to Telegram

Need help with automating your tests? Do you want to outsource the programming of UI, API or performance tests?

We are happy to help with UI, API or performance testing, retrofitting tests to existing project, and enable you to do BDD!

Once suspended, jankaritech will not be able to comment or publish posts until their suspension is removed.

Once unsuspended, jankaritech will be able to comment and publish posts again.

Once unpublished, all posts by jankaritech will become hidden and only accessible to themselves.

If jankaritech is not suspended, they can still re-publish their posts from their dashboard.

Once unpublished, this post will become invisible to the public and only accessible to Artur Neumann.

Thanks for keeping DEV Community 👩‍💻👨‍💻 safe. Here is what you can do to flag jankaritech:

Unflagging jankaritech will restore default visibility to their posts.