For Labs, typically a group will work with a nonprofit organization or local business to create a product that they can use. However, our group was tasked with a project a bit different. We worked internally with stakeholders from Lambda School to develop an MVP of the Lambda Alumni Network. The goal of this assignment was to create a unified, private community for Lambda School alumni to connect, advance their careers, and give back in a forum-like environment.

When we first started this project, we began with a code repository that was built for a single room forum where people could post interview questions. The ultimate goal was to create multiple rooms, so posts could be categorized into different topics. This meant restructuring the database to include a number of different data points, including rooms, posts, comments, likes, and users. Making sure to restructure any of the existing endpoints and adding all the new endpoints we would need proved to be one of the most tedious parts of the project. 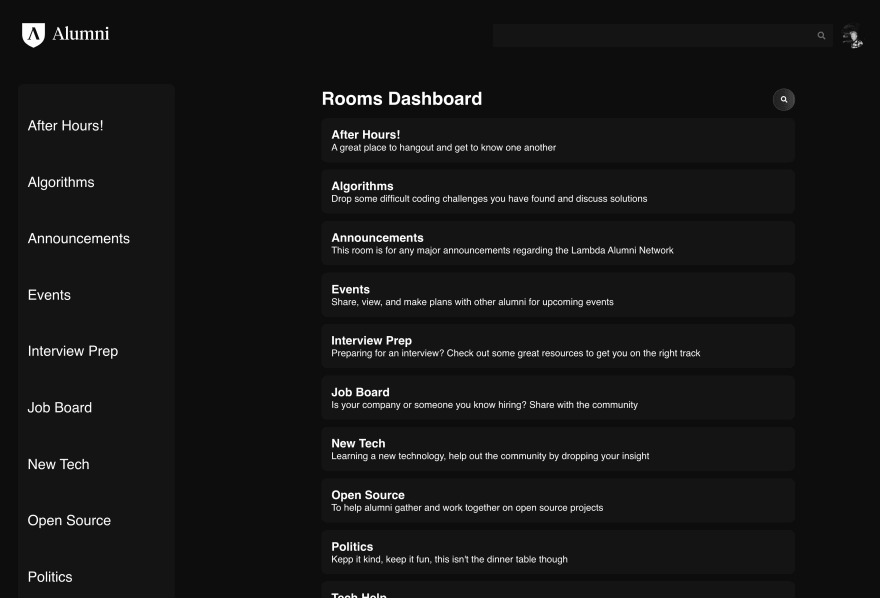 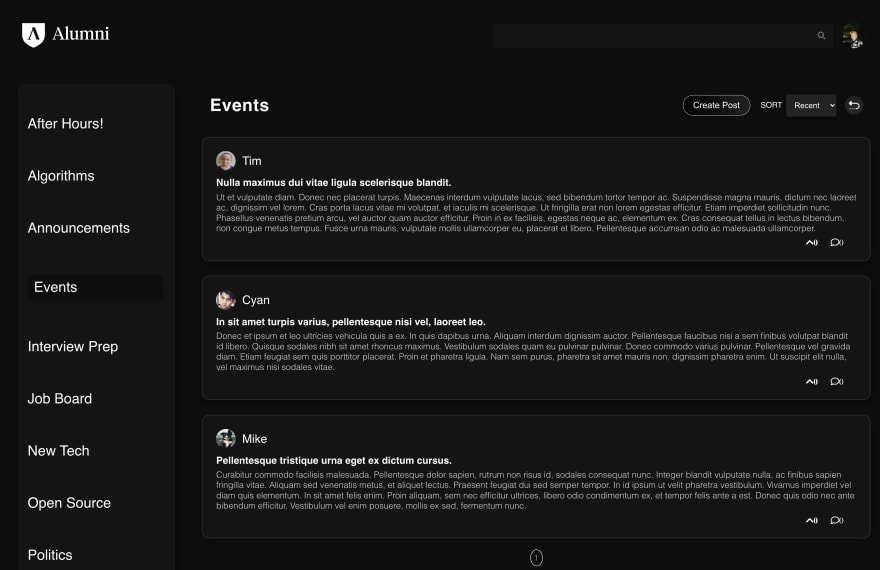 There were a number of different things that needed to be done to this project on top of restructuring the database. The entire frontend needed to be restyled to the standards of our design manager, and we also needed to create at least 25 more React components to hold all of the new sections we were adding to the app. Some of the main things that I focused on was that database restructuring from earlier, but also creating endpoints on the frontend so we could make sure there were connections to the backend. I also worked on setting up the deployment environment of the app with Heroku and AWS Amplify.

We spent four weeks building this project, and we added so many features it's hard to keep track. Some of the different elements that our team created for the Lambda Alumni Network were:

In the future, I can see another Lambda School Labs team taking this project even further. Since we were given a project that was close to greenfield, we spent a lot of time adding different things to push us towards an MVP. Now that our team has laid the foundation, I hope the next group can start to implement some features that we had thought of but did not get to do. An important step would be to implement tagging into the app and then allowing users to search by tags, so that posts are easily searchable. I also think adding some UI features could help bring the app to life even more, like a notifications bell. Finally, I think adding a light mode and mobile breakpoints to the app would be a great improvement that would help with the overall accessibility and usability of the product.

Throughout my time at Lambda School, we have spent one week every month working on a project. Labs was similar to this, multiplied by four. I feel that working on this project with an extremely hardworking team has given me a glimpse into what it will be like to work at a firm in the near future. I was able to work on a project that I really enjoyed and I think will benefit a large number of people in the future, and that is what I hope to do for the rest of my life.

Getting Started with Rails & TiDB

Publishing Android libraries to MavenCentral in 2021