This interactive tutorial about the resolution of conflicts in git is a continuation of my first blog in the series titled And then we resolve a merge conflict.... If you have not read it, please check it out here.

The aim of this tutorial is to show how you can use rebasing as an alternative to merging so to combine to branches in git. It will demonstrate how you resolve conflicts that occur thereof.

Every commit in github is based on its preceding commit. When you trace the history you realize that every commit has an ancestor.
Practically this is shown by that whenever you log the history of a branch, all the commits are listed in chronological order. With first commit at the bottom and the most recent commit which is the HEAD at the top.
Now, what rebasing does is it rewrites history of your current branch, through assigning a commit of your choice as the ancestor of the HEAD.

As indicated in the first blog to get started, we create a repo on github and initialize it with a README. Then clone it locally on my machine. After that, I open the project on an editor. My editor of choice is Visual Studio Code.

I then create and check out a new branch called list-interests. And create bio.txt. In bio.txt I add a list of my personal interests. Then voila: 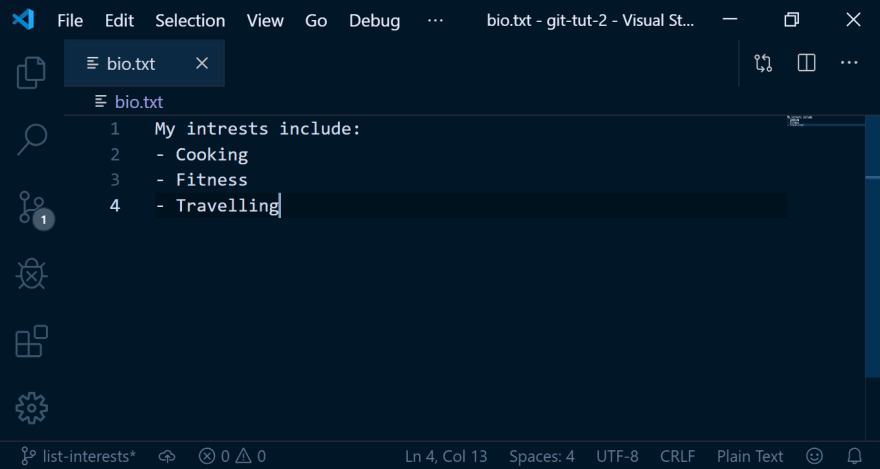 To stage the changes, on the terminal I run the command,

Then to commit the changes to my local repo I run the command,

Then to look up the history of the list-interests branch, on the terminal I run the command;

Now let's imagine that a bunch of devs was assigned to this project. One dev, in particular, was assigned to add an intro to the bio. The dev successfully created the intro and then proceed to merge it to master.

To mimic that, on the terminal run the command,

The command above listed above allows you to navigate to the branch you were in before you checked out your current branch.

On master I then create the file bio.txt. Then add a basic intro about myself. 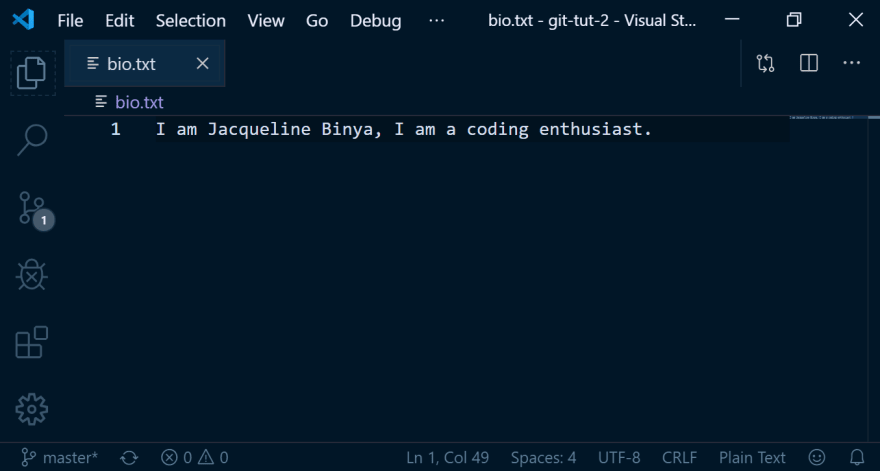 I then add the changes to the staging area by running the command below on the terminal.

To add the changes to my local repo,

Then I log the history by running the command;

Then to sync master to my origin/master which is the branch that corresponds to master on the remote repository;

To do that on the terminal I then run the command;

On the terminal I get the error message:

The above message informs me that git failed to merge then provides me commands I can use to resolve the issue.

On the editor, this is what is there: 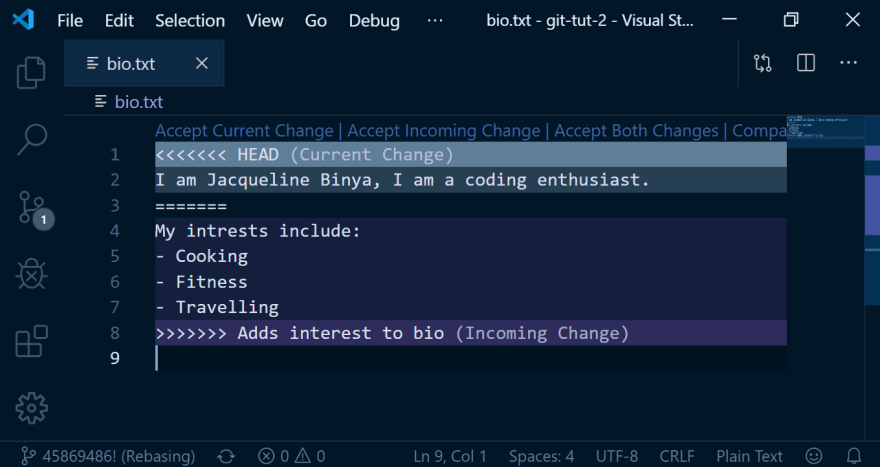 Because I want to keep both the changes, I select the option Accept Both Changes on VS code.

To continue I then add the change to the staging area, by running the command;

Then on the terminal, I run the command;

Then get the message

Under the hood when you rebase, git basically rewinds fetches the tip of master, places it in the position of the last commit of the branch you had checked out, then applies the tip of list_interests on master.

If you have conflicts you resolve them and then stage the changes. But instead of making a new merge commit when you run the command git rebase --continue the changes are applied to the HEAD, which in this case had the message Adds interests to bio. When you log the history you get:

I have successfully made a rebase. Rebasing offers a clean way to combine diverging branches and its main advantage is the history is kept linear, unlike when you do merge commits.

I then sync my local and remote. Make a pull request. Then merge my pull request to origin/master. On my local I checkout master then on the terminal run the command;

So as to sync master to origin/master. Then voila: 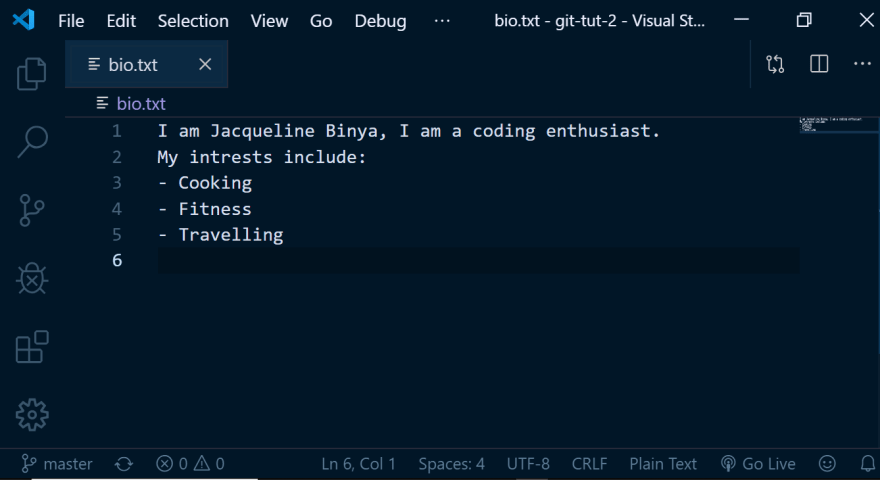 With that done, hopefully, you now have an understanding of how rebasing works in git. We now proceed to the main business of the day which is using rebasing to implement what we did on the first blog in the series.

Well, I would love to add a new feature to my bio. This time I will add a list of programming languages I have worked on. To do that I create and check out a new branch called list-languages. On the terminal, I run the command,

Then I edit bio.txt by adding a list of programming languages. 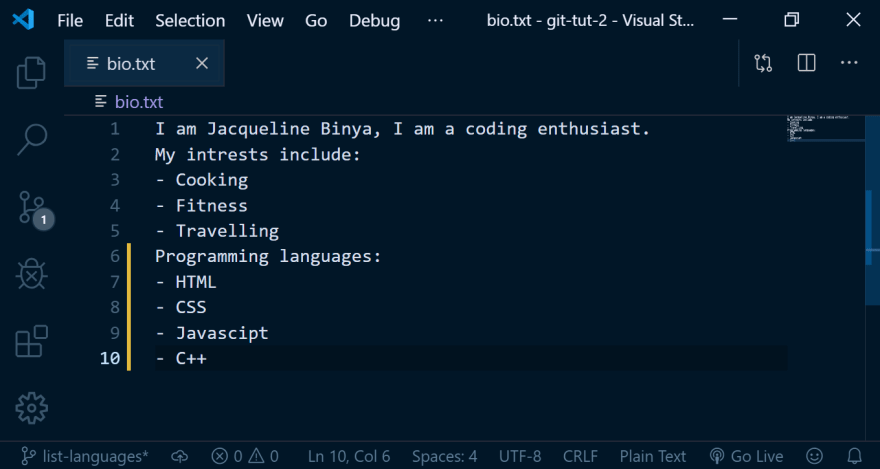 To proceed I then add the changes to the staging area by running the command;

To commit the changes to my local repo, on the terminal I then run the command;

To create a branch on the remote corresponding to list--languages and push changes associated with it. On the terminal I then run the command;

I just realized I made a blooper on my bio. Instead of adding C++, I meant to add C. But in the same regard, I want to keep my commit message.

So back on my editor, I edit my bio. 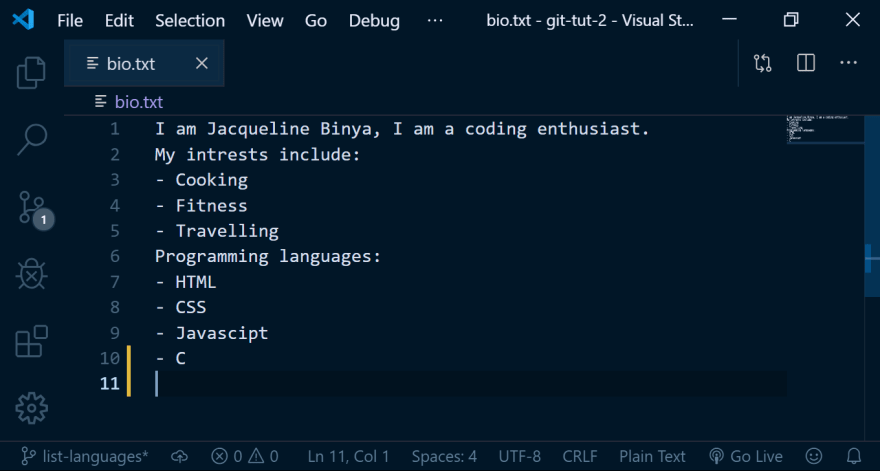 Now to stage the changes I run:

And to commit to my local, on my terminal I run the command:

As we know from the first tutorial git commit --amend --no-edit, alters the history of the branch. We end up with a scenario whereby the local and remote diverge from each other with the remote branch always leading.

When I attempt to sync my local and remote using:

I get this message as a response:

Before we proceed let's take a quick look at the history of the branch list-languages, using the command:

Basically when I run the command git push. Under the hood git attempts to sync my local list-languages to the corresponding branch on the remote origin/list-languages. Git is clever enough to realize that the branches have diverged, the remote is ahead of the local branch so it suggests I pull changes on the remote to my local, resolve any conflicts and push again.

To resolve the issue highlighted I run the command:

I added the flag --rebase to the git pull command so as to rebase the HEAD of my local on the tip of origin/list-laguages. This offers an alternative to merging branches.

On my editor this is what my file looks like: 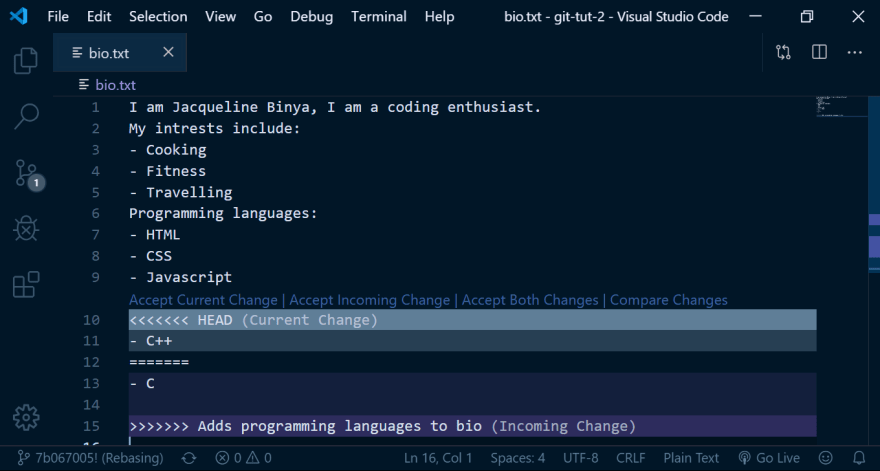 To resolve the conflict, on VS Code I select the option to keep incoming changes. I then add the changes to the staging area then run the command;

This is what bio.txt looks like on my editor: 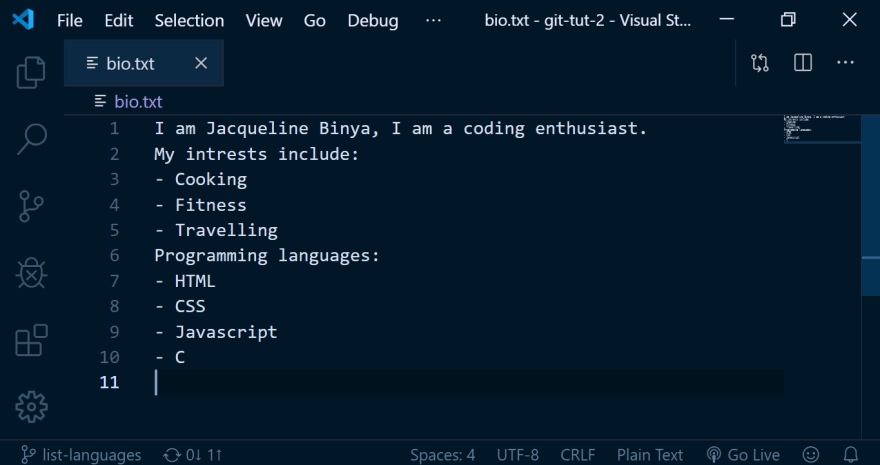 When I log the history on the terminal I get the output below:

I then sync my local and remote. Make a PR then merge it to master.

Thank you for reading my article.

What is version control? - 14 days of Git

Once suspended, jacqueline will not be able to comment or publish posts until their suspension is removed.

Once unsuspended, jacqueline will be able to comment and publish posts again.

Once unpublished, all posts by jacqueline will become hidden and only accessible to themselves.

If jacqueline is not suspended, they can still re-publish their posts from their dashboard.

Once unpublished, this post will become invisible to the public and only accessible to Jacqueline Binya.

Thanks for keeping DEV Community 👩‍💻👨‍💻 safe. Here is what you can do to flag jacqueline:

Unflagging jacqueline will restore default visibility to their posts.