The first interview I ever publicized was my chat with Kent C. Dodds. For the few of you who haven't had the pleasure, Kent is an Open Source engineer with a passion for teaching others.

Kent has built a career on being a resource for other developers, and during our chat, he gave me some excellent advice.

1. You're an engineer, not a developer

At one of my first jobs, I had heard that some less-than-ethical managers intentionally labeled their engineers as developers in order to pay them less. 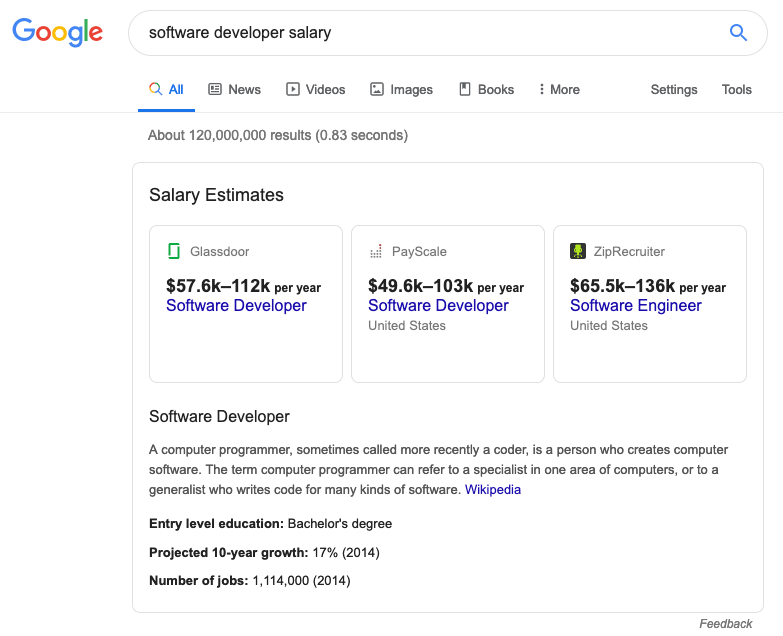 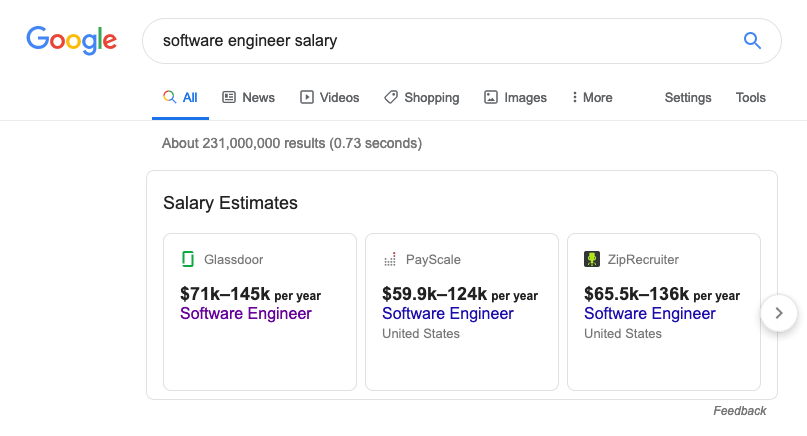 This screenshot reveals that Glassdoor and PayScale report a $10-20K US difference in the estimated salary floor. For this reason, even if your employer refuses to title you as an engineer, you should use the word engineer on your resume.

Kent expresses some other interesting thoughts on titles in the interview.

2. Part of seniority is faking it

Kent talked a bit about his experience stepping into his first "senior" role far before he was ready for it (by most measures). That experience led him to understand that at least some part of the path to seniority is most effectively described as an act.

This isn't to say that many of your senior coworkers and peers haven't earned that title, but it does imply that there is significant value for your career in presenting yourself as an expert.

They say you should dress for the job you want; I guess you should probably act as though you deserve it, too.

3. Perception is essential but can fuel imposter syndrome

As a follow-up to that advice about portraying confidence, overdoing it can backfire.

If you create a reputation as an expert, as Kent has done in the JavaScript community, it can be scary. People are going to see everything you say and potentially analyze it.

Kent described his fear when doing things as mundane as writing a Tweet.

Temper your desire to be recognized as an expert with your confidence in scrutiny. Especially if, like Kent, you tend to be quite confident!

Speaking at meetups was something Kent recommended as a bit of a hack for speaking because it is much lower commitment than trying to speak at conferences.

Generally speaking, Kent said it was reasonably easy to get a slot speaking at meetups. He talked about reaching out to organizers at random and even asking to speak the week of the event.

Giving a talk at a meetup can be a great way to increase your credibility without all the stress of speaking at a full-size conference.

5. Consume a lot of information

Another piece of advice that Kent gave had to do with keeping abreast of the industry.

Kent mentioned consuming a lot of content, even in areas that he didn't care to build expertise. Kent advised that it is smart to be able to hold a conversation on technical subjects, even if you aren't highly invested in them.

One of the things that people frequently notice about Kent is his otherworldly level of productivity. He writes a ton of content, records numerous videos, gives talks, and creates a ton of Open Source software.

A piece of his advice is embedded in that productivity. Steadily building small side projects will expose you to more practical knowledge and a deeper understanding of the technologies you're learning.

Expertise cannot be theoretical only; there must be a practical element to it!

7. Produce more than you consume

The act of producing is what truly solidifies your understanding of a subject. Kent embodies this with his educational content and his Open Source work.

Think of this as open-sourcing your learning process.

8. Take care of yourself and your relationships

Flash-back to Kent's insane productivity levels. Kent warned, during our conversation, that there is a genuine danger of sacrificing your health and your relationships in pursuit of your career.

He said that even though he was enjoying his work, there was no real fulfillment when compared with what he got out of his family life.

When push comes to shove all the rest of this stuff is for naught if you can't take care of yourself physically, mentally, and spiritually.

Kent is an expert on not only JavaScript but also building a world-class career, and his advice is priceless. I'd give this list to anyone looking to go from brand-new engineer to senior or leader because it's honest and well-rounded. Following these tips will not steer you in the wrong direction.

If you're interested in learning from veteran engineers like Kent, subscribe to my newsletter and follow along with the podcast. I have upcoming interviews with engineers all around the world who have built amazing careers for themselves.

The TRUTH about sexy; hot questions with real answers! Podcast